"Let Go or Be Dragged" 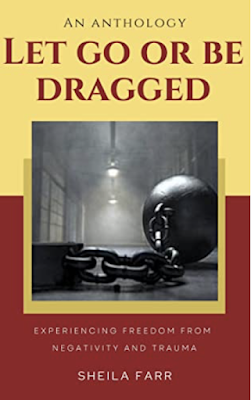 I am the most at peace and confident when I am writing. I am able to shut out the world and just receive the thoughts and words that result in something that I hope is worthy of consideration by my fellow inhabitants on this earth. I guess it's that part of me that is made in the image of God; the part that delights in creating the written word. I have shared before about the time a word from the Lord was spoken to me by a man I met only once. He told me the Lord wanted me "to be the pen, and not the blank piece of paper". He shared that God had made me to be a writer, and He wants me use my gift simply to please my Creator, and with no other reward in mind.

So, I have written an unpublished fiction book, an anthology about America under a pen name, a book on the Kingdom of God, and written this blog for 11 years. Now, I am happy [and humbled] to be involved with another anthology titled "Let God or Be Dragged", which includes stories by 13 authors relating how they experienced freedom in their lives from negativity and trauma. I daresay that everyone walking this planet has faced some form of these trials in their life. In the book, I relate a time in my early adulthood when poor choices resulted in a traumatic period of feeling like I was alone with no way to climb out of the hole I had dug for myself. I had to make a choice whether to let go, or be dragged deeper into that well of defeat. For me, Jesus was the answer. And that has had me thinking of the many examples we have in the Bible of men and women who faced that same dejected spirit; who found themselves downcast, disheartened and miserable. They, too, had a decision to make -- cry out to God or stay mired in the situation they found themselves in; whether by their own poor choices or other extenuating circumstances.

Four people come to mind: Job, Joseph, Moses, and Peter. First, let's take a look at the life of Job. He was a man who had it all ... wealth, a beautiful family, standing in the community. Then Satan asked God to allow him to test Job's faith. And he lost it all ... the money and livestock he had accumulated; a storm took his children; disease ravaged his body; and his wife begged him to denounce God. Talk about negativity and trauma! Everyone told him he should reject God and just die! Job could have let himself be dragged into the depths of despair and humiliation, but he decided to let go of all the bad advice and trust in God to deliver him. For thousands of years, the world has known the story of Job's faithfulness.

The next story we take a look at is about Joseph, the youngest and favored son of the patriarch Jacob. In his youthful enthusiasm, Joseph shares with his brothers a dream that he has where God shows that he will have great power and influence to help Israel in a time of significant trouble. But his brothers mistake his enthusiasm for pride, and they react in anger and jealousy, selling Joseph into slavery. This turn of events certainly qualifies as a time of negativity and trauma! But Joseph doesn't give into all the ways that the Enemy tries to divert his purpose. He never gives into the despair or the doubt that his long-ago dream was a mistake. He doesn't let himself be dragged into giving up, but continues to remain steadfast in who God made him to be, and rises to be Pharaoh's right-hand man, delivering Egypt out of a famine and saving his brothers and the families of Israel from starvation.

Moses is our next hero. His life covered the whole spectrum of negativity and trauma! Born to a poor Hebrew family, he is saved from a death warrant issued by Pharaoh against all Hebrew male babies. He then becomes an adopted son of Pharaoh, himself, only to lose all that power and position when He kills a man and is forced to flee to a life of exile and what he must have felt was failure. Did God really have a calling on his life? He tried every excuse in the book to convince himself [and God] that he was not fit for the job. But it was in that identity of disappointment and inadequacy that Moses came to know the face of Almighty God and surrendered to the sovereignty and majesty of YHWH. It took him a long time, but he was finally able to let go and step into the destiny God had reserved for him, and him alone. He would no longer let himself be dragged along by a spirit of insignificance. He found a way to climb out of the pit and scale the mountain!

Finally, I want to consider the disciple and Apostle, Peter. His story is one of great highs and disparaging lows. It may seem that he was plucked out of obscurity to become the leader of Jesus's disciples; that he was just a simple fisherman who won the lottery ticket of faith. But remember, Jesus has known the purpose for which we are created since the foundations of the world. Peter was very specifically chosen by Jesus. He knew all about the negative situations Peter would face, and was intimately familiar with the trauma Peter would witness and experience. But Peter was created and born to lead the early Church and he would not be dragged away from that divine assignment! He would learn to let go of condemnation and harassment by religious and political leaders. He would learn to let go of ego and pride as he embraced Jesus's mission for the Father. And he would learn to let go of self-condemnation and doubt for denying the Christ. He could have let himself get dragged along by the negativity of hopelessness after Jesus's crucifixion, but by the grace of God, he let go ... and became a spiritual force to introduce the Kingdom of God into a lost world. These men are just a few of the examples throughout the Bible that stand as witness to the power of God in our lives. 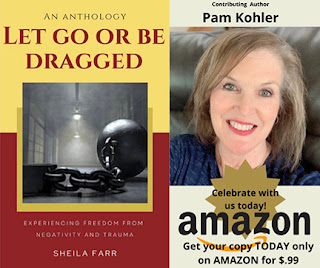 So, I would like to invite you to read this modern anthology of people who are overcomers.  My part of this little book points to Jesus as my strength to "Let Go or Be Dragged". Every story in this powerhouse of a book is unique to the individual author, and I think you will find inspiration, motivation, and courage in every narrative that is shared. It's not only the heroes of the Bible who overcome. We each have a story to tell, and I pray you let Jesus be the author of yours!

Here is the link to the e-book, Let Go or Be Dragged: https://amzn.to/3IAA8pz