The Words of Jeremiah Are For The Ages 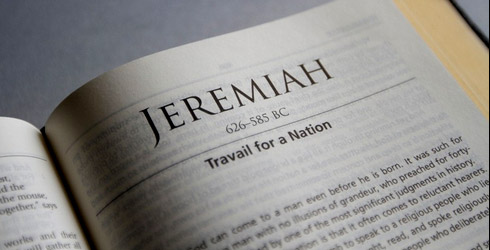 "For I know the plans and thoughts that I have for you," says the Lord, "plans for peace and well-being and not for disaster, to give you a future and a hope... I will be found by you, "says the Lord, "and I will restore your fortunes and I will free you..".  This is the familiar Scripture, Jeremiah 29:11 and 14; favorites of mine. In context, Jeremiah is speaking to the Israelites and telling them that the "plan" is that they are about to go into captivity for 70 years, but God will not abandon them.  There is hope for restoration. Jeremiah is calling out the false prophets who are proclaiming that everything is OK, and telling the Israelites they will not be taken to Babylon.  Through Jeremiah, God tells them "don't believe the lies." Jeremiah has the unpleasant task of warning the people of the coming judgment from the Lord due to their rebelliousness and wickedness. But the Lord also tells him to speak to the people, reassuring them that when the captivity is over, the Lord will restore them and bring them back to Jerusalem. They will seek Him with all their hearts and He will be found by them.

In the middle of sleepless nights, I hear my Lord and Savior encouraging me; telling me that whatever is going to happen in the coming difficulties; He has a plan.  He is sovereign in my circumstances, and if I seek Him with all my heart, He will listen and I will find Him.  My future abides in Him.

I wrote the above in 2011, but I could have just as easily written it today. I know I have said it many times before, but there have been days in the intervening years that I have identified with Jeremiah. No, not as a prophet. I believe that only Jesus can assign that office. But I have cried out to Him, because my spirit has sensed that we have been lied to by our politicians and our own false prophets. EVERYTHING IS NOT OK! I do not believe God is pleased with the state of the world, the Church, or many people who call themselves Christians. At the same time, I know He has not abandoned us, and His covenant promises of victory in Christ remain intact. But I do not want to see my fellow believers fall prey to the false hope that is being delivered by self-appointed prophets, and become devastated when we enter into our own captivity.

Just as in Jeremiah's day, present-day believers proclaim, "The Lord has raised up prophets for us". And these modern "prophets" speak of "Kingdom" and "Revival" and "Restoration"; all praiseworthy tenets of God's promises. But are they speaking the whole truth of what  God is revealing to us in these days? How can one point the Body of Christ to Revival and Restoration without warning that both are in jeopardy because of our idolatry of [and seduction by] the false gods of ecumenicalism, self-promotion, and a counterfeit "feeling" religion? It's as if what the Bible tells us is going to happen before Christ returns is just a story written for another time; it doesn't really pertain to us. If we just keep using the buzzwords "Kingdom","Revival", and "Restoration", we can pretend that what the Word says is not meant for us, after all!

So, instead, we will choose to believe that Jeremiah 29:11 and God's promises of peace, hope, and a future are meant for us, but choose to ignore that what He says just six verses later could also be a warning meant for us ... "Behold (listen very carefully), I am sending the sword, famine, and virulent disease (pestilence) on them, and I will make them like rotten figs that are so bad they cannot be eaten. I will pursue them with the sword, with famine and with virulent disease; and I will make them a terror (warning) to all the kingdoms of the earth, to be a curse, a horror, a hissing, and a disgrace among all the nations to which I have driven them, because they have not listened to and honored My words...".

Our God is the same God today as He was when He spoke those words to Jeremiah over 2500 years ago. His Nature, His Character, and His promises have not changed. Look around; really pay attention! The sword of war is upon the earth, and our nation is in the cross-hairs. We have already suffered through a traumatic season of virulent disease, and every prognosticator on the earth is warning of global famine. It is a very real possibility in the coming year! And lest you hear the lie that this Word from God was meant for ancient Judah in the Old Testament and was spoken under the old covenant, and it is said [again] that we are meant to experience Kingdom, Revival, and Restoration, I would ask that you hear the Word of Jesus in the New Testament and His foretelling of our future under the New Covenant ...

In response to the Disciples question of how we would know the time was near for Him to return, Jesus said, "Be careful that no one misleads you [deceiving you and leading you into error]. For many will come in My name [misusing it, and appropriating the strength of the name which belongs to Me], saying, ‘I am the Christ (the Messiah, the Anointed),’ and they will mislead many. You will continually hear of wars and rumors of wars. See that you are not frightened, for those things must take place, but that is not yet the end [of the age]. For nation will rise against nation, and kingdom against kingdom, and there will be famines, pestilences, and earthquakes in various places. But all these things are merely the beginning of birth pangs [of the intolerable anguish and the time of unprecedented trouble]".

But people are frightened when they hear these warnings, and they do not want to receive them; rather, they prefer what tickles their ears and makes them feel better. Those that declare themselves to be modern-day prophets, speaking only words of Hope in the return of Jesus and our victory, may not call themselves Christ or the Messiah, but they will declare themselves anointed. By whom? By the Lord? ... Or other men? Jesus, Himself, says there will be wars, famines, pestilence and "intolerable anguish and unprecedented trouble" [including persecution] before He returns. Just this week, Newsweek reported that a member of Finland's Parliament, and a Finnish Lutheran Bishop were charged with a Hate Speech crime for quoting from Romans in their defense of Biblical marriage. But the Helsinki District Court dropped the charges and determined it wasn't their job to "interpret Biblical concepts". But that's how dangerously close we are to religious persecution becoming a global entitlement. And do not think that our Constitutional right to free speech will be a safeguard when that anti-Christian agenda is whipped into a frenzy.

The times that we are living in are just as precarious as the times of Jeremiah. We have entered into a 21st Century version of captivity in Babylon that is no different than the ancient nation of Judah's experience. The question remains if God is going to turn this nation over to its captors for a time of judgment for abandoning Him and prostituting the blessings that He bestowed on this land. Make no mistake, I believe He has not abandoned us, nor will He turn His back on His remnant, anymore than He abandoned the exiles who would return to Jerusalem from their Babylonian captivity and restore the Temple of Jehovah. But, now WE ARE the temple! And God will restore His righteous remnant in these last days! That is our hope and our future! But WE MUST NOT BE UNPREPARED for God's judgment against those [in the nation and the Church] who misled, corrupted, and compromised His holy commandments.

If we are truly His people, we see and understand His whole counsel. And we will be united and stand strong through both the judgment and the restoration. So, I encourage you to read the Book of Jeremiah. Let the words of long ago feed your soul and spirit with the horror of our offenses against the God of the Universe. But let the ancient words also encourage and comfort you as we await our redemption and our restoration to holiness. We have never been promised that we would escape troubles, persecution, or even death. What we have been promised is a glorious inheritance in Heaven where we will be united with Jesus, and we will rule and reign with Him after He has defeated Evil on the earth. That is the hope and the future that I look forward to! Whatever I have to endure until then will be done through His strength in me, and with praise of Him on my lips. I know that He loves His own with an everlasting love, and He will continue His faithfulness to us until the day we stand in His presence. That is the hope that we can all believe in!

1 Corinthians 14:3     On the other hand, the one who prophesies speaks to people for their upbuilding and encouragement and consolation.