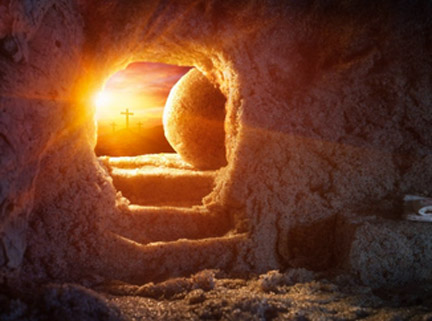 I was saddened, but not surprised, to wake up this morning to the New York Times headline, "In This Time of War, I Propose We Give Up God". Of all mornings -- Resurrection Sunday -- this newspaper chooses to publish an op ed article disparaging the One who has never given up on us.

Using the backdrop of the current war in Eastern Europe, the author [who self-identifies as a Jew] wants to blame the One True God of the Universe, and brand Him as hateful and brutal; even suggesting He should be labeled "a war criminal" for His part in allowing the suffering and oppression that is on display across the globe. The author states that we should stop trying to be like Him, and even goes so far as to suggest that we stop teaching our children about Him... they should "be as unlike him as possible". And then the article ends with this disgraceful statement, "Killing gods is an idea I can get behind".

First of all, I will pray for this person because I recognize the hopelessness that is in their heart, and the disillusionment they have experienced in their Jewish faith. I refuse to disparage anyone's faith -- unless it is rooted in Satan and his wickedness. But it grieves me when I see people express the emptiness they feel when they look upon Jesus. This day, of all days, speaks of the pain and agony He endured for our sake. It is a story of His horrific sacrificial death and His miraculous restoration to life, that He might sit at the right hand of Almighty God on His heavenly throne, interceding for us! And it is a gift to all who believe in Him; that we have the hope of eternal life with Him and the Father!

I am sorry that the writer and the paper chose today to publish this sad article. Today is so much more than a day spent in the midst of brightly colored eggs in foil-wrapped baskets, filled with chocolate bunny rabbits and stuffed animals. In fact, it is the one day that the entire foundation of our Christian faith rests upon. I would love to have a conversation with the disillusioned NYT writer. I would explain to Him that God has not "allowed" this war we are witnessing; or any other war in history. He does not use war to punish people, and this day does not honor Him as a warmonger. I would like to explain to the writer that humankind has an enemy that is not God. He name is Satan and it is he that comes to kill, steal, and destroy.  I want the writer to know and understand that it is Satan's actions that he [the writer] is attributing to God, who is the Most High among all the "little g" gods of the earth.

I would like the writer to know that, from the beginning of the Old Testament, the Godhead planned for Christ's birth, death, and resurrection. It was stated, "And I will put enmity (open hostility) between you and the woman, and between your seed (offspring) and her Seed; He shall [fatally] bruise your head, and you shall [only] bruise His heel" (Genesis 3:15). I would instruct the writer that the word enmity means hostility, bad blood, hatred, malice, and is the state or feeling of being actively opposed or hostile to someone or something... in other words, it describes WAR.

Genesis 3:15 is the first prophecy about the Messiah (Christ), who through His death on the cross, and His resurrection, would ultimately defeat Satan, the power behind all that the writer hates in the brutality, oppression, brutality, and war that he wants to lay at the feet of God. So, I would like to invite him [or her] to do some research on the true oppressor of this conflict/war. For I will find my hope in my God; the One True God who chose to come to earth to save me from those who follow the Enemy.

This won't be the last article calling for the death of the worship of God. Our Holy Book tells us so. And we, who celebrate the Resurrection of Yeshua Ha Mashiach today, know that hatred for Him will grow upon the earth. But we will endure and overcome as we weep over the wickedness in the world; struggle with our adversaries; minister to those who need hope in Him; and continue to find joy in the face of evil --- knowing that our Lord goes before us as we fulfill our assignments. Today is a day of eternal hope. No newspaper article will ever convince me to give up God. I pray that this writer has a supernatural encounter with Jesus which will find him writing an article of praise, reverence, and retraction. Let him see Your Truth, Lord! Happy Resurrection Day!

Romans 8:34   Who is to condemn? Christ Jesus is the One who died—more than that, who was raised—who is at the right hand of God, who indeed is interceding for us.