Why The Old Testament's History Speaks To Us Today 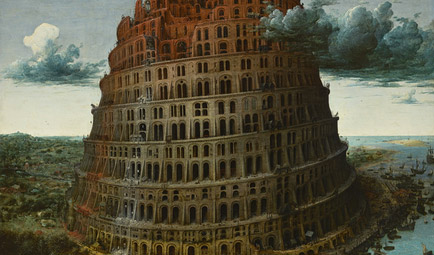 This week as our Home Church/Ekklesia meets, we will be diving into the Bible's Genesis, Chapter 11, which features a short exposé on Nimrod and the Tower of Babel on the plains of Shinar. We have also asked our group to read chapters 7-9 in the Book of Jasher, a book in the Apocrypha, which is a group of texts that aren't in the Canon, but have a thread related to the canonical biblical writings. Plus this ancient Book of Jasher is referenced in Joshua 10:13, 2 Samuel 1:18, and 2 Timothy 3:8.

I subscribe to the suggestion of Proverbs 25:2, which says, "It is the Glory of God to conceal a matter, and the glory of kings to search it out". Since we are called priests and kings in Revelation 5:10, it makes sense to me that God references this ancient Book so that we will search out more of what God wants us to know. Also, it fills in a lot of historical gaps in the Bible and, for me, actually helps me to better understand the lives of the Biblical characters, and see how it relates to modern man.

But the focus of this blog post is not extra-biblical and apocrypha books. It is about connecting what God is showing us at the beginning of the Bible to help us understand and see what is happening in what I believe are the rapidly approaching Last Days. I know the skeptical will say, "Why do you spend so much time delving into the Old Testament? We have a New Covenant with Jesus, and everything that happened before Him is obsolete for us." I have a different viewpoint.

The God of Genesis is the same God of the Book of Revelation. He hasn't changed, and everything about Him should be important to us. The entire Bible is meant for us to learn from; to learn His Nature and Character; to learn the strategies of the Enemy; to see how God has worked throughout history to reconcile Himself to His creation and restore us to our original purpose in Genesis -- to manage this earth as a colony of Heaven; to rule with the authority and dominion He gave us; and to make Earth look and act like Heaven. I find it extremely helpful to see the ways in which the Enemy tempted men to rebel, and then to go further and learn from the mistakes that men made out of their pride, arrogance, and lust for power and wealth. And we must not forget Jesus's warning, As it was in the days of Noah, so will it be at the coming of the Son of Man!

From the Bible we only get the hints of what it was like in the days of Noah. But when you add the historical background that the Book of Jasher provides, you see that the lives of Noah, Nimrod, and Abraham all overlap. For instance, did you know that Abraham studied at the feet of Noah? Abraham was the eight times great-grandson of Noah, and was sent to live with Noah when his life was threatened by Nimrod, who was the tyrant of ancient Babylonia, and his reign was wicked and brutal. He was the most powerful king of the ancient world, and Abram's father, Terah, served him as "the prince of Nimrod's host [army]". On the night that Abram was born, Nimrod's wise men and conjurers saw a very large star in the East sweep across the sky and swallow up the stars of the four corners of heaven. They said to each other, "This only betokens the child that has been born to Terah this night, who will grow up and be fruitful, and multiply, and will possess the whole earth, he and his children forever; and he and his seed will slay great kings, and inherit their lands" (Jasher 8:4).

Just like King Herod at the birth of Jesus, King Nimrod demands the death of the child, Abram. His father, Terah, secrets him away to live in a cave for 10 years, and then "when Abram came out from the cave, he went to live with Noah and his son Shem, and he remained with them to learn the instruction of the Lord and His ways, and no man knew where Abram was, and Abram served Noah and Shem, his son, for a long time" (Jasher 9:5). That's a lot of information that explains a lot of unanswered questions in the Bible. And for me, it explains why Abram listened to the Lord when He said, "Go away from your country, and your relatives, and from your father's house to the land which I will show you" (Genesis 12:1) and verse four that says, "So Abram departed [in faithful obedience] as the Lord had directed him".

Keeping in mind that in the culture of the time, "your father's house" could mean your ancestor's home (such as your eight times great-grandfather, Noah), and why Abram recognized God's voice. He was raised to know the Lord by Noah and Shem! And Abram would certainly have known of the wicked reign of Nimrod, who not only built the city of Babel, but other cities as well, and Jasher 11:4 says Nimrod "vexed the Lord, and rebelled and transgressed against Him". Verse 7 says he "continued in wickedness and teaching wickedness to the sons of men; and Mardon, his son, was worse than his father, and continued to add to the abominations of his father."

But it is not only the ancient books that give us additional information that supplements the Bible, but the writings of Josephus, a Jewish historian who was born just a few years after Jesus's crucifixion, and who provides a treasure load of cultural significance to the history of the Bible. Of Nimrod, Josephus writes, "Now it was Nimrod who excited [the residents of Shinar] to such an affront and contempt of God. He was the grandson of Ham, who was the son of Noah -- a bold man, and of great strength of hand. He persuaded [the people] not to ascribe [their prosperity and plentiful condition] to God, as if they could believe that it was their own courage which procured that happiness. He also gradually changed the government into tyranny -- seeing no other way of turning men from the fear of God, but to bring them into a constant dependence upon his power" (Chapter 4, Josephus's Antiquities of the Jews). Sound familiar?

Josephus goes on to write of Nimrod's arrogance and attempt to take revenge on God for what He had done to their forefathers; by building a tower to conquer God for sending the Flood and destroying mankind. These events that took place at the Tower of Babel have had a devastating effect on mankind ever since. Nimrod was the first to attempt to establish a totalitarian world government and religious system that discredits God and ruthlessly dominates the world. It resulted in the Kingdom of God versus the Rule of Man (sponsored by the kingdom of darkness). It has been the objective of Satan since the Garden of Eden -- a one world order that governs the earth through tyrants that he places in power. From Genesis to Revelation, it is a book of rebellion against God.

Throughout Biblical history [and the history of the world], it has been a story of man's attempt to thwart God's Sovereignty over His Creation. But, at every turn, we see the power of the Lord to stop the events that attempt to glorify mankind instead of Himself. And, so, it should not surprise us that we see it continuing in our own time here on earth. But we, who believe and trust in Jesus Christ, know how fruitless those attempts will be. We know the present plans, and all future plans, to dethrone God from the earth are futile and in vain. We know the truth of the Word and the historical testimony the Bible gives to the Divine Will of the Creator, and eventually, there will be a last rebellion of man against God, and every knee will bow and all mankind will be brought into submission to the Lord. We must pray that the growing rebellion we see across the globe will be quelled by the appearance of the Lord with His Heavenly Host! We will sing and shout praises of His Glory as we witness the defeat of Satan's influence in the earth, once and for all!

Philippians 2:9-11   For this reason also [because He obeyed and so completely humbled Himself], God has highly exalted Him and bestowed on Him the name which is above every name, so that at the name of Jesus every knee shall bow [in submission], of those who are in heaven and on earth and under the earth, and that every tongue will confess and openly acknowledge that Jesus Christ is Lord (sovereign God), to the glory of God the Father.