The Sea is Stirred Up, And The Waves Are Roaring! 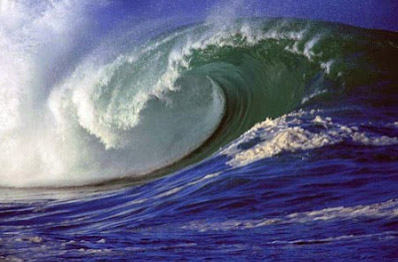 I cannot imagine that there is anyone on earth who is not aware of how close the world is to the brink of a global war. Not only are all the talking heads spewing their propagandized versions of the Russia--Ukraine warfare, but for the first time, we have first-person accounts from ordinary citizens who are engaged in this conflict. Technology allows innocent citizens to share their testimony of the horrors of war. No longer will the reflections of heads-of-state be our only witness to this war. The human toll will be center stage as the terror, panic and atrocities of war are recorded by those personally experiencing it.

Which makes it all that much more tragic. Who can turn away from the sights and sounds of men putting their families on trains, then turning back to pick up a weapon to defend their homeland? Or wives kissing husbands good-bye, not knowing whether it is the last time they will be together? And then there are the children, crying out for their fathers as they struggle to comprehend the heart-wrenching separation. You don't need to understand the language -- the human suffering is unmistakable; the pain understood by the language of our hearts... and it is the same as it has always been throughout the centuries of war on the earth. Only now we are eye-witnesses to it, and we share in that intimate pain and sorrow.

If you are like me, you might find yourself lying in the early morning darkness, praying for God to step into this conflict before it draws the whole world into a conflagration from which no one survives. I repent for all the things mankind has done to grieve our Creator; for the selfishness and greed that leads powerful men to seek more power, no matter the cost. I lament that we have allowed our hearts to grow cold to the needs of others, and that we have become so short-sighted that we seek the temporary treasures of this world, rather than our inheritance in eternity. And I pray for God's justice towards the men who embrace the Anti-Christ spirit and have joined forces with Satan's kingdom of darkness.

As I have been contemplating what our future might look like, I am reminded of a dream I had around 2008. It was so specific and disturbing that, at the time, I didn't know what to make of it. But I knew it came from God, and it's significance has become clearer in the intervening years. This dream was unlike any other;  it was so intense and so real, that I knew it was spiritual in purpose.  In this dream, I was on a beautiful beach with nearly pure white sand, and the beach was situated in a cove.  The best way I can describe it is if you took a map of the Gulf Coast of the United States, and flopped it, so that Florida was on your left. So, on one side of this cove, the land formed a peninsula that jutted out into the ocean, but I was protected from the roaring sea in this quiet cove. Then I became aware of a strange object in the water of this cove, and as only seems logical in dreams, I recognized it as a Ferris wheel.

At this point, I must tell you that I am not really comfortable in deep water, so it is understandable that  as I approached the Ferris wheel in my dream, I was filled with some trepidation.  But I finally climbed into one of the buckets and it began its climb towards the sky, where I could see the beauty of the calm water before me.  But as it descended, I knew I was going to have to brace for an entrance into the deep water of the cove, before the rotation of the Ferris wheel continued its circular motion upward. So, I experienced several rounds of relaxed enjoyment, followed by the anticipation and fear of going underwater. Looking back at this dream, I believe this was representative of what I have faced over the last years as God has awakened me to the knowledge that we are in the Last Days... periods of calm, serenity, and confidence, followed by times of fear, anticipation and dread as He revealed more of how He wants me to spiritually prepare. It also could be symbolic of the ups and downs of our economy for the last decade-and-a-half -- periods of prosperity and growth, followed by shortages, recessions, and inflation.

But then the dream took a different turn.  I exited the Ferris wheel, and ventured to walk from the cove and around to the other side of the peninsula. I felt drawn to the open sea, even though the sheer size and mass of the ocean frightened me. I stood looking at the ocean, mesmerized by its power, and then I noticed far-off in the distance, a small wave approaching. I stood there, almost hypnotized, watching this wave growing as it approached me until, shaken from my stupor, I realized that the swelling waves were going to swamp the shore on which I stood.

Despite being fearful of the ocean and deep water, I knew that I had to try to escape and swim to safety. The next thing I became aware of in my dream was swimming as hard as I could and looking back over my shoulder to see that wave coming ever closer with such speed and height. At last it reached me and came crashing down on top of me, tumbling me over and over, and dragging me into the depths of the ocean. I was so scared, and fought to hold my breath, finally resigning myself to the fact that I was going to drown.

Even in my dream state, I could feel my heart beating wildly and could sense my acceptance of death. Then I felt strong arms scooping me up in those deep waters, and of being cradled.  I heard a voice say, "It's all right.  There's no need to be afraid. I have you."  Then I had a fleeting moment of such profound peace, freedom from fear, and of being completely loved before waking up. I know, without a doubt, that this dream was confirming that, yes, there is a wave building across the globe, and it will come crashing down upon the world. There will be moments of panic and terror, but I am to rest in the knowledge that this fear will be fleeting. I will be secure in the arms of my Lord, who will literally save me from drowning in the chaos and evil of these days.

Nothing has changed in the intervening years, since I had the dream, to give me a different insight into the prophetic meaning of it.  Before our very eyes we are witnessing upheaval in our monetary systems, the erosion of independent sovereign nation states; and our social institutions and international relations are decaying.  The institution of marriage, that began in the Garden of Eden, has been redefined.  And the sanctity of life is sold for corporate profit.  As Paul McGuire, a prophecy expert, described the world in 2008, "It’s as if the world has been set on fire by chaos or crisis of every kind; financial crisis, terrorist crisis, racial crisis, moral crisis, religious crisis and even a crisis in our weather patterns." And we are 13 years further down that road!

So I know that many of you are feeling the effects of what we are witnessing in world events. But I'm here to tell you we don't have to succumb to fear or paranoia.  The love that I felt in that dream is real, and there is power and deliverance in it!  I can still feel the peace of being in the Presence of Jesus! We have been called by God, before the creation of the world, for a time such as this.  And the years since that dream have shown me that I have work to do in the spiritual war that is waging in, and around, and above this world. That's part of my purpose for being here, at this time and in this place. And I know for certain that God and Jesus will see us through whatever is coming, and we have been promised that the gates of Hell will not overcome us!  Just remember this: that wave may have come crashing down on me, but I landed in the strong arms of my Savior and He assured me that He would not let go. If you belong to Him, His promise is the same for you!

Luke 21:26-26   And there will be signs in sun and moon and stars, and on the earth distress of nations in perplexity because of the roaring of the sea and the waves, people fainting with fear and with foreboding of what is coming on the world. For the powers of the heavens will be shaken.