Wickedness on the Earth: Do We Really Understand the Depth of It? 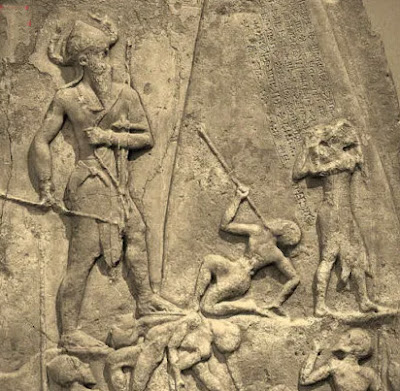 "And God saw that the wickedness of man was great in the earth, and that every imagination of the thoughts of his heart was only evil continually". We 21st Century Christians will recognize this verse as immediately following the controversial Genesis 6:1-4 revelation of fallen angels mating with human women to produce a race of giants called Nephilim. We know that it so greatly grieved God's heart that He regretted creating mankind and He determined that He would destroy all men, animals, crawling things, and birds of the air from the face of the earth. And then came The Flood.

From our Sunday School classes, we know the rest of the story ... or we think we do. Noah builds an ark, and as the only righteous man on earth, God saves him and his family from the 40-day flood, and then commands them (and all the living creatures) to go forth, be fruitful, and multiply on the earth. I think most Christians assume that the evil Nephilim perished in the Flood, and wickedness and corruption were reborn through some genetic carry-over from the Nephilim bloodline.

But here we are, somewhere around 4300 years later, and those events are regarded almost as folk lore -- even if they're believed at all. The stories of a race of hybrid giants born to fallen angels and human women [in Genesis 6], and our God so grieved over the state of wickedness in the race of humans He created that He determined to destroy them [in Genesis 7], are viewed, even by Christians, as seemingly disconnected and autonomous from our reality in the 21st Century. We convince ourselves that there's nothing in our existence that compares to the wickedness that occurred then. Every evil thing that happened before the Flood was destroyed and God simply pushed "restart" with Noah. Sounds simple, right? But how did mankind get back off track so easily? Can we simply blame the devil for tempting man to sin?

I think it's quite apparent that Evil is still alive and well in our modern world. We may not understand its origin or source, but those who have been redeemed by Jesus are familiar with the Scripture that tells us "we do not wrestle against flesh and blood, but against the rulers, against the authorities, against the cosmic powers over this present darkness, against the spiritual forces of evil in the heavenly places" [Ephesians 6:12]. But do we even have a concept of who or what those titles mean? Are we so removed in time or spiritual adeptness that we are oblivious to the identity and effect these evil forces have had down through the ages? That what was "then" is still at work now?

It has been interesting to delve into the ancient writings and see them hinted at in the Bible. It's like seeing puzzling reflections in a mirror. I know there is more definition than what I am seeing, but it has been blurred or obscured by thousands of years, corrupted theology, and Satan and the fallen angel's attempts to counterfeit the government of God. The Bible records the sanctified partners of our Holy God ... Seraphim (Isaiah 6:1-7); Cherubim (Genesis 3:24); Thrones, Dominions, Rulers, Authorities (Colossians 1:16); Powers (Ephesians 1:21); Principalities (Romans 8:38); and Archangels and Angels (I Thessalonians 4:16 and Luke 22:43).

But remember that Lucifer served God in the Throne Room, so when his pride led to his ejection from Heaven, he was able to commit spiritual forgery with the deceived angels who followed him. These condemned ranks of spurious angels would become the forefathers of the Nephilim race of giants, and they were alternatively known as Watchers, Archons, and Rulers. These are the rebellious angels that Jude is referring to when he calls them, "heavenly messengers in rebellion who went outside their rightful domain of authority and abandoned their appointed realms. God bound them in everlasting chains and is keeping them in the dark abyss of the netherworld until the judgment of the great day."

According to ancient Jewish lore, Azazel was the leader of the 200 angels who followed Lucifer in his rebellion. He is charged with teaching mankind the art of war, the art of jewelry, all forms of conceit and arrogance, metal work, medicine, promiscuity and illicit sexual pleasure. He is represented in the Hebrew ritual as the "scapegoat"; plunged over a steep cliff as a reminder to the people of his perpetual punishment for all sins of rebellion and transgression in the pre-Flood world. It was Azazel who commanded and taught other rebellious angels to infiltrate the earthly realm with corrupted heavenly knowledge that held forbidden secrets for mankind. They did it by seducing the women they slept with and teaching them enchantments, root arts and magical arts; astrology and secrets to the zodiac signs; the art of building instruments of war and killing (swords, breastplates, knives and metalworking); secrets to herbs and spices; using paper and ink for spurious purposes; the depths of evil and spirits, and abortion.

All this led to an increased ignorance of God, and a loss of the concept of the difference between war and peace. The women began to murder their children through abortion, as they participated in initiation rituals to a new religion, the bull cult of Poseidon. Idolatry led to sexual immorality, which led to adultery, and treachery. The Book of Wisdom, also known as Wisdom of Solomon is considered by the Catholic Church, the Eastern Orthodox Church, the Oriental Orthodox Churches, and the Assyrian Orthodox Churches of the East to be a canonical book of the Old Testament. These churches were founded mostly from 200 BC–AD 70, before the definite separation of the Christian church from Judaism, and are therefore some of the earliest churches teaching Christian theology. They take note of what the Book of Wisdom says about the influence of the corrupted Watchers in the Pre-Flood world: "Everything was a complete riot of bloody murder, robbery, deceit, corruption, unfaithfulness, disorder, falsehood, harassment of innocent people, ingratitude, moral decay, sexual perversion, broken marriages, adultery, and immorality. The worship of idols, whose names should never be spoken, is the beginning and the end, the cause and the result of every evil".

The Nephilim, the offspring of the utterly and unnatural union violating God's created order of being, were so ferocious and terrifying that the people of the Pre-Flood epoch fled before the tyranny and intimidation because they feared for their lives. They also fled from their convictions of the true God because they lived under a powerful and totalitarian regime. They lived under the evil dictatorship of cruel and corrupt giants who soon became the Kings of the land -- whose descendants would one day become the Nephilim giant kings that Abraham, Moses and Joshua would battle. Because of their unbridled violence, plundering, and slaughter, the omnipotent, true God, exercised His divine judgment to stop the carnage through the manifestation of The Flood.

But here is the point I want to get to, as I wrap up this deeper, historical explanation of the significance of Genesis 6 and 7 ... we should not be so naive to think that this level of wickedness vanished in the aftermath of The Flood. The arrogance, the idol worship, the tyranny, the rituals, the mysticism all survived! It was taught by the fallen angels to earthly women and their offspring, the Nephilim. Most of us probably believe that the Nephilim were wiped out by The Flood, and their influence was washed from the face of the earth. But the Book of Enoch [in Chapter 15] says, “Now the giants [Nephilim], who have been born of spirit and of flesh, shall be called upon earth evil spirits, and on earth shall be their habitation. Evil spirits shall proceed from their flesh, because they were created from above from the holy Watchers was their beginning and primary foundation. Evil spirits shall they be upon earth and the spirits of the wicked shall they be called. The habitation of the spirits of heaven shall be in heaven, but upon earth shall be the habitation of terrestrial spirits, who were born on earth. The spirits of the giants [Nephilim], shall be like clouds, which oppress, corrupt, fall, contend and bruise those upon earth.”

So, this appears to be describing the disembodied spirits of dead Nephilim, to be called what we know as demons. And I know that the Book of Enoch is not considered canonical Scripture, but since it is referenced in Jude, I am willing to consider that God verifies it as a historical resource. Then there is the curious wording in Genesis 6:4 ... There were Nephilim (men of stature, notorious men) on the earth in those days—and also afterward—when the sons of God lived with the daughters of men, and they gave birth to their children. These were the mighty men who were of old, men of renown (great reputation, fame). If we yield to the assumption that Noah and his family were the only survivors of The Flood [and there are disparate views on that hypothesis], then how could the Nephilim be on the earth? As disembodied evil spirits, called demons, is the most probable answer.

I submit this hypothesis to you with the purpose of suggesting that the depth of wickedness on the earth was greater than we have been taught in our churches. And the result of that wickedness and rebellion against the Creator of the Universe [and everything in it] has led to cruelty, tyranny, the murder of innocents, and all kinds of perversion and corruptness. It's all been part of Lucifer's revenge. And until his final judgment, he and the spiritual forces that align with him will continue to wreak devastation, destruction, and desolation on the earth and its inhabitants. We can still see mankind falling under the influence of the original Rebellious One and his army of subordinates. We must never forget that these rebellious angels did not foresee God creating the resurrection of human-kind into the eternity and the spirit realm of heaven through the Word, Yeshua HaMashiac. We may soon encounter the same level of evil that precluded The Flood, but like Noah, we will be delivered from its intended purpose, and we will emerge triumphant, declaring the Majesty and the Power and the Glory of the One True God. Keep the faith and stay focused on Eternity!

I wish to give thanks and much credit to author Gary Wayne, for his extraordinary knowledge and research on this subject. Be sure and check out his website, genesis6conspiracy.com.

Matthew 25:41    Then He will say to those on His left, ‘Depart from me, you cursed, into the eternal fire prepared for the devil and his angels.'