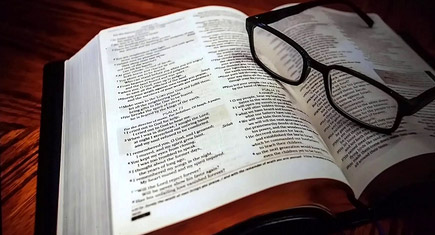 I've always loved the study of history, both in the modern age and ancient Biblical history. I've got an inquisitive mind and am not likely to accept a tradition or ritual simply because the masses are willing to believe whatever explanations are given to them. And I have been guilty of spending hours and days chasing down meanings of words and the cultural context of ideas and philosophies. In the past week, here are two that have kept me occupied ...

I'm always fascinated when new terminology seems to take the Body of Christ by storm. All of a sudden, it will seem as if a word or phrase comes into vogue and it becomes the latest buzzword in Christian circles. It may be a term that has been around for awhile, but it is as if it suddenly has a light shined on it, and its popularity soars. Such a word (to me, at least) is kairos. If my understanding is correct, this word (in Biblical terms) refers to "an appointed time"; ostensibly by God. It represents the right season or a fitting opportunity.

Crosswalk.com gives an excellent example of how the Body of Christ would understand this word in Scripture. For example, in Luke 1:20, Zechariah didn’t believe the news when God’s angel revealed Zechariah’s wife, Elizabeth, would give birth to a prophet, so the angel told Zechariah he would not be able to speak until this miracle did indeed happen. As the angel said, “And now you will be silent and not able to speak until the day this happens, because you did not believe my words, which will come true at their appointed time” (Luke 1:20). The original Greek used here was kairon, a version of kairos, translated by scholars into English as the “appointed time [or season].” Further in the article, it is explained that kairos is also seen as "the time seen from the divine side."

I have also heard it referenced many times that this season we are in, the season of birth pangs leading up to the Day of the Lord, is a kairos time -- fixed [in time] by Him, and to be used for His purposes. We may not know the day or the hour of these specific God-ordained times, but we should be sensitive and discerning of them; knowing that they are favorable opportunities given to us [by God], and recognizing that they are given to us to share God's will and His glory.

So, I found it interesting when Crosswalk referred to seeing kairos "from the divine side". Of course the word divine recalls a meaning of "godlike". But, did you know that there is a significance to the word kairos that is not Biblical? Did you know that Kairos was celebrated as a god in Greek mythology?  According to several websites I researched, he was usually considered the minor son of Zeus, and half-sibling to Hermes. The website, Greek Gods and Goddesses, says that Kairos was the Greek god of opportunity, and was in fact, considered a spirit. He personified the favorable moment which comes and passes quickly.

I also found it interesting that in front of the ancient stadium at Olympia there were two altars, one dedicated to Hermes and the other one to Kairos. The stadium was a holy place to the ancient Greeks, where all the sports activities were dedicated to the god, Zeus. Kairos was seen in the intelligence of Athena, in the love of Eros and even in the wine of Dionysus. Later, in the genealogy of the gods, he seems to be associated with all of them, as a manifestation of a specific moment. Now, I do not point out the association of a false god in the Greek pantheon as a way to discredit our Christian notion of a kairos moment; and I do not mean to suggest that the connection equates our Most High God with the worship of false gods. I merely wanted to show you that we in the 21st Century are not always the innovator of our theology. Nor do we always have a full understanding of the context of our belief system.

And speaking of theology, that idea is also evident in the second terminology that I found myself researching with a heart to know more about its origins. It is commonplace among Christians today, during the sacred ritual of baptism to have it spoken over them, "I baptize you in the name of the Father, the Son, and the Holy Ghost". Yet, when the Holy Spirit falls on the 120 or so disciples of Jesus at Pentecost, the multitudes of Jews who were there for Passover, heard them telling of the mighty works of God in their own languages. They asked Peter and the apostles, "What shall we do?" Peter said to them, "Repent and be baptized every one of you in the name of Jesus Christ for the forgiveness of your sins, and you will receive the gift of the Holy Spirit." Why would the Bible record Jesus giving His disciples one instruction in Matthew 28:19, and then record Peter, who had received that instruction from Jesus, giving a different command in Acts 2:38?

Once again, we, in the 21st Century, should not assume that our "formula" is necessarily correct just because we are supposedly an advanced society. I know the differences in these two Scriptures has been a stumbling block within the Body of Christ and caused needless conflict. We can get a historical perspective by understanding the following ... we need to recognize that our Bibles have been translated and re-translated many times. That doesn't mean I am saying the Bible is corrupt. I acknowledge that the Spirit of God will always give us correct revelation and interpretation of God's Word. But it is also true that Satan has influenced men to try to change the understanding of Scripture and it is up to us to search out the truth of what God wants revealed. That being said, in reality, both of the baptism Scriptures can be seen as correct when looked through the lens of historical and spiritual perspective.

Let's look at how the historical and the spiritual intersect. Baptism was nothing new to those participants at Pentecost. It had long been a purification ritual for pagan conversions into Judaism. It was seen and practiced as a cleansing water-washing initiation by different sects of Judaism, by John the Baptist, and by rabbis, who all baptized their disciples. But when Jesus gave His Disciples the Great Commission in Matthew 28, He was distinguishing His baptism from all others, declaring that it was to be conducted with the full authority of God in Heaven, and in all the fullness of Him (as Father, Son and Holy Spirit). It was spoken by Jesus as a command that would bind all nations under the fullness of the Godhead. When Peter was given the opportunity to instruct the multitude gathered in Jerusalem for Passover, his assignment was to bring these Jewish people to and understanding [of], and submission [to] Jesus, the Messiah. Jesus came to the nation of Israel. To expect them to understand that He had ultimately come for "all the nations" would have lost them and impeded the process of their coming to Christ as the Messiah.

So, in theory, both expressions are correct. Jesus is both the Messiah that Israel has been waiting for, and the fullness of God (Father, Son, and Holy Spirit) in one person that has come to the nations. It is appropriate to baptize someone in either name or names. I am a woman, a wife, and a sister. But I'm not three separate persons. All those "names" identify me as the one person named Pam. They represent different parts of my identity and character. So it is with Father, Son, and Holy Spirit being identified as the ONE, true God. I don't really get worked up over which is the correct usage for a baptism.

But there is another concept I want you to consider. In the First Century Church, Messianic Jews were a significant portion of the "Body of Believers". They accepted Jesus as the Messiah and followed His ways. But as he always does, Satan seeks to cause conflict and division among God's people. That came to a climax in the 4th Century when the Emperor Constantine, who hated the Jews, sought to drive them from Christianity. Knowing their religion was monotheistic (in contrast with the polytheistic nations who worshiped multiple gods), Constantine changed the baptism tradition so that people were baptized in the Father, Son, and Holy Ghost, rather than in the name of Jesus. He caused confusion by instituting the religious concept of the Trinity (intimating that Christians worshiped three Gods instead of the one God, YHWH, of Judaism).

I bring these two ideas to you in the hope that you can appreciate how important it is that our spirits be at one with the Holy Spirit; seeking His guidance for the context and the culture of Scripture. In the end, neither of these two ideas I've presented should change anyone's faith. But I have found that a fuller knowledge of history and the Bible can enhance our opportunities to witness to someone who doesn't know Jesus, or who doubts in the importance of faith in Him. As Christians, we must be able to defend our faith and be prepared to answer the sometimes unanswerable questions to bring someone into the Kingdom of God. So do not embrace skepticism, but seek Godly knowledge and wisdom. You just may be the instrument God uses to give eternal life to someone.

2 Timothy 4:2    Preach the Word of God. Be prepared, whether the time is favorable or not. Patiently correct, rebuke, and encourage your people with good teaching.