Genesis ... The Creation [and Re-Creation] of the Earth 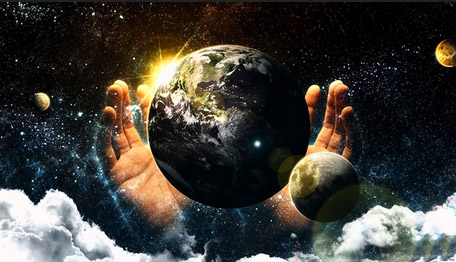 In case you are wondering why I am so focused on the Book of Genesis in this season of time and in this series of posts, it is because this book sets the stage for the rest of the Bible, as well as the history of mankind. If you have a discerning spirit, then you are probably wondering about the state of the world and this nation, and may be confused about how we got here. As I reveal some deeper truths within Genesis, I believe that the present state of affairs will become clearer. So hang with me, as I follow the rabbit trail through man's earliest history and pick up the puzzle pieces along the way!

Today, I want to share my thoughts on the "gap theory". That's the controversial and disputed premise that there is an undetermined gap of time between Genesis 1:1 and Genesis 1:2. If you've never heard of this argument, I'm not surprised. This thought is usually ignored by the mainstream Church, or at least relegated to the "New Age" or "Unbiblical" category of Christian apologetics.

But, I do not think we should intentionally disregard it, especially when you approach it from a serious desire to understand God's creation of this planet we live on. And, for me, it shows an important facet of God's character. So, let's just dive in. In the beginning, God created the heavens and the earth. How many of you, like me, took this verse for granted for far too long? That verse is easy and straightforward, I told myself. What more could there be to understanding that simple sentence? We know God created the universe, which exists of heaven and earth. What more could I possibly derive from this first verse of the most important book ever written for mankind?

Well, let me share what a heightened curiosity and diligent study can provide. I credit much of what I'm about to share to the immense amount of time that my husband, Mark, has put into developing his Biblical worldview. And it all started when a dear friend that he was trying to reach for Christ asked him a question about where the dinosaurs fit into the Bible -- and he couldn't answer it. That deeply troubled him, so he made a decision that he would never again be at a loss to explain what our Bible reveals about God or his character. That led to a several-year-long study of trying to understand the original language of the Bible and filter it through the versions we have today. So, as he would tell you himself, don't take what I share today as me saying you should believe the research that he [or anyone else] has done. Instead, let it spark your own hunger and do your own investigation to come up with your own biblical worldview. In these days of secular, religious, and political push-back, it will serve you and the Kingdom of God well to know what you believe and why.

"In the beginning" in Hebrew is Bereshith, and the correct use of the word is in an "old world" or previously existing world/old world context. Fully exegeted, it translates "what can be seen before this age was created". If this understanding is accepted, that means the Bible is referring to a time period before Adam and before Lucifer's fall from Heaven, and before the earliest time of this earth.

Next, do we understand what is meant by the word "God"? In the Hebrew, that word is translated Elohim, and it is plural. It is the Divine Ones reflecting divine majesty and power ... Father, Son, and Holy Spirit, all involved in the creation. In the Hebrew understanding, it is also acknowledged to be not only God, the Creator and Ruler of the World, but "superhuman beings including God and angels, who are called "sons of God" or "sons of gods [angels]". If that's not blowing your mind yet, this idea of Elohim will come into play later in that most contentious of verses, Genesis 6:1-4. For now, let us stay concentrated on the creation of the heavens and earth.

Which takes us to that powerful word "created". It is Bara in Hebrew and means "to create from nothing". Only the Supreme God of the Universe could do that. He didn't take something that already existed and form the heavens and earth. He spoke it into existence! As men, we can only create by starting with matter that YHWH created. He used no pre-existing matter or ideas from an earlier creation. He declared them to be, and they were.

Now we take a look at the heavens and earth. Heavens is plural and exists of the three heavens the Bible reveals to us. The first heaven is our sky and atmosphere (Genesis 6:7 and James 5:18). The second heaven is beyond our atmosphere and extends into the realm where spiritual warfare takes place between Satan's angels and God's angels (Matthew 24:29 and Ephesians 6:12-13). The third heaven is where God resides and where His and Jesus's thrones are (Deuteronomy 10:14, Hebrews 8:1, Acts 7:55, and Hebrews 9:24). In Genesis 1:1, the Hebrew word for "earth" is Eretz, and is translated land or material world. If you can wrap your mind around all that, then hang on because next we're going to tackle Genesis 1:2!

It reads, The earth was without form and void, and darkness was over the face of the deep. And the Spirit of God was hovering over the face of the waters. As we break it down in the Hebrew, I think you are going to be astounded at the picture that begins to emerge. The words "without form" are translated tohuw in Hebrew, while the word "void" is translated as bohuw.  In English, tohuw and bohuw is rendered "a desolate wasteland; an empty ruin; formed out of chaos; an indistinguishable ruin". Does that sound like a place that God would consider worthy of establishing His Garden of Eden or placing His creation of man? If today, we consider ourselves ambassadors of the Kingdom of God on earth, then this desolate place in Genesis 1:2 is not worthy of being a representation of God's Heavenly Kingdom! So what happened?

Scripture goes on to tell us that darkness was over the face of the deep. The Hebrew word for darkness is chosek, and it means "misery; destruction; death; sorrow; and wickedness". I'm sure that none of you think God would speak that into existence as a representation of His creative spirit! If His creation becomes "dark" [desolate, empty, a ruin, and chaotic], then we can pretty well understand that it was corrupted by evil -- in this case, most likely Lucifer being expelled from Heaven and cast down to make this pre-existing habitat his home base. Furthermore, there is an understanding that chosek means an evil that is combined or linked with judgment.

The word "deep" is the Hebrew word tehom, meaning an abyss (as in a surging mass of water). The rest of verse 2 tells us the Holy Spirit was "hovering" over the face [surface] of these surging waters. The word "hovering" means "a shaking or a tempest" in Hebrew. So we get a pretty precise picture of what Genesis 1:1 and 1:2 are trying to show us. These two disputed verses seem to suggest a pre-existent world that was covered in evil darkness and which the Holy Spirit shook in judgment. I say all this because it appears, beginning in verse 3, that God is creating a new world which He calls Earth. But He already created it in verse 1, right? Read Genesis 1:1 and 1:2 again. This earth [lower case "e"] is declared a ruin, evil, and dark. God saw the Earth [capital "E"] in Genesis 1:9 and declared it "good". It wasn't good in 1:2! Death and wickedness existed there! They don't exist yet in 1:9 until Adam and Eve sin in the Garden. And they haven't even been created yet!

After hours and days and months of study and research, I believe that something devastating and evil happened to God's created earth between verse 1 and verse 2 in Genesis, Chapter 1. The earth came under judgment and God decided to re-create it beginning in verse 3. I do not think He destroyed the first earth. I think He just renewed it and restored it, just as He will at the end of the Millennial Age, as noted in Revelation 21. Think about it this way .... when we come to Christ in our Salvation experience, we are not destroyed. We become "a new creation"; remolded and reshaped into the original design God had planned for us. So, it is in the case of the earth in Genesis.

I don't know about you, but this account and understanding has so much depth and meaning that I find myself even more in awe of God Almighty. And wait until I take you on the next step of this journey where we will take a deeper look at what was set in motion in the Garden of Eden. You will see a bigger picture than a snake and an apple, and a bigger understanding of how it has affected all of history. You will be able to recognize the weight of what God shared with man and how that knowledge is still in play this very day. You will not hear the nightly news in the same way ever again! So be prepared for a huge wake-up call in the next post as more of the conflict between man and God comes into view.

Isaiah 65:17   For behold, I create new heavens and a new earth,
and the former things shall not be remembered or come into mind.