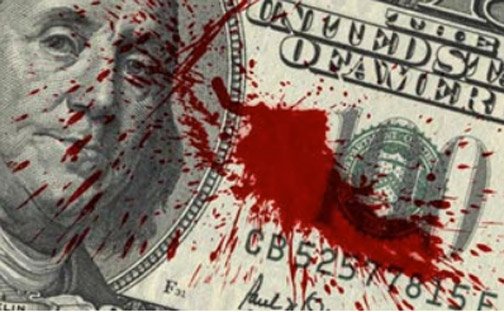 Today, I am going to embark on a very serious two-part article on what the Lord is showing me about the sins of this nation. I borrowed the title from an admonition that Pastor Dutch Sheets spoke to the Church as a whole. I advise everyone to listen to his 15-minute video on YouTube about the failure of the Church to adequately address the issue of abortion in our nation and its subsequent atrocities. Pastor Sheets counsel to the Body of Christ to "stop the singing and listen" came from an account by pro-life activist Penny Lea, who after giving a speech, was approached by an old man. Weeping, he told her the following story: "I lived in Germany during the Nazi holocaust. I considered myself a Christian. I attended church since I was a small boy. We had heard the stories of what was happening to the Jews, but like most people today in this country, we tried to distance ourselves from the reality of what was really taking place. What could anyone do to stop it?

A railroad track ran behind our small church, and each Sunday morning we would hear the whistle from a distance and then the clacking of the wheels moving over the track. We became disturbed when one Sunday we noticed cries coming from the train as it passed by. We grimly realized that the train was carrying Jews. They were like cattle in those cars! Week after week that train whistle would blow. We would dread to hear the sound of those old wheels because we knew that the Jews would begin to cry out to us as they passed our church. It was so terribly disturbing! We could do nothing to help these poor miserable people, yet their screams tormented us. We knew exactly at what time that whistle would blow, and we decided the only way to keep from being so disturbed by the cries was to start singing our hymns. By the time that train came rumbling past the church yard, we were singing at the top of our voices. If some of the screams reached our ears, we'd just sing a little louder until we could hear them no more. Years have passed and no one talks about it much anymore, but I still hear that train whistle in my sleep. I can still hear them crying out for help. God forgive all of us who called ourselves Christians, yet did nothing to intervene."

This is a two-part article because just as my spirit was moved by the revelations of the recent actions of our government [which I will mention shortly], the Lord began my morning by prompting me to read from the writings of the prophet Micah. I will admit that I was not familiar with this minor prophet, but as I read the seven short chapters in my Bible, the Holy Spirit began to pour into me that the messages he had for the princes and people of Jerusalem apply to us today. And not coincidentally, they speak to the consequences of the sin of abortion upon our culture. When Pastor Sheets calls for pastors, Christian leaders, [and I would add teachers] to no longer be silent; to wake up; and to do something, I agree with him. But I would go a step further, and warn them that they will be held accountable for ignoring this issue and their failure to defend these precious babies! We should be applying the warnings from the prophet Micah to our Sunday sermon!

I stopped counting after 60, of the number of posts I have written [since 2013] regarding the sin of abortion. And please understand, I bear no condemnation of those who have repented for this action in their lives. God has heard your heart and forgiven you. Do not walk in shame, but step forward in boldness to speak out against this evil practice. Become an expert on the actions of our government and corporations who seek to profit from an industry founded on the marketing of fetal body parts. Then use your voice to make known to everyone you can, the sickening truth of how this industry is operated, and those who are deeply invested in it. And sadly, our own federal government is in league with this abomination, and I find myself writing one more post in the hopes that it will inspire one more person to get involved in putting an end to this evil.

This week the website The Federalist" published an article revealing that Health and Human Services (HHS) Secretary Xavier Becerra, himself a radical pro-abortion activist, shut down the ethics board of the National Institute of Health (NIH). In essence, there is now no watch-dog to oversee future fetal research proposals or programs. They are free to do any kind of research they desire. According to the article, "In April, at President Joe Biden’s direction, HHS also reversed the Trump administration’s policy prohibiting funding for intramural research using human fetal tissue. The decision gave the “best and brightest” government researchers and agencies license to use the skin, brains, liver, and eyeballs of aborted children for taxpayer-funded research. In essence, the Biden administration is allowing for taxpayer-funded harvesting of aborted babies, and now it has abolished any sort of ethical oversight."

Now that we know that, how many of our churches have [and will] continue to sing louder to overcome the cries of the millions of unborn babies that have been tortured and murdered for profit? "For profit", you ask? You probably didn't know that did you? I refer you to another article by The Federalist, in which it is reported that the U.S. Food and Drug Administration (FDA) paid an estimated $2,000 per individual baby, at times adding up to $12,000 per box of harvested organs. It has been revealed during a U.S. Senate Judiciary Committee investigation that Advanced Bioscience Resources (ABR), a known purchaser of fetal tissue specimens, has paid $325 for the brain of a 20-week-old fetus; $650 for two eyes; and $325 each for a liver, thymus, and lung. And those estimates are low according to another source that says as much as $3340 has been paid for a brain, and $890 for upper and lower limbs with attached hands and feet. One of the most abhorrent logs in ABR's "Fees for Services Schedule" records the sale of a 21-week-old baby with Down Syndrome. This child’s limbs, organs, and skin were sold at hundreds of dollars apiece. ABR made $2,600 in total from the sale of this baby. I know this is gruesome and hard to read, but as long as we stay silent about the FDA's requests for "fresh babies"; late-term babies; skulls of second-trimester babies; and "boy organs to produce humanized mice", then we are complicit with these on-going abortion mills and so-called research laboratories.

This a truth that may be hard to swallow: There is a modern-day Holocaust that has been perpetrated against unborn babies in our nation. Since 1973, it is estimated that over 62 million babies have been murdered - over 10 times the number of Jews exterminated by Hitler in WW2. And now that there are no government-mandated ethical boundaries in place, "researchers" are free to do even worse barbaric experimentation against these innocent victims. As I have written so many times, the pastors in Germany were faced with a decision ... let the evil government of Germany be the authority over their consciences and morality? Or stand up for the holy righteousness and justice of God? One pastor, Deitrich Bonhoeffer, chose God's ordinances and laid down his life rather than stay silent. Will our pastors? Will you and I?  Or like the remorseless German man at the beginning of this article, will we continue to distance ourselves from the reality of what is happening because it is too disturbing and after all, we tell ourselves, what can we do? Will we just continue to sing our hymns louder to drown out the "noise" of those babies? Or will we stop and listen to the voices of those millions of children crying out for justice?

It is my prayer and hope that we are capable of standing up in our power and authority as representatives of the Kingdom of God on earth, declaring that the blood of Jesus is more powerful than the blood rituals being committed at a rate of nearly 1,400 sacrificed babies per day. Because I will tell you, as I reveal in the next post, that we should all be as burdened as the prophet Micah was in his day, of the abusive treatment of the poor and innocent by the rich and influential; by those who would use their social or political power for personal gain. But the message of Micah is even broader ... he exposes the sins of the nation of Israel, the punishment God is about to send, and the hope of restoration once the discipline is finished --- timely words of wisdom for us in our day and season of God's plan for mankind. So, I ask you to stop and pray right now that the voices of the faithful will be raised in prayer to not only repent for our inaction, but to seek God's guidance in waking up and educating the Body of Christ on this matter so we can put a stop to the wicked, vile, and evil practice of abortion. Our future as a nation depends on what we do, starting in this very moment ... I promise you that!

Micah 2:1     Woe (judgment is coming) to those who devise wickedness and plot evil on their beds! When morning comes, they practice evil because it is in the power of their hands.

Email ThisBlogThis!Share to TwitterShare to FacebookShare to Pinterest
Labels: Abortion, God's Judgment, Sins of our nation