Iniquity and Injustice: The Signs Of Our Time 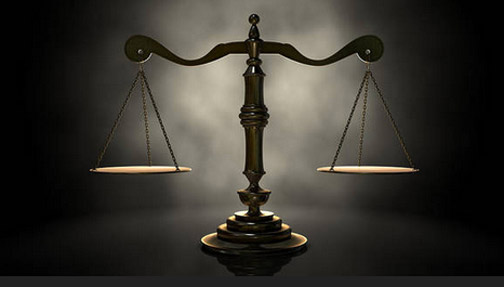 I know it's been a few days since I've written a blog post. To be honest, my spirit has been in turmoil and I've been trying to listen to what God wants to reveal to me for this time. As you may or may not know, my husband and I live near the Texas border with Mexico -- close enough that our daily lives have dramatically changed from what they looked like just a few years ago. And what I'm about to share does not come from a political bias. Rather, the turmoil I am experiencing in my spirit comes from trying to see the humanitarian crisis before me from a biblical and historical perspective, as well as from the viewpoint of my Father in Heaven.

Here's the source of my unrest ... I see so much injustice all around me; it is affecting people of different ethnic backgrounds, different nationalities, different histories ... and it is all being incited by forces of evil that don't care who they destroy in the process. There is the injustice of the immigrants who have traveled (many of them walking) for thousands of miles because their nation's social and economic structures have collapsed and they are simply hoping for a chance to survive and thrive in America. There is the injustice of thousands of women and children being exploited for slave labor and the sex trade within our nation. There is the injustice of people paying thousands of dollars [and some tens of thousands, depending on their nationality] to be illegally smuggled across our border. There is the injustice of a mother having both of her legs broken by the cartel as she fought to join her four children who were loaded on a raft to cross the Rio Grande. But because she had lost her wrist band which indicated she had paid the smuggler, she was left on the Mexico side of the river, screaming in physical and spiritual pain.

There are so many stories like that, and we have seen some of it on our nightly news. What we have seen far less of is the injustice suffered by peaceful residents of our Southern border states, whose cars are being stolen; who are finding dead bodies on their land; whose property is being destroyed -- houses broken into, fences mowed down, and ranches whose outbuildings are being taken over as "stash houses" as the smugglers move people from place to place. We are not adequately hearing about the over-worked law enforcement officers involved in high-speed chases and shootouts, or the overburdened Border Patrol officers taxed with the surge of over 2,000 immigrants per day [per county] in sparsely populated areas. It's an insurmountable problem!

But like I said, I'm trying to wrap my brain and my heart and my spirit around the consequences of all this turmoil and danger and chaos. Does history have anything to say about similar periods of national upheaval? What does God think about it, and what role will He play in the near future? Believe me, I can see the iniquity of past generations coming to bear. I am not naive as I look upon this nation's need to repent for how it has treated indigenous peoples. I know that only a couple of hundred years ago, at the end of the Mexican-American War in 1848, the United States, as victor, took possession of land that makes up all or part of Texas, New Mexico, Arizona, California, Nevada, Colorado, Utah and Wyoming. But before that, Mexico fought a revolutionary civil war to gain their independence from Spain, who had previously conquered the Aztec empire to reign over this disputed land. There is enough blood in the ground from all those wars and generations of fighting over the land.

And I know that has been the way of the world ever since God set the boundaries of the nations after the Tower of Babel [when He took Israel as His spiritual territory, and left the rest of the earth in the possession of the lesser gods]. There have been wars over land, and nation has conquered nation. Boundaries and names of nations have changed throughout the centuries, and injustice has ruled the earth. And the rise and fall of nations and empires has resulted in generational iniquity. Wickedness has entered in the bloodlines of people through war and murder and evil wrought under the demonic influence of men [and women] who have sought to profit from the misfortune of others. Our nation is not immune from such human iniquity.

Yet, now I see that injustice is falling on Godly and righteous people, who through no fault of their own, find themselves in the middle of unjust policies and an invasion of the poor and disadvantaged who are being used by governments and illegal organizations to serve their own interests. Are we seeing the beginning of the collapse of our nation? Combine what we are experiencing along our southern border with our mounting national debt and the instability of our place in the global economy, and it is certainly conceivable that we cannot sustain the current crisis. We know by looking at history, that such collapses can take a century, perhaps decades, or happen overnight; coming like a thief in the night.

Wait! Doesn't the Bible have something to say about that? Now as to the times and dates, brothers and sisters, you have no need for anything to be written to you. 2 For you yourselves know perfectly well that the day of the [return of the] Lord is coming just as a thief [comes unexpectedly and suddenly] in the night. 3 While they are saying, “Peace and safety [all is well and secure!]” then [in a moment unforeseen] destruction will come upon them suddenly like labor pains on a woman with child, and they will absolutely not escape [for there will be no way to escape the judgment of the Lord] -- 1 Thessalonians 5:1-3.

I've seen it in my lifetime! The Soviet Union, under Mikhail Gorbachev fell apart in less than five years. Do you remember how close the world came to complete economic meltdown in September 2008? I don't think any of us know just how desperate that situation was -- and our economic system still hasn't recovered! But there is one thing we all need to stay focused on ... the rise and decline of nations throughout history all have the hand of God upon them. Daniel, that great prophet of the Bible, who had favor and compassion from God, proclaimed that "It is He who changes the times and the seasons; He removes kings and establishes kings" (Daniel 2:21). It is evident that God determines the ways in which a nation progresses and develops. If a nation and its leaders stray from the precepts of God's counsel, then history will see them exit the stage according to His will.

The Bible gives us an example of this when Daniel interprets the handwriting on the wall at King Belshazzar's feast: God has numbered the days of your kingdom and put an end to it; —you have been weighed on the scales [of righteousness] and found wanting [deficient]. That very night, Belshazzar's kingdom fell to the Medes and Persians. It happened suddenly -- like "a thief in the night". Do you think the nations are found "wanting" today? What about the nations in Venezuela, Brazil and Central America whose governments have created such a surge of poor and desperate people to our borders? What about the nation of Mexico who has surrendered to violent organizations who extort its own people to benefit their trafficking and drug trade? What about our own beloved nation? What does God think of us as the Number One destination of trafficked and enslaved people? Aren't we due His wrath and judgment for failure to acknowledge Him as we continue to idolize wealth, power, sexual perversion and abortion?

The injustice we have perpetuated through generations of iniquity will not be ignored by our Righteous and Just God. I know it must grieve His heart that we have fallen far from His ways. There is very little to connect us to our Biblical founding, except for the remnant who is faithful to exalt the Lord of Heaven and left the name of the Most High God above all other names. This remnant refuses to honor and worship the gods of gold and silver, or to bow down to the gods of greed and human power and influence.

Last weekend, a small group of our Ekklesia spent the day traveling our surrounding counties, praying for redemption of the land and the blood that is crying out from all the wars and injustice through the centuries -- from the human sacrifices to the Meso-American gods of Kul Kul Kan, Vera Cocha, Ah Puch and Quetzacoatl; from the blood shed in the Texas Revolution to win independence from Mexico; and from iniquity of the drug and sex trade that travels through our state to the rest of the world. But I also know that we need to repent for the blood our ancestors shed in conquering the indigenous peoples who came before us; and for being the state that led abortion to become the law of the land. There is so much to repent for before our Righteous and Holy God! Forgive us, Father! We declare that we will continue to magnify You as our God who gave us Life from the breath of your Spirit. Will you join me in fervent prayer that the hand of Almighty God will turn the hearts and plans of this nation's leaders back to Him, that it might be said of us, "Blessed is the nation whose God is the Lord, the people whom He has chosen as His heritage!" (Psalm 33:12).