The Power of Jesus's Outstretched Arm 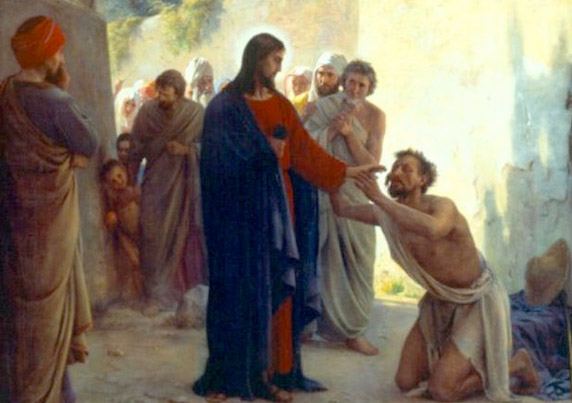 I'm inviting you along for the ride as the Lord schools me on a bigger picture of His redeeming power. I'm not sure what the Holy Spirit is going to reveal during my "thinking out loud in the spirit". But, as I write this post, it is my prayer that His revelation will be a blessing to us all.

I'm in the middle of reading a really interesting book, titled Redeeming Your Timeline, by Pastor Troy Brewer of OpenDoor Church in Burleson, Texas. He presents an interesting concept of Jesus as a Time Traveler, being able to move in and out of the timelines of our lives, healing us in the past, the present, and the future. This book intrigued me because it fits so nicely with what I have experienced with the Lord in the Inner Healing and Deliverance ministry He has brought Mark and I. It has been my privilege to witness Jesus appearing in the memories of a person's wounded past to liberate them from the spirits of shame, guilt, unworthiness, etc, and then speaking to them [in the present] of their new identity as a valuable [and much loved] child of God. It's always a beautiful picture of what "being supernaturally redeemed" looks like.

Pastor Brewer takes this idea of supernatural redemption a little further, explaining that Jesus can not only heal our past wounds, but can relieve our fears about the future, and help us to remain calm in the present. In fact, when He delivers us from the captivity of our past, it actually changes our now and our future! Our entire timeline can be redeemed!

Before I go any further, I think we need to come to a mutual understanding of what "redeemed" or "redemption" actually means. I know, for myself, that I have sometimes been confused about the significance of such Scriptural words because they were never fully explained to me. So, I want to make sure we are all on the same page. I would venture to say that most Christians think of redemption as a New Testament concept; that it exemplifies Jesus's sacrificial death on the Cross. And it certainly does point to the fact that Jesus brings us deliverance from the guilt and power of sin through His death. But when researching deeper and accurate meanings of the words "redeem" or "redemption" in Strong's Concordance, I found that those words actually appeared far more often in the Old Testament! And the meanings have so much relevance for us today!

These are the meanings assigned to the words redeem, redeemed, Redeemer: 1) deliverance from captivity; 2) preserving the integrity, life, property, and family name of a close relative; and 3) complete sovereign freedom to liberate human beings. And we see these understandings in passages like Exodus 6:6, which says, "Therefore, say to the children of Israel, ‘I am the Lord, and I will bring you out from under the burdens of the Egyptians, and I will free you from their bondage. I will redeem and rescue you with an outstretched (vigorous, powerful) arm and with great acts of judgment [against Egypt]". Then there is Psalm 77:15, which reads, "You have with Your [great] arm redeemed Your people, the sons of Jacob and Joseph".  This concept of Jesus as redeeming with an outstretched arm will broaden our understanding of how He heals in the timelines of our lives.

But first, I want to point out Job, which is considered by many theologians to be the oldest book in the Bible. Job is quoted as saying, "For I know that my Redeemer and Vindicator lives, and at the last He will take His stand upon the earth" (Job 19:25). That is a picture of Jesus being in the past, thousands of years before He was actually born, as well as a prophesy about what He will do in a future we haven't experienced yet! In Isaiah 48:17, Jesus speaks to the prophet Isaiah, identifying Himself as "your Redeemer, the Holy One of Israel". And in Isaiah 48:12 Jesus calls Himself "the First and the Last", which coincides with His identity as "the Alpha and Omega" in Revelation 1:8. So, here we once again see Jesus in the past and the future. The point I want to get across is this: Scripture tells us Jesus is the One who is, who was, and who is to come. But we must not see that truth through an impersonal lens, as if it is a nice theological concept, but somewhat distant in relevance to our own lives. On the contrary, Jesus can actually enter into the timelines of our lives -- past, present, and future -- and redeem them. And here is what is even more amazing ... when Jesus heals that wound in your past, it is actually re-written in your Book of life, which creates a new present and a new future!

Take for example, the man with leprosy that Jesus healed in Mark 1:40-45. Scripture says, Moved with compassion [for his suffering], Jesus reached out with His hand and touched him, and said to him, “I am willing; be cleansed.” Once again, there is that act of reaching out His hand in power.  In the Greek, that act is the word "ekkteino".  Ek means "coming out of place, time, or cause". Kteino means "to put to death". So, we can understand that, in the power that was in Him, Jesus entered into the timeline of the man with leprosy [to the place, time, and cause of his disease] and healed him [put to death what the Enemy had sent against him]. In effect, that changed the man's identity, which transformed his life in the present, and into his future.

And guess what? He can do the same for me and you! He can actually redeem us through His outstretched arm [just as He did for the Israelites in the aforementioned passages in Exodus and Psalms]. He can travel through the times of our lives [past, present, and future] and free us from the effects of sin, transgression, and iniquity; and in the process, give us a new destiny, transforming our lives to reconcile with what He wrote in our Book of Life before He even created the world! The question becomes if we will allow Him to do that. Can we see how inviting Him into our past can profoundly change our present and lead us into a glorious future? We must understand that Jesus created Time, so it is an environment that He has sovereignty over, and He can change what happens there. He has the power to confront our past and redeem it; delivering us from the captivity and bondage of sin, preserving our integrity and who He designed us to be, and propelling us into a future that glorifies Him and His Kingdom! That portion of time that contained the sin has been cleansed and a new portion of time has been established. And we can operate in this new timeline knowing our Lord, our Redeemer, has sanctified us to walk out our purpose. No looking back -- let Him stretch out His powerful arm and receive your redemption!

Isaiah 46:10     Declaring the end and the result from the beginning, And from ancient times the things which have not [yet] been done, Saying, ‘My purpose will be established, And I will do all that pleases Me and fulfills My purpose,’