The Hope Of The World! 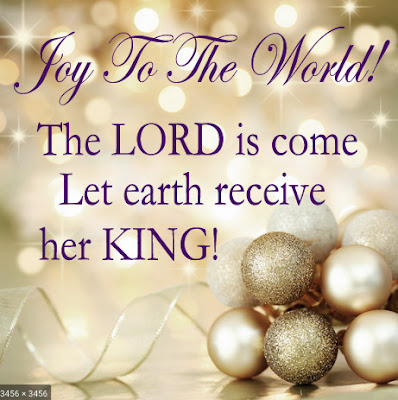 I know that for many, this Christmas Day is the bleakest they've known in their lives. The world has been overwhelmed by a virus whose origin and basis is not universally accepted, yet nearly everyone has been devastated by its impact. The tendrils of its consequences have caused discord and disagreement across political, social, medical and familial lines. People have died; jobs have been lost; we have been forced to isolate; and it has invaded and annihilated the electoral process of our government. We don't even see each other's smiles anymore.

Yet, this is still the day we celebrate the birth of the Savior of the world's! Whether it represents the accurate birth date of Jesus or not doesn't really matter to me this year. Instead, I am concentrating on the importance of the message our Father in Heaven wants us to receive. Yes, it may personally look bleak for us, and our nation is suffering an identity crisis, but this is not the first time in history that people and nations have looked at their reality and discovered it to be hostile and forbidding. In fact, our situation in America looks similar to what it did on the night Jesus was born.

An article originally published in 2010 and written by J.C. Ryle for christianity.com reminds us of the Bible prophecy in Genesis 49:10 that says, "the scepter [of royalty] shall not depart from Judah, nor the ruler's staff from between his feet, until He comes to whom it belongs; and to Him shall be the obedience of the peoples". According to Luke 2:1-7, "a decree went out from Caesar Augustus that all the world should be registered [for the purpose of taxation]". This occurrence is not unlike this year, when a census was taken, in order to determine the number of inhabitants and property in order that our government could consider their demand of taxes upon the citizenry. We have read this account many times during our Bible readings on Christmas morning. But this simple statement is heavy with significance.

As Genesis 49:10 implies, the scepter of power was departing from Judah. The Roman Empire was exerting its authority over the world, and now this foreign power was seeking to dominate the land of Judah through heavy taxation. Strangers, who did not understand Judah's history or their ethos, were beginning to rule over them. Their independent government was quickly vanishing, and this "super power" threatened to overcome the world.

At this time of Jesus's birth, all the previous empires had proven the foolishness of the world. None of the religious leaders, kings, poets, or philosophers of Egypt, Assyria, Babylon, Persia, Greece, or now, Rome, had proven that through their worldly wisdom, they knew who God was. All of them were filled with the world's dark idolatry. Rome was no different. Gloom, misery, despair and a growing disdain among the people for oppressive government marked the era. In addition, the land of Judah was fracturing from within. The Pharisees, the Sadducees, the Essenes, and the Zealots all sought for control of the people's hearts. Conflict, riots and rising tension typified the year Jesus was born. Sounds familiar, doesn't it?

But God's timing was perfect! Into this maelstrom of darkness, He saw the weakness of His people, and determined that the world was ready to receive its Savior. Romans 5:6 says, "For when the time was right, the Anointed One came and died to demonstrate his love for sinners who were entirely helpless, weak, and powerless to save themselves." Isn't that how many of us are feeling today? Our worldly wisdom tells us that we are helpless, weak, and powerless to push back against a pandemic that has hijacked our health, our economy, and our freedoms. It has even managed to commandeer our government and threatens to destroy our rule of law and our republic!

But we must not look upon our circumstances through worldly wisdom, which would convince us that we are doomed and defeated. God is sovereign over the world and our history as a nation. He holds the final outcome in His hands. Yes, Satan seeks to destroy us because we have represented the freedom that He designed mankind to experience. But Satan does not have the mind or the wisdom of God. And neither do we. Are we in a time of testing? Are we being disciplined for abandoning God and losing sight of His moral laws? Perhaps. But we must not attempt to second-guess Him. We must not be anxious about the course of events around us. Instead, we must declare that on this day, two thousand and twenty years ago, the earth received her true King! God sent His Light into the Darkness and that Light still rules and reigns! He still demonstrates His love!

Yes, our reality is very similar to the reality of that royal birth two millennia ago. But we must see the bigger picture.... into the midst of the oppressive Roman Empire, God knew when it was time to intercede from Heaven and send His Son as Savior. God knew the exact time for Christ to be born to rescue the world. And He knows the exact time to step into our national history. We must trust Him for that timing, and we must continue to live in divinely inspired expectation of protection. Until that moment, let us rejoice on this day [and always] that He chooses to be present in our circumstances; that He has the power to intervene in our affairs; and that the birth of Jesus Christ, the Messiah, represents our hope for deliverance and victory. I wish you and your family a very Merry Christmas filled with the joy and the Good News that the Lord is come. And let all of earth receive Her King!

Luke 2:14     Glory to God in the highest realms of heaven! For there is peace and a good hope given to the sons of men.