I cannot take credit for the premise of this post. The beautiful interpretation of Charles Schultz's beloved A Charlie Brown Christmas comes from the pen of Jason Soroski, a pastor, writer and musician. He originally wrote a piece in 2015, titled "Just Drop the Blanket: The Moment You Never Noticed in A Charlie Brown Christmas", and a subsequent article entitled, "Drop the Blanket 2: The Rest of Linus's Story". I will include links to them both at the end of this post.
But the reason I wanted to share this excellent presentation on the days leading up to Christmas is that I love the simplicity of what Charles Schulz was communicating, and how Jason makes it so meaningful. And I have a couple of thoughts of my own to add to the analysis.
Here's the backstory: As a devoted Christian, Charles Schulz did not shy away from exhibiting his faith through the messages of his comic strips, and A Charlie Brown Christmas was the perfect vehicle to make a statement about the condition of faith within the confines of postmodern religion [which characterizes religious truth as highly individualistic, subjective, and residing within the individual]. A Charlie Brown Christmas was first produced in 1965, a mere three years after the Supreme Court decision that removed prayer from America's public school system. I also believe that the commercialism of Christmas, which Charlie Brown openly laments in the cartoon special, becomes embedded in the American psyche during this time period. 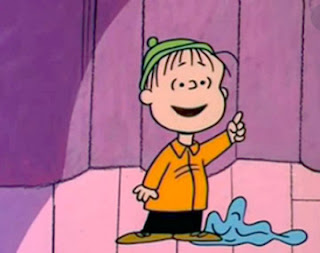 Charlie Brown finds himself the director of the school Christmas pageant, but becomes disheartened by his efforts to find significance in the holiday. He finally confides in Linus and shouts, "Isn't there anyone who knows what Christmas is all about?" Linus tells him, "Sure, Charlie Brown, I can tell you what Christmas is all about" and proceeds to center stage, his security blanket in tow and asks for the lights to be dimmed. As he stands in the spotlight he begins to recite the Christmas story from Luke 2:8-14, the King James version.
But as Jason Soroski points out, there comes a climatic moment in Linus's recitation when he drops the blanket! Mind you, the whole cast of Charlie Brown -- from Lucy to Snoopy to Sally to Peppermint Patty -- have tried to wrestle Linus's blanket from him. Why is it so significant that he drops the blanket on his own? It comes at the exact moment he recites the command from the angel of the heavenly host, "Fear not"! Pastor Soroski proposes that this was very intentional on the part of Charles Schulz, and he suggests the following: Charles Schulz was proclaiming the truth of Scripture which says "the birth of Jesus separates us from our fears; the birth of Jesus frees us from the habits we are unable (or unwilling) to break ourselves; and the birth of Jesus allows us to simply drop the false security we have been grasping so tightly, and learn to trust and cling to Him instead."
I love this image! And I totally agree! Our only insecurity in this increasingly frightening world is Jesus Christ, our Savior. And this simple testimony from Linus reminds us to seek our safety and freedom [from fear] and our peace in Jesus. This is the message of our Inner Healing Ministry, as well. But as I noticed, and as Jason Soroski points out, as Linus leaves the stage he picks his blanket back up and sticks his thumb in his mouth. Why would he do that?
This is where my experience in our Inner Healing Ministry comes into play. We are often able to help a Beloved see the spirit of fear [or other tormenting spirits from the Enemy] that has invaded their life, and help them work with Jesus to eradicate it from their life when they declare it must bow to the authority of King Jesus. They walk in this scriptural truth and leave confident in their power and authority to defeat the Enemy's tactics. But just like Linus, who boldly threw aside the false security of that blanket, we pick it up again in a moment of weakness when we believe the old lie from the Enemy that perhaps Jesus has not fully dispelled the spirit of fear; that we have some reason to fear. 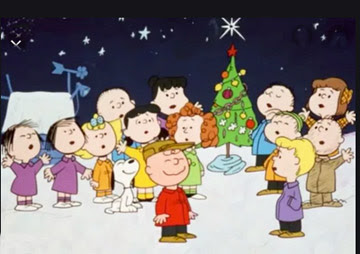 But Charles Schulz doesn't short-change the truth of Christ. Throughout the Christmas special, much of the focus has been on the scraggly little Christmas tree that Charlie Brown chose as a protest against the commercialization of Christmas. But Schulz changes the focus from the tree to the true [and bigger] focus of Jesus. That little tree, which has spent the entire program bent over and losing its needles, comes to life when Linus declares that "Maybe it just needs a little love". He finally parts with his blanket and lovingly wraps it at the base of the forlorn tree as the gang breaks into the Christmas carol, Hark the herald angels sing, glory to the Newborn King. Suddenly that tree is transformed and ends the show beautifully clothed in splendor.
I will tell you that I have witnessed the Risen Christ do the same for many people who see themselves as failures. As they experience their inner healing and hear Him tell them that He loves them, they hear that they are beautiful, worthy, and competent/able to defeat the devil. Just as Linus wrapped that hurting tree in his blanket and adorned it with decorations, I have seen Jesus wrap men and women in royal robes of righteousness and place a crown on their head. They are immediately and divinely transformed into who they were meant to be!
As Jason Soroski suggests, perhaps Charles Schulz used Linus's gesture of wrapping the blanket at the base of the tree to represent laying down his fear at the foot of the cross. I will tell you that Jesus has shown me, and countless others, that He wants us to lay our hurts and wounds at His feet for Him to take care of. When we see and hear the truth from our Savior who we are meant to be, we surrender our efforts in the flesh, and become joined to Him in the Spirit. We are undefeatable!
It has been over 50 years since A Charlie Brown Christmas came into our living rooms as a Christmas TV special. But we need it's simple message more than ever. Like Charlie Brown, I deplore the commercialization of Christmas, and go even further to renounce its pagan roots. But the beloved program's message of our security and freedom in Christ surmounts what the world has done to try to silence the voices of the multitude of the heavenly host as they sang their praises, "Glory to God in the highest, and on earth peace, good will toward men." And, thank you, Charlie Brown and Linus for showing us the true meaning of Christmas!

Here are the links to both articles by Jason Soroski: Click here and here. And have a Merry Christmas!


Luke 2:30-32    With my own eyes I have seen Your Word, the Savior You sent into the world. He will be glory for Your people Israel, and the Revelation Light for all people everywhere!