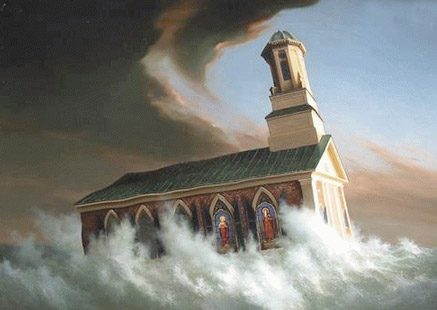 If any of you have been following this blog for any length of time, then you know that I struggle with what we call "The Church". And please know that I am not painting a broad brush across all churches or church-goers. But if we can honestly look at our culture and the state of our families and say that the Church has done a good job, then we are misleading ourselves. And many times I am perceived as misleading, at best -- and heretical, at worst -- when I express my opinion that our modern versions of the Bible have mistranslated the original concept of Jesus's "called out ones" to convince us that our models of a body of Christians who meet in a building, hire a minister to preach to them, and support the organization with their tithes is what Jesus said when He proclaimed, "Upon this rock, I will build My Church." He actually used the word Ecclesia, which comes from the Greek words ECC, meaning "out", and KALEO, meaning "to call".
When the original writers of the New Testament wrote the Books of the Bible, they used the word Ekklesia, not the word, Church, [which comes from the Greek word, Kuriakos, meaning "pertains to, or belongs to, a lord"]. So, why would they choose to use the word Ekklesia to refer to a Christian body of people? Remember, Ekklesia means "called out ones", and what would these Christians have been called out from?
Consider Acts 17:1-9. Paul and Silas were in Thessalonica, speaking in a synagogue about the lordship and kingship of Jesus. Apparently they were causing quit an uproar among the citizens and a mob approached the home of a man named Jason, where they suspected Paul and Silas were staying. But listen to how they describe Paul and his companion: “These men who have turned the world upside down have come here also, and Jason has received them, and they are all acting against the decrees of Caesar, saying that there is another king, Jesus.”
What did they mean that Paul and Silas were "turning the world upside down"? They were turning the WORLD SYSTEM upside down! In ancient Rome, the Caesars were king and oftentimes deified upon their deaths. But here comes Paul saying that they should owe their allegiance to the resurrected Jesus, who was a greater King than King Caesar, and whose kingdom was not of this world! They were dethroning human kings and calling out groups of believers to stand in opposition to the worldly systems of their day, and to act as representatives of their Heavenly king. Paul wasn't a  "church builder" as we so often hear him declared. He was a "kingdom builder", teaching the principles of God's heavenly government -- in opposition to the civil government of Caesar. Paul and Silas were extending Jehovah God's call to whoever would receive it and obey. Those whose hearts responded to the call became citizens of King Jesus's (the Messiah) kingdom and joined themselves to the Ekklesia; the community of believers who walked in Heaven's system of government, not the world's.
Let's go to the next step -- it is important to understand that these bodies of believers were independent civil bodies of Christians. They saw themselves as independent from kings and governing officials and ruled by God's system of government through the Holy Spirit. They shood for independent self-government under the authority of God, Himself, and guided by His anointed leaders. Does that sound like anything the majority of our "Churches" represent today?
It seems to me that instead of being in opposition to the world system, they have become enslaved to it. Our churches have become religious organizations attached to their 501(c)(3) designations. Instead of the Ekklesia of the Book of Acts, who stood in opposition to the world system, our churches too often look just like [or promote] the systems of the world.
I want to summarize this notion that as the Body of Christ, we have a misplaced identity, and are incorrectly positioned. Jesus said He would build His EKKLESIA! It's becoming urgent and critical that we step into that role! Opposition to the world's system, its form of government, and its rulers was the message Paul and Silas carried on their travels. And I would like to quote from a sermon by Catherine Booth, known as "the Mother of the Salvation Army", but who also championed women's rights to preach the Gospel. She wrote, "Opposition! It is a bad sign for the Christianity of this day that it provides so little opposition. If there were no other evidence of it being wrong, I should know [it] by that. When the church and the world can jog along together comfortably, you may be sure there is something wrong. The world has not altered. Its spirit is exactly the same as it ever was, and if Christians were equally faithful and devoted to the Lord, and separated from the world, living so that their lives were a reproof to all ungodliness, the world would hate them as much as it ever did. It is the church that has altered, not the world". She died nearly 130 years ago. Think how far down the rabbit hole to "little opposition" we've come.
The Bible is clear -- Paul and Silas turned the world systems upside down and proclaimed a new kingdom; the Kingdom of God. I invite you to answer their ancient invitation to become a "called out one". It's okay to come together as an independent body of believers, ruled by the Holy Spirit to overthrow the world systems of abortion, gay marriage, sex trafficking, pornography, adultery, pharmakea, and all anti-Christ spirits. And in doing so, it is crucial that we carry forth our King's message of love, service, and sacrifice. But be prepared to be hated, just as Jesus said we would. In the final analysis, I'd rather be hated as the true Ekklesia, than loved as the compromising Church.

Revelation 3:14-22      Then write this to the angel of the Ekklesia in Laodicea: ‘These are the words of the Amen, the faithful and true witness, the beginning of God’s creation ...  you have no eyes to see that you are wretched, pitiable, poverty-stricken, blind and naked ... All those whom I love I correct and discipline. Therefore, shake off your complacency and repent...

Email ThisBlogThis!Share to TwitterShare to FacebookShare to Pinterest
Labels: The Church, The Ekklesia