Have You Given Christ What He Died For?

I ask that question because I am always astounded at the power of forgiveness whenever Mark and I meet with someone for Inner Healing. It's the first thing we do when they come to the table that Jesus has set for them in our home. And the same thing always happens ... they tell us that they have already forgiven everyone in their life. But we explain to them that we've been given a way for them to express forgiveness that takes unforgiveness off the table as a weapon for the Enemy.
It works like this -- it is important that we speak our forgiveness out loud because when we do it silently in our mind [with Jesus or the Father], it is done in secret and remains hidden from the very spirits that are tormenting us with our unforgiveness. We need to realize that forgiveness is an act that we must do. God or Jesus cannot do it for us. So, when we speak out loud WHO we're forgiving, and WHY, and then HOW IT MADE US FEEL, before releasing them to the Father in the Name of Jesus, we are working in spiritual mechanics to establish a record in the spiritual realm that can be attested to in the Courts of Heaven.
You see, the devil is a liar and he comes only to kill, steal and destroy. He knows that our Father in Heaven is a legalist; He has established "laws" for us to live by [according to His righteous government in Heaven] and Jesus, when He went to the Cross, paid every legal requirement for us to be reconciled back to the Father. The devil knows what Jesus meant when He said, in Matthew 6:14-15, "For if you forgive others their trespasses, your heavenly Father will also forgive you, but if you do not forgive others their trespasses, neither will your Father forgive your trespasses." Forgiveness of others is a legal requirement of Heaven if we are to expect forgiveness for ourselves. That's why Mark and I take it very seriously when we come to Jesus's table to assist Him in setting free those who are in bondage to the devil. 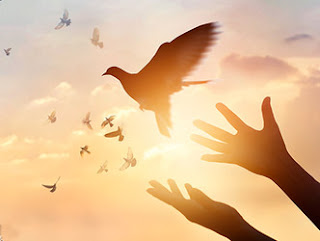 So, when we're told, "Oh, I've already forgiven everyone", we gently encourage them to just do it one more time, using the method we described above. And it happens every time -- they realize that the forgiveness they thought they had extended to those who have hurt them didn't complete the process. Very often tears are shed as the fullness of the wound that led to the unforgiveness is exposed, perhaps for the first time. And when they are able to reveal all the ways that they were hurt and how it made them feel, and then see themselves releasing that person to Jesus to tend to, they are finally free of all the residual pain that surrounded the unforgiveness they were still carrying.
And then we explain that this is a spiritual exercise that will most likely need to be repeated in the future. We explain that for the last 20 or 30 or 40 years, the devil has reminded them of that hurt and pain whenever he was able to bring that person to their mind. But now they know how to defeat that plan to steal and destroy their peace and joy. And they shouldn't be surprised the Enemy tries the same tactics again; it's worked so many times in the past. Plus they need to remember what the Lord tells Peter in Matthew 18:20-22 ... Peter asks Him, “How many times do I have to forgive my fellow believer who keeps offending me? Seven times?” Jesus answered, "Not seven times, Peter, but seventy times seven!!" That offense can keep happening even if the person is not present by the Enemy simply whispering their name or reminding you of what they did.
I love how the writer of Hebrews, in Chapter Nine, ties all this together; how it helps us to understand that if we are unable to forgive, we are essentially denying Christ one of the most important consequences of going to the Cross. The writer carefully explains that under the Old Covenant, the shedding of blood was necessary to purify everything -- the people, the tent, even the vessels used for worship. He says, "Indeed, under the law almost everything is purified with blood, and without the shedding of blood there is no forgiveness of sins."  Can you see why Jesus's blood had to be shed on the Cross for us to be forgiven?

He goes on to explain that the blood sacrifices instituted by Moses were a copy of the sacrifice in Heaven, which was a better model. The writer says, "For Christ has entered, not into holy places made with hands, which are copies of the true things, but into heaven itself, now to appear in the presence of God on our behalf.  Nor was it to offer Himself repeatedly, as the high priest enters the holy places every year with blood not his own, for then He would have had to suffer repeatedly since the foundation of the world. But as it is, He has appeared once for all at the end of the ages to put away sin by the sacrifice of Himself."
So, can you see that when we think we've forgiven someone, but the Enemy is still able to stir up old feelings of pain at just the thought of that person, we are in essence, asking Christ to be crucified again in order for us to be forgiven of our unforgiveness? Christ wants to take that pain and unforgiveness away once for all, and deny the devil one of his most potent weapons for keeping us in bondage. And I can personally attest to the fact that Jesus has often asked me to give Him what He died for. It's a sober reminder that my unforgiveness is not for me to harbor or accommodate. He paid a great price -- He shed His precious blood, as required, so that I could receive forgiveness for my own sins. How can I even think of hanging on to unforgiveness against another? Take it from me, and all those who have received the peace of Christ at our table, when you are able to release that pain of unforgiveness to Jesus, a weight is lifted and you experience freedom from the chains that have bound you. We praise You, Lord Jesus! You give us life, and give it abundantly!

Ephesians 1:7    "In Him we have redemption through His blood, the forgiveness of our trespasses, according to the riches of His grace."
Posted by Pam Kohler at 6:30 AM

Email ThisBlogThis!Share to TwitterShare to FacebookShare to Pinterest
Labels: Forgiveness