We've Been Given The Keys of the Kingdom of God -- What Now?

In the last couple of posts I have zeroed in on expanding our understanding of the Kingdom of God. This may be a new concept for some, and for others, you might be aware that Jesus commanded us to "seek the Kingdom first", but are not quite sure what that looks like.
I can remember when I concentrated on studying the Book of Matthew, which I found full of the revelation that Jesus is King of a heavenly kingdom realm that was being established on earth with His birth. With that divine disclosure to the human world, it makes "Thy Kingdom come, Thy will be done, on earth as it is in heaven" a much more powerful statement.
I cannot go forward without addressing the difference of opinion as to whether the Kingdom of God on earth is a future event [at the return of Christ] or whether it is present today. I can only share what my spirit is telling me, and each of you have to study the Word and come to your own theological understanding. 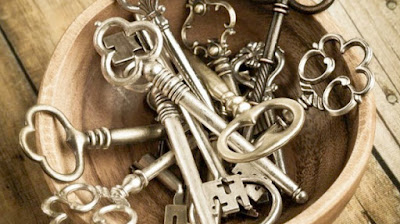 Luke 17:21      "The Kingdom is not discovered in one place or another, for God’s Kingdom realm is already expanding within some of you."
Posted by Pam Kohler at 6:30 AM

Email ThisBlogThis!Share to TwitterShare to FacebookShare to Pinterest
Labels: Keys of the Kingdom, The Kingdom of God