The Momo Challenge: Real, Spiritual, Or A Hoax? 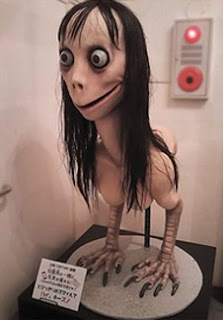 I don't know if you have heard of the "Momo Challenge", but since it has affected my family, I feel compelled to address the subject. I have done a fair amount of research on this latest social media phenomenon, and here is what I've been able to determine ... ‘Momo’ is a social media account on popular children's platforms that uses an image of a doll with monstrous features, large eyes and a wide mouth to induce curiosity among children. The artwork called Mother Bird by Link Factory is inspired by the work of a Japanese artist Midori Hayashi, who has no association with the challenge, according to officials.
Here's how the "Momo Challenge" works ... In the middle of a popular children's website or game, an image will pop up of this gruesome figure, meant to entice children to click on it, with messages like "I wanna play with you". Once the child makes that connection they are subjected to gruesome and horrifying images; sometimes messages to commit suicide; and threats that their parents will be killed if they do not comply. Apparently Whatsapp is a common app vehicle for this viral hack, and platforms such as the You Tube Kids app, various Disney apps, and even the popular Peppa Pig app have fallen prey to this hack.
As with every internet story that spreads like wildfire, you will find those who are quick to dismiss it as a hoax. For instance, Wikipedia posted this: "The "Momo Challenge" is a hoax and urban legend about a nonexistent social media challenge that was spread on Facebook and other media outlets. It was reported that children and adolescents were being enticed by a user named Momo to perform a series of dangerous tasks including violent attacks and suicide." Wikipedia goes on to substantiate so-called "web security experts" (who are never named) that state it is more "likely a case of moral panic; a hoax fueled by parents’ fears in wanting to know what their kids are up to. There’s an inherent fear in what young people are doing with technology."  Yet, other experts willingly admit that 75 to 80 percent of these free apps offer no security and are subject to hacks.
Of course this smacks of normalcy bias to me among parents and "experts" who don't want to believe it.  It's simpler to explain it away as a fake news story targeting parents who feel guilty about letting technology babysit their kids. But I'm hear to tell you that it should not be so easily ignored.  My brother's 6-year-old granddaughter was suffering from nightmares and panic attacks for over a week, before they were able to track down this unusual pattern in her behavior. She finally cried to her grandmother that "Momo scared me". Further investigation revealed that her Candy Crush app had been hacked with the "Momo Challenge". And her 12-year-old sister was well aware of the hack, had seen it, but wasn't susceptible to it's sick influence.
And I will say this .... yes, the image existed before the app hack, and it comes from a real sculpture by a real artist. But that doesn't negate the possibility that the challenge exists, or that it is a hoax or a fake. What kind of perverted mind thinks of creating a "challenge" that is so traumatizing and emotionally disturbing to young children? Whether the "challenge" is real or a fake, the result is the same ... it is devastatingly real to children and spiritually damaging. I can't tell you how effective a spirit of Fear can become in a person's life, when instilled at such a young age.
In our ministry, my husband and I often encounter a spirit of Fear that entered a person during their childhood and as a result of a nightmare. Our sleep is meant to be sweet and free from fear. The Bible says "You will sleep like a baby, safe and sound—your rest will be sweet and secure" (Proverbs 3:24).  Yet children are not exempt from demonic attacks in their sleep, and it is important to make sure that spiritual doors have not been opened or permission given to a spirit to operate. Something like this image of a Japanese sculpture, which has been demonized and delivered with an evil message, can suddenly appear, unprompted, on your child's tablet. And unless addressed immediately with a renunciation and assertion of Jesus's saving blood and protection, it can become a foothold for the Enemy in a child's life.
I know that those who find their security in the secular world, and for whom the internet is a benign realm, will scoff at my warning. But, in our ministry, I have multiple testimonies of adults who bear witness to demonic appearances in their dreams as children; and these evil intruders progressed from footholds to strongholds, resulting in adults still in bondage to the spirit of Fear. So, please take this post seriously. Speak to your children and grandchildren, encouraging them to come to you should they ever encounter this devilish character in the middle of Candy Crush or Peppa Pig. Counter the Enemy's attacks on our children with the loving message of Christ as their Protector. Teach them how to put on their spiritual armor and wash away that evil image with Living Water. Technology and the internet are a breeding ground for the spiritually dark. But we have the Spirit of the Lord resting on us. Let's take advantage of His characteristics ... wisdom and understanding; counsel and power; knowledge and the fear of the Lord ... and let's protect our children.

Psalm 101:2b-3      I will walk in my house in integrity and with a blameless heart. I will set no worthless or wicked thing before my eyes. I hate the practice of those who fall away [from the right path]; It will not grasp hold of me.
Posted by Pam Kohler at 6:30 AM