Do You Suffer From The Fear Of Man?

I find as I talk to my fellow Christians, and engage with the people that come to our ministry, that there are many concepts in the Bible that we take for granted. In other words, we assume that we are all on the same page and that we all have a common understanding. But what I've found is that, oftentimes, there is actually a misconception about what the Word actually is speaking to us. The concepts of "Fear of Man" and "Fear of the Lord" are two such concepts.
Let me begin by discussing the Fear of Man. Many of us have different fears ... fear of public speaking; the fear of heights; the fear of spiders, etc. But I believe that, at least in some small portion, we all have a fear of man.
The Bible tells us in Proverbs 29:25, The fear of man brings a snare, but whoever trusts in and puts his confidence in the Lord will be exalted and safe. So, if the fear of man can become a trap, we better understand what it is. And here is how I would explain it: the fear of man is an unhealthy concern about what other people may think about you, say about you, or do to you. All of that is another way of saying that the root of the fear of man is insecurity. And insecure people will seek their self-worth from the approval of others. So, it could be said that the fear of man comes from looking to the world for your sense of safety, happiness and confidence. 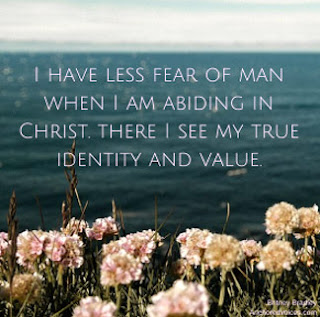 But do you see how absurd that is for a Christian? Why would anyone look for their self-worth or security in human beings who will fail you, or worldly systems that can be taken away? The only secure refuge in this life on earth is found in the Lord Jesus! That verse in Proverbs tells us seeking our security from people and the world is a trap, and it is the one who receives his self-confidence [and worth] from trusting the Lord alone that is the one who is truly safe and exalted! If we are looking to our fellow Christians or the world to tell us how wonderful we are, then our focus is on the wrong person and we are sure to be disappointed. It is the unchanging Word of the Bible that tells us God's faithfulness endures forever.
So if you find that you have a constant need of approval or acceptance; a need of recognition or honor; you crave the favor, friendship and applause of people; or you have a dread of being ridiculed or persecuted, then you might find yourself caught in some of the following snares:
1. The Snare of Deceit.  Anyone who is under the spell of the fear of man is double-minded—forever changing directions to suit the circumstance, because he has no confidence in his own worth. Remember when Abraham lied to Abimelech about Sarah being his wife? True, Sarah was his half-sister, but she was also his wife, and when he told the Egyptian king that she was not, it was a total lie. And then we see that same deceit/lie repeating itself in Abraham's son, Isaac, when he lies to the men of Gerar about Rebekah being his wife. Lying becomes contagious and a generational problem when families have a fear of man.
2. The Snare of Compromise.  Remember when Moses is on Mount Sinai receiving the Ten Commandments? The Israelites became impatient and were willing to settle for a substitute god made in the image of a golden calf. Aaron chose to respond to the demands of the culture around him, rather than remain steadfast in his faith of an uncompromising God. Today, too many of our American churches are accommodating a god of our own imagination instead of the GOD that really exists.
3. The Snare of Disobedience. God gives King Saul clear instructions to destroy all the Amalekites and their possessions. Instead Saul chooses to disobey those instructions and spare the king and the best of his cattle. It was too easy for him to make excuses for his insubordination. Listen to his actual words, which clearly show his fear of man ... I have sinned: for I have transgressed the commandment of the LORD… because I feared the people, and obeyed their voice”(1 Samuel 15:24). When the approval and acceptance of people becomes our motivation, instead of following God's lead, and being content with His opinion, then we are in bondage to the fear of man.
4. The Snare of Denying Christ.  The Disciples all abandoned Christ in His hour of need. They all fled in fear, and none more so than, Peter, who denied Him three times. I have heard it declared that no sin has sent more people to hell than the fear of man, and no sin has robbed Christians of the opportunity to witness of Christ than the fear of man. Peter's denial was spoken out loud, but have you denied Christ by your silence? Chosen to remain silent when you had the opportunity to declare yourself a follower of Jesus, because you feared rejection or shunning by others? If so, then you got caught in the snare of fear of man.
These are just a few of the snares that are lying in wait for us when we tolerate the fear of man.
We are called to love people, not need them! If you spend your life trying to satisfy and please people, there will always be someone you can't please. And that will become your obsession. So, how do we demolish the fear of man from our lives? The first thing we do is recognize it in ourselves. Be honest, and take your fears to God. Then begin rebuilding your faith through the Word and what the Bible tells you about fearing God, instead of man.
We begin by esteeming and valuing God's opinion above that of man. We need to be obedient despite our fears. We need to trust God to give us the power to go through whatever our fear situation is. We begin building new habits of faith -- step-by-step -- refusing to give into fear of criticism or humiliation or rejection. Obviously, Peter overcame his fear of man because he chose to die as a martyr rather than ever deny the Lord again.
I am not so naive to think that no one is immune to the fear of man in this life. We all have our flaws and weaknesses. I know I do! But the reason, as a culture, that we have so much fear of man is because we have so little fear of God. And that is another subject that I believe has been misunderstood in the Christian culture, and one that I will be exploring in the next post. Until then, let's pray that we can turn from seeking honor and approval from people to experiencing a life serving the living God.

Psalm 56:11   What harm could man do to me? With God on my side I will not be afraid of what comes. My heart overflows with praise to God and for His promises. I will always trust in Him.
Posted by Pam Kohler at 6:30 AM

Email ThisBlogThis!Share to TwitterShare to FacebookShare to Pinterest
Labels: Fear of Man