The Seven Mountains of Influence ... Biblical or Not?

I guess I am still puzzled by faithful Christians who deeply love the Lord, but struggle with seeing the inestimable and immeasurable depth of His Word. As I continuously exhort to all who will listen, everything in the Bible is about God. But everything about God is not in the Bible. By that I mean that there are an infinite number of concepts of the greatness of our God and they cannot all be contained in one book. And He delights in us gaining new understanding and revelation [by the Holy Spirit] of how we can partner with Him to bring knowledge of Him to the world -- to the unbelievers who don't know Him, and let me be frank -- to my fellow believers who could benefit the world from getting to know Him more.
So, today, I want to tackle a concept that can be construed as controversial within the Body of Christ -- the Seven Mountains of Influence. I say controversial because there are many Christians who will dismiss an aspect of God's authority and character if they are unable to find a concept mentioned in the Bible that is word-for-word, chapter and verse. But if you've read the last few days of this blog, you will be able to see just how important our Christian influence is to be. Ultimately, it will affect our very survival in the Tribulation to come. But let's take a look at why this particular concept is such a lightning rod in the Christian community.

Just what does the Seven Mountains of Influence mean? Very simply, it is an understanding that in order for the Church to impact the world for Jesus Christ, it would be necessary for the Body of Christ to influence the Seven Mountains of society. What are those seven mountains? They are Education, Religion, Family, Business, Government/Military, Arts/Entertainment, and the Media. Here's where the controversy begins ... there are those who have taken this simple concept and declared that those who are in agreement with it see it is a Mandate from God; that before Jesus will return, the Church must take control of these seven spheres of influence. I will be honest with you; from everything I have read, the original proposal of this concept was not presented as a prerequisite for Christ's Second Coming. And perhaps there are denominations who have corrupted the idea and declared it is as mandatory from God. And then, on the other side of the controversy, perhaps there are those who unable to accept any idea that is not listed Chapter and Verse [in the Bible] and, therefore, declare such concepts anti-Biblical.
Those among the Body of Christ who tend towards legalism or a religious spirit don't like terminology like "occupying" the mountains, "invading" the culture, or "transforming" society. They will also state that those who see the value in influencing these seven mountains perceive a duty of all Christians to create a worldwide kingdom for the glory of Christ. They will tie the theory of the seven mountains of influence to what they label as "dominion theology" or [taking back the dominion of the earth that was ceded to Satan by Adam and Eve in the Garden]. They will then take it a step further and declare that the principal goal of dominion theology and the seven mountains mandate is political and religious domination of the world through the implementation of the moral laws—and subsequent punishments—of the Old Testament. Whew! That's quite a stretch from the original presentation.
I'm sorry, but to me, this is just an example of a religious mindset! It reminds me of the Pharisees who were only able to conceive of God by a narrow set of standards derived from Rabbinic laws and teachings. Jesus comes with a new and broader understanding of the will and sovereignty of God and is declared to be blasphemous! The difference is that Jesus had a spiritual mind; the Pharisees had a literal mind. Jesus was opening a gate to a new perception of the Kingdom of God, but the Pharisees refused to move off their familiar track of tradition in the world. 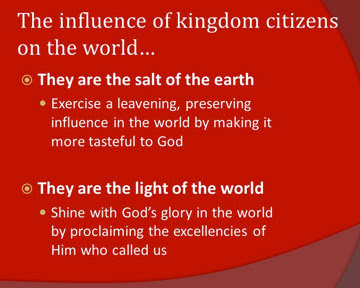 Does Jesus or the Bible ever say, "As followers of Christ, you are to have influence over these seven mountains of the world"? Of course not! But we are called to be "salt and light"; distinctive roles in the world. We are to be salt, as in preserving the world from the evil that is inherent in a society controlled by ungodly and unredeemed men steeped in their sin. And we are to be salt, as in a flavor enhancer; standing out from the crowd and increasing the taste for a world living under the guidance of the Holy Spirit and in obedience to Christ. We are to be light, as in letting our good works for the Lord shine forth as a "city set on a hill"; and letting our "light shine before men in such a way that they may see our good works, and glorify our Father who is in heaven". I don't know about you, but that sounds like influencing the world, doesn't it?
Furthermore, in addressing the criticism of "occupying" the spheres of Education, Religion, Family, Business, Government/Military, Arts/Entertainment, and the Media, doesn't Jesus tell us in Luke 19:13 to "Occupy til I come"? Another translations reads, "There was once a man descended from a royal house who needed to make a long trip back to headquarters to get authorization for his rule and then return. But first he called ten servants together, gave them each a sum of money, and instructed them, ‘Operate with this until I return.’" Still another translation instructs us to "do business with this until I return". It is clear to me that we are to "occupy" and continue the business that Jesus clearly came to do for the Father ... establish the Father's claim to this world and establish His Kingdom on earth; reclaim, if you will, dominion of the earth from Satan ... "Then the devil, taking Him up on a high mountain, showed Him all the kingdoms of the world in a moment of time. And the devil said to Him, “All this authority I will give You, and their glory; for this has been delivered to me, and I give it to whomever I wish". You can label that "dominion theology" if you want, but the Bible clearly says that Satan acknowledged he had authority over all the kingdoms of the world. And the last time I checked, the Bible said that God gave dominion over the world to Adam. So when Jesus says, "The Kingdom of God is at hand, [or is near]", He is announcing that the government of Heaven will be implemented upon the earth and that people should repent, believe the good news that He brought and put that message into action, changing their lives to reflect their belief and commitment, and thereby change their communities, cultures, and countries.
That's why I don't agree with the critics who have a problem with terminology like "invading the culture". Just consider Romans 8:37, "Yet even in the midst of all these things, we triumph over them all, for God has made us to be more than conquerors, and His demonstrated love is our glorious victory over everything!" I think we can agree if we invade the culture of Arts, Entertainment and the Media, we can conquer the seeds of sin. The success of Christian-oriented movies such as "I Can Only Imagine" and the PureFlix Film company are just a couple of examples. Think of the influence for Christ we can have when we invade the movie industry and the media.
And when it comes to "transforming society", the Bible is quite clear as to how we Christians are to live: "Stop imitating the ideals and opinions of the culture around you, but be inwardly transformed by the Holy Spirit through a total reformation of how you think. This will empower you to discern God’s will as you live a beautiful life, satisfying and perfect in his eyes". And what do you think happens when we are transformed? We become that salt and light that influences those around us! 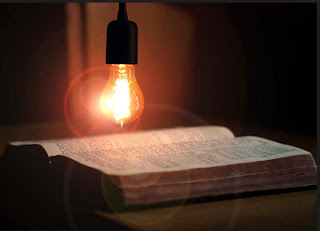 So, can we please try to look beyond our Church traditions and doctrines and understand that the Holy Spirit can bring us "divine concepts" that may not be word-for-word Biblical translations? Demanding literal accountability to the Bible is no different than the Pharisees inability to understand Jesus's statement, " I tell you the truth, no one can see the Kingdom of God unless he is born again." They totally missed the boat, so to speak! When they responded, "How can a man be born when he is old? … Surely he cannot enter a second time into his mother’s womb to be born!" it showed their unwillingness to accept anything other than their entrenched traditional thinking.
Remember, Jesus used parables, metaphors and veiled meanings that did not correspond to the "letter of the Law" that the religious leaders demanded. Do we not think that we Christians can present the foundation of Jesus's teachings in a new dialogue, yet with a synonymous message? I have no problem with saying that, as a follower of Christ, and an ambassador of God's Kingdom ["on earth, as it is in Heaven"], that I am committed to influencing those around me in the spheres of education, my faith, my family, our business, in the government of my country, in the movies/tv/books/internet that I choose to endorse, and in how I participate on social media -- all for the sake and glory of God!
So, can we agree to un-harden our hearts, take off the veils of tradition that diminish our spiritual sight, and discover the hidden glory of God? And then let's go out and influence the world for Jesus and the Kingdom of God! Future generations of believers will profit from your faithfulness to influence whatever "mountain" you are called to. For that influence will reverberate throughout the days of persecution. Know that you are a royal priest of the Kingdom and you have been given the authority to administer the Kingdom wherever you go. Praise God for His faithfulness!

1 Peter 3:16    "Having a good conscience; that, whereas they speak evil of you, as of evildoers, they may be ashamed that falsely accuse your good conversation in Christ."
Posted by Pam Kohler at 6:30 AM

Email ThisBlogThis!Share to TwitterShare to FacebookShare to Pinterest
Labels: Kingdom Living, Our Culture, The Kingdom of God