A Look At Anointed Women

If you are like me, you are deeply inspired by the stories in the Bible of men who have been anointed by the Lord to serve Him. They are charged with God's power to accomplish the Divine assignments He has appointed for their lives. Whose heart is not stirred by the anointing on Moses to lead the Israelites out of slavery in Egypt; or the anointing on Daniel, who taken captive as a teenager, influences some of the greatest kings in all of world history and is entrusted [by God] to receive revelation of the End Times.
Do you ever imagine what Joshua must have felt when God anointed him to take the Israelites into the Promised Land and defeat the pagan nations before him? And what about the prophet Elijah who is anointed to stand against 450 prophets of Baal and 400 prophets of Asherah? These mighty deeds are just a few of the accounts of God anointing men for His service. It's kind of daunting isn't it to think that we could be empowered with the same revelations and gifts of the Holy Spirit to carry out such important assignments for God and His Kingdom?
Yet that is exactly what I am telling you. It is not only men who walk powerfully in the Spirit, but we women also have a calling and an anointing on our lives. And the Bible gives us examples of women who stand as inspiration for us.  Let's take a look at three women, each with a different calling and Divine purpose in her anointing. Perhaps you will recognize yourself in one of them, and see your possibilities for serving the Lord.
Anna.  And there was a prophetess, Anna, the daughter of Phanuel, of the tribe of Asher. She was advanced in years, having lived with her husband seven years from when she was a virgin, and then as a widow until she was eighty-four. She did not depart from the temple, worshiping with fasting and prayer night and day.  And coming up at that very hour she began to give thanks to God and to speak of him to all who were waiting for the redemption of Jerusalem (Luke 2:36-38).
The Anna Anointing will be given to women in whom the offices of prophet, intercessor, and evangelist all converge. I'm not saying that these women will necessarily be prophets, but they will have a prophetic spirit. And through their night-and-day fasting and prayer, they will prophecy and testify of Jesus in their evangelistic efforts. Note that in the above Scripture, Anna does not actually give a prophetic word, but her actions are prophetic. 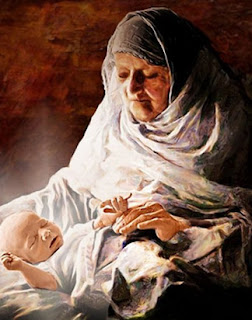 And note that Anna doesn't fit the image of a likely candidate that God would choose to prophesy about His redemption. She is 84 years old, widowed at a young age, and living in the shadows of the Temple, probably unnoticed by most people. God is looking for those same unlikely candidates today.
The Holy Spirit is raising up women in our time to pray effectively, fast consistently, and preach prophetically. I don't mean preach as in standing at a pulpit, but I believe the heart of the modern-day Anna will be given the grace (empowerment) to pray the promises of God as they are expressed in the Bible. I believe she will pray as an intercessor, inviting the Lord to reveal His love and empower the Body of Christ to fulfill the Great Commission, along with the signs and wonders that accompany it.
Women with the Anna Anointing will develop a listening heart that synchronizes with the heart and mind of the Lord. Just as Anna in the Bible, these women will dedicate their lives to worship, persevering in the promises of the Lord. The modern-day Anna, like her Biblical counterpart, will live a life of holy commitment to the purposes of the Lord. The Biblical Anna prayed night and day, never abandoning the hope she had that God would fulfill His promise of a Messiah. The modern-day Anna is praying and watching for the return of the Messiah, who she knows brings both justice and peace. Her prayers will be heard in Heaven and her sacrifice honored as she sees the Kingdom of God coming more in focus.
Esther.  Go, gather all the Jews that are present in Susa, and observe a fast for me; do not eat or drink for three days, night or day. I and my maids also will fast in the same way. Then I will go in to [see] the king [without being summoned], which is against the law; and if I perish, I perish.”  So Mordecai went away and did exactly as Esther had commanded him.
The story of Esther in the Bible is a fascinating one. She was born at a time when Israel was in captivity as a consequence to their disobedience to God. When Esther’s parents were killed, her cousin Mordecai adopted her as his daughter. Not only was Esther an ordinary woman living in a foreign land, but she was part of a minority race held in low esteem. But her beauty caught the eye of the Persian king and he took her as his wife. Mordecai advised her to keep secret her Jewish nationality because the King's advisor sought to destroy the Jewish people. But Esther trusts in God for her strength and finds the courage to destroy the conspiracy and save her people. 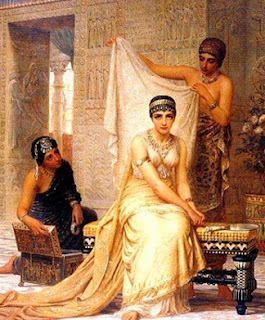 The modern woman with the Esther anointing will find that she has been given the grace to influence the current culture for the purposes of the Kingdom of God. Like the Biblical Esther, she will act out of faith, courage and righteous boldness to exercise wisdom to confront injustice and deliver this generation from destruction.
Although bold in their convictions, women with the Esther anointing will be patient, submitting to the processes and methods of the Lord. She will have a humble, grace-filled and teachable spirit; perhaps even being plucked out of obscurity (as the ancient Esther) to be placed in positions of authority. She will emerge from her comfort zone to speak new languages, learn new cultures, and overcome gender prejudices. She will not be intimidated at where the Lord is taking her, and she will have an anointing to gather people together for the purposes of the Lord; to call people to prayer and fasting to plead for life before the courts of Heaven and Earth. She will be willing to stand before ungodly civil authorities to see that the nation's policies, rules, regulations and laws be changed for the advantage of the Kingdom. Through her humble obedience, God will use the modern-day Esther to rescue individuals, change circumstances, and deliver nations.
Deborah.  The villagers ceased to be; they ceased in Israel until I, Deborah, arose; until I arose, a mother in Israel (Judges 5:7).
Deborah was a leader, a judge, and a prophetess in Israel – one to whom God could reveal His secrets. God used her to communicate His will to the people of Israel. When Deborah received instruction from God to go to battle against the Canaanite army, she moved to act on it. She didn’t sit weighing the pros and cons, thinking of all the things that could go wrong, or doubting her ability to do what He said. If God said it needed to be done, that was enough for her. Her faith in Him gave her the power to act. Everything that was necessary to accomplish His will she would receive from Him. 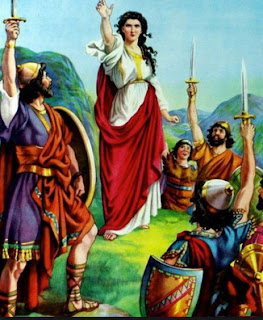 Just like the Biblical Deborah, women of today with the Deborah anointing will be blessed with the gift of leadership. They will be women who have developed the character and ability to inspire and disciple the next generation to walk in the fullness of their own calling. They will lead others to stand for God's righteousness in the midst of a wicked and perverse culture.
Women with the Deborah anointing will have a mother's heart to nurture; through mentoring, discipling and training, they will nurture a generation to maturity in seeking the Lord's will. They will be capable of strategizing with the Lord to see His battle plan come to fruition. They will not be afraid to stir up or excite public discussion with the goal of producing change in the Body of Christ.
The woman with the Deborah anointing will not be afraid of controversy, and will not hinder the counsel of the Holy Spirit. She will break away from traditions and conventional customs -- not out of rebellion, but in obedience to God to set people free. She will be bold, yet acting and speaking in love. She will be able to balance the roles of wife and leader, and be able to discern the times and seasons of the Lord -- knowing when it is time to bless, when to deliver, and when to go to war. And above all else, the Deborah anointing sees a woman develop a lifestyle of praise and worship, where she receives the strength and help to carry out the Lord's commands.
So, these are just three women whom God anointed for important and specific assignments. Just as in Biblical times, God is calling the women of today to a purpose greater than themselves. God is awakening women and positioning them with opportunities to influence their families, their communities, their churches, and their nation for His Kingdom. Any of these stories could be yours. Or God might have a unique plan for your life to accomplish His goals. All it takes is a willing heart and spirit to be His vessel. If you let Him, God can use you for His glory!

If you would like to explore more about these specific women and their anointings from God, I recommend a series of books by Michelle McClain-Walters in which she explores how we can all be inspired to receive the Anna Anointing, the Esther Anointing, and the Deborah Anointing.

Email ThisBlogThis!Share to TwitterShare to FacebookShare to Pinterest
Labels: God's Call On Your Life