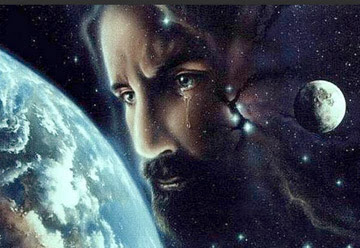 Jesus wept. This is the shortest verse in the Bible and it occurs in John, Chapter 11 as Jesus approaches the tomb of Lazarus, His friend who had died. I think He probably wept for so many reasons -- chief among them, His compassion for those who suffer. But I also think He wept over the damage and distress and destruction that Death causes, knowing that the wages of sin are Death, and Death was what Satan claims as his victory. I can imagine that Jesus felt all that as He stood at the tomb and comforted Lazarus's family.
But I am also willing to declare that Jesus wept on Tuesday, January 22, 2019. That is the day that New York Governor Andrew Cuomo signed the inaccurately named Reproductive Health Act (RPA) into law. There is nothing "healthy" about it for the unborn. In a nutshell, the law allows third trimester abortions "when the health of the mother is in danger", and it removes abortion from the state’s criminal code. This would protect doctors or medical professionals who perform abortions from criminal prosecution. The law also allows medical professionals who are not doctors (such as nurse practitioners, physican's assistants, and nurse midwives) to perform abortions in New York. Additionally, the law states that abortions can be performed after 24 weeks if the fetus is not viable, [or when necessary] to protect the life of the mother. These "exceptions" are rather broad, indicating that age, economic, social and emotional factors are reason enough. And perhaps the most egregious part of the bill is that it defines a "person" as "a human being who has been born and is alive".
How do you think Jesus, the Creator of that person, feels? The Bible tells us He knew that fetus before He formed it in the mother's womb (Jeremiah 1:5). Psalm 139:13-16 tells us that He knitted that fetus in the mother's womb and that the baby is "fearfully and wonderfully made"; never hidden from its Creator. And if that is not enough to dissuade those who favor abortion, let them read Exodus, Chapter 21, where God considers penalties for personal injuries, and then take a good, hard look at verses 22-25, which state, If men fight with each other and injure a pregnant woman so that she gives birth prematurely [and the baby lives], yet there is no further injury, the one who hurt her must be punished with a fine [paid] to the woman’s husband, as much as the judges decide.  But if there is any further injury, then you shall require [as a penalty] life for life, eye for eye, tooth for tooth, hand for hand, foot for foot, burn for burn, wound for wound, bruise for bruise. It should be clear from this passage that God considers a baby in the womb to be as human as a full-grown adult, with all the accompanying privileges to life and law. Abortion is a matter of life or death to a human being made in God's image.

I know all the arguments made in favor of abortion ... what about the cases of rape or incest? When the mother's health is in jeopardy? And I will grant those are tragic and difficult circumstances. But life comes from our God, and Death is the penalty for our sinful nature. I would ask those who consider abortion in these situations to consider the words of the Lord in Isaiah 45:10-11, Woe to him who says to a father, ‘What are you begetting?’ or to a woman, ‘With what are you in labor?’”  Thus says the Lord, the Holy One of Israel, and the one who formed him: “Ask me of things to come; will you command me concerning my children and the work of my hands? All children are a blessing from God and made by Him. It is the folly of men to think they can decide if that child [created by God] should be born or not, and the purpose Jesus had planned for that child.
Yet that is exactly what the New York Reproductive Health Act states: “Every individual who becomes pregnant has the fundamental [basic, essential] right to choose to carry the pregnancy to term, to give birth to a child, or to have an abortion".
I believe Jesus is weeping as he witnesses the pride of man in this law, which states, “Third-trimester abortion will be allowed under the new law when a pre-born child is diagnosed with a condition that will cause him or her to die at or shortly after birth”. Where is the fear of the Lord; that recognition of His ability to perform miracles and to heal? But the arrogance becomes even more pronounced. The bill also states that the new law removes protections for babies born alive after an abortion, repealing the requirement for a second physician to be on hand in case an attempted abortion past 20 weeks yields a live infant.
And in case you doubt that Satan is laughing in delight, the New York law sets a precedence preventing "the enforcement of laws or regulations that are not in furtherance of a legitimate state interest in protecting a woman’s health that burden abortion access". In other words, the New York Reproductive Health Act would be immune to any laws set forth by the U.S. Supreme Court. Adding insult to injury, Governor Cuomo gave Sarah Weddington, the attorney in the Roe v. Wade case, a special seat next to him as he signed the bill into law. What arrogance!
I believe Jesus is weeping because He sees man choosing Death over Life; Satan's victory over Christ's victory. And He is weeping over 880,000+ of His creations being destroyed every year in the United States. The Word tells us that Satan comes to "kill, steal, and destroy" and he accomplishes all those goals in the practice of abortion -- murdering the unborn; stealing the life from an innocent person; and destroying what Jesus created. And He is weeping that those who have been appointed to govern us do not know Him. If they did, they could not legislate as they do. And He is weeping that men and women are willing to follow such ungodly and unrighteous laws because their hearts have been so defiled.
I usually do not comment on so-called "political" issues, but this is an issue of morality and a flagrant act of rebellion by mankind towards our Holy God. Who are we to determine that a life begun in the womb [by the hand of God] should [or can] be terminated? Yes, you can find facts that the number of abortions have decreased by a couple of thousand in the last couple of years. But Satan could not let this go unchallenged, so now, in cooperation with rebellious men, he is broadening his attack upon the unborn, stealing and destroying life, even after birth! And it is all in the name of "reproductive rights".
Pure and simple, it is man choosing to defy God ... and on January 22, 2019, I believe the Father, the Son, and the Holy Spirit all wept. And I ask that all of you reading this get on your knees and pray for our leaders and our nation. Pray in repentance and ask forgiveness for this egregious sin! I cannot ignore the warning in Ezekiel 33:25; a warning given to the arrogant and wicked ... Thus saith the Lord God; Ye eat with the blood, and lift up your eyes toward your idols, and shed blood: and shall ye possess the land?  Pray that the hearts of our citizens will turn away from the Billion Dollar industry that is fed by the blood of innocent children. Pray that our nation will be cleansed of its false worship of Self. Our God is a God of Love and Redemption, but He is also a God of Judgment against the unrighteous and the wicked. And they will not be spared unless they repent and turn from their evil ways.

Proverbs 8:1-7   Can't you hear the voice of Wisdom? .... I’m calling to you, sons of Adam, yes, and to you daughters as well. Listen to Me and you will be prudent and wise. For even the foolish and feeble can receive an understanding heart that will change their inner being. The meaning of My words will release within you revelation for you to reign in life. My lyrics will empower you to live by what is right. For everything I say is unquestionably true, and I refuse to endure the lies of lawlessness—
Posted by Pam Kohler at 6:30 AM