Exalting The Birth Of Jesus

Today, I am unconcerned if Jesus was born on this day or on another. Today, I simply want to honor the indescribable and incomprehensible love of our Father in Heaven that He would send His Son -- a most intimate part of Himself -- to earth to identify with us and redeem us from our sins, transgressions and iniquities; in all the ways we have been rebellious against His Holiness.
And I think it is important that we take the time to see what the Word has to say about this sacred event that is simple, yet so profound, for all of mankind. After all, we only have a few verses in the four Gospels that even attempt to describe it -- although it was prophesied for centuries before. So, let us consider what Matthew, Mark, Luke and John present under the inspiration of God, the Father, and His Holy Spirit. Perhaps we can comprehend the heart of God for us. 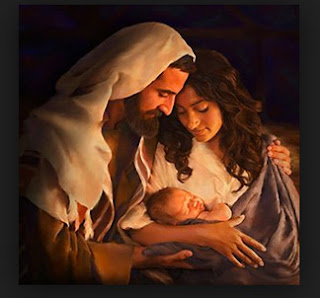 Would it surprise you to know that a lot of what we incorporate into the "Christmas story" of Jesus's birth comes from Christmas carols that have come down to us through the years? We hold dear the images of shepherds and angels on high; the exhausted holy family looking for shelter among inns that had no room; the birth in "a manger" among farm animals, with the Wise Men from the Orient in attendance. The sentiments touch our hearts, but to get the true source of Jesus's birth, we must take a look at the Gospels and their four very distinct and different renditions.
The Gospel of Mark is thought to have been the first of the Gospels to have been written, and has been variously attributed to John Mark, a companion and interpreter for the Apostle Peter; to Peter, himself; and to an anonymous First-Century Christian. Since it is the oldest of the Gospels, it is interesting that Mark records nothing of the birth of Jesus. This book begins with the calling of John the Baptist to preach in the wilderness. Jesus doesn't appear in this narrative until He comes to be baptized at the River Jordan by John.
Regarding the birth of Jesus, the Gospel of Mark writes from a "narrative of omission", meaning the purpose of this Gospel is not to focus on the Holy birth, but to point us to the service of the Lord. Mark is writing to the believers in Roman society [who were used to social classes steeped in honor and status]. He wants his readers to understand it is not important where a servant is born or from which family he comes – it is his service that defines him. Therefore he paints for us a picture of hidden and radical service by One given all authority (our Lord), and calls the audience of this Gospel to follow the example of Jesus that [as Lord] defined His mission and ministry by His service to others. Mark is not denying the holy birth of Jesus, but rather focuses on His holy mission.
Matthew, in contrast to Mark, is writing to an audience of Jews and begins his Gospel with a detailed geneology that shows us Jesus is a descendant of both Abraham and King David. It is his intention to make readers understand that Jesus will be a king greater than David, and a teacher/leader greater than Moses.
Matthew's Gospel makes a simple statement of conception by the Holy Spirit and then makes Joseph, "a just man", a central figure in the birth narrative. Matthew gives us details of the search by the Wise Men from the East who came to Jerusalem looking for the King of the Jews. When the anti-Christ spirit in King Herod sought to destroy the Christ child, an angel of the Lord appeared to Joseph and instructed him to take the child and His mother to Egypt and remain there until Herod had died, whereupon they were to return to Nazareth. Matthew lets us know all this was according to the prophecies in the Old Testament, and is the fulfillment of Hebrew Scripture .... Emmanuel, God with us.
Luke's Gospel narrative of the birth of Jesus is written to the Gentiles, and focuses on the role of the Holy Spirit and gives attention to the women in the story (Mary, Jesus's mother, and Elizabeth, the mother of John the Baptist). It is the longest narrative of the life of Jesus in the four Gospels, and gives us a broader picture of the social status of Joseph and Mary and the humble circumstances of Jesus' birth in a stable. It is especially noteworthy that Luke makes it clear that angels announced the impending birth of the Holy child to ordinary shepherds in the field, rather than to the rich, privileged and powerful Wise Men (astrologers) of the East. They had ascertained the time of Christ's birth according to the stars and the prophecies.
There is beauty in Luke's rendition as he shows us God ridding Himself of His divine nature to be born as Jesus, a human child; born among the poor but reflecting God's desire that men experience His peace and good will towards all. 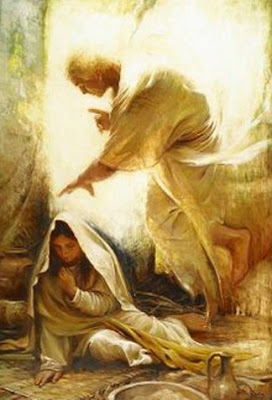 At this point, I would like to make mention of another attribute of Luke's narrative. He takes great care to share the interchange between Mary and the angel Gabriel, and the revelation that she would conceive a child in her womb when "the Holy Spirit will come upon you, and the power of the Most High will overshadow you; therefore the child to be born will be called holy—the Son of God".
In these latter years, there has been much effort to disprove "the virgin birth" by claiming it is a product of a mistranslation; citing that the Hebrew word for"virgin" actually means "young woman". But this does not take into account that at the beginning of his Gospel, Luke takes the time to explain that he was writing "an orderly account" of the things believers had been taught according to the "eyewitnesses and ministers of the word". In other words, Luke was doing his own investigation, and critics have long surmised that he had ample opportunity to speak to interview witnesses to Jesus's birth, including Mary herself.
The details with which Luke presents his story seems to indicate that he has derived his information from a primary source; either Mary, herself, or someone to whom Mary had relayed the intimate details of the events with the angel Gabriel and the Holy Spirit. Remember, Luke was a physician, so he would be qualified to investigate a virgin birth, and it is clear he believed Mary's account.
Now for the final account of Jesus's birth, we take a look at the Gospel of John.  His is quite different from the human accounts of Matthew and Luke. John presents the Lord's birth in heavenly and spiritual terms... His birth began in Heaven; "In the beginning was the Word, and the Word was with God, and the Word was God. " John goes on to describe Jesus's birth in powerful and undeniable language: "And the Word became flesh and dwelt among us, and we have seen his glory, glory as of the only Son from the Father".
Although John does not mention Mary, Joseph or any of the other people that Matthew, Mark, or Luke mentions, he is nevertheless making it clear that he believes the birth of Christ is the most important event in mankind's history... "In Him was life and the life was the light of men. The light shines in the darkness, and the darkness has not overcome it".
So what are we to make of these four very different and distinct narratives of the birth of Christ? He came as the King of the Jews, worthy of obedience and worship (Matthew); He was born as the compassionate human Savior to the poor, overlooked, neglected (Luke); Jesus as Lord, comes to show us a new way; free from the limitations of social status (Mark); and Jesus is God, born in the flesh to give us a new beginning and to shine His light into the darkness of this world.
So whether the Christ child, the Anointed One who came to save the world, was born today or not doesn't really matter. What is important is that we believe He is who the Gospels say He is -- God in the flesh; holy and incorruptible; the Light of the World ; and the Savior of the lost world. So, let us all come together and worship Him in reverence and fear... "For there is peace and a good hope given to the sons of men."

Thank you to Dr. Corné Bekker, Assistant-Dean of Rhema Bible College in Johannesburg , South Africa, for his writings comparing the Birth Narrative of Christ in the four Gospels.

Luke 2:10-11    But the angel reassured them, saying, “Don’t be afraid. For I have come to bring you good news, the most joyous news the world has ever heard! And it is for everyone everywhere! For today in Bethlehem a rescuer was born for you. He is the Lord Yahweh, the Messiah.
Posted by Pam Kohler at 6:30 AM