What The World Needs From Us

I am officially back from my vacation and I have to tell you that being removed from my normal environment has given me a new perspective on the role of us Christians in the world. You see, Mark and I were in the company of a group of nearly 20 people, most of them years younger than us, and only one woman who was a fellow Christian. We had some good, long talks with her about our faith experiences, and it was interesting to find that she was pretty well versed on spiritual warfare, baptism of the Holy Spirit, and walking in spiritual gifts. The concept of Inner Healing and Deliverance, however, was unfamiliar territory, but she was not adverse to seeing their significance in spiritual healing.
But other than this one encounter, everyone else wasn't too keen on revealing what they felt about a relationship with Jesus; shying away from any religious discussion. But, as always, when your goal is to share the Good News of the Kingdom of God, Jesus will give you the opportunity to sow a seed or two. And there was a particular conversation that Mark took part in that captured the interest of several thirty-something's one night at dinner. Let me share the gist of it ...
First of all, you need to understand that my husband has a keen interest in understanding the historic religions of the world and how they relate to Christianity. It is important to have a knowledge of what came before Christ so that one can intelligently [and accurately] represent how our God is superior to the gods of other religions. In doing his research, he has become quite well-informed about these lesser gods, knowing their names and becoming aware of their existence and influence upon the people of today. Therefore, he has no hesitancy in engaging in a discussion with the Millennial generation, who proudly display these gods upon their bodies in the form of tattoos. In fact, it never surprises me when he asks these younger people about their tattoos, because he has a genuine interest in knowing if they are aware of the spiritual doors they are opening. 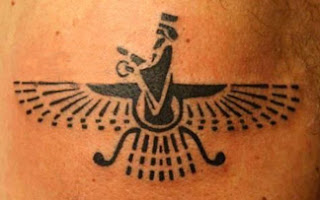 1 Timothy 2:3-4   This is good, and it is pleasing in the sight of God our Savior, who desires all people to be saved and to come to the knowledge of the truth.