He noticed a leafy fig tree in the distance, so He walked over to see if there was any fruit on it, but there was none—only leaves (for it wasn’t yet the season for bearing figs). Jesus spoke to the fig tree, saying,
“No one will ever eat fruit from you again!”
And the disciples overheard Him. 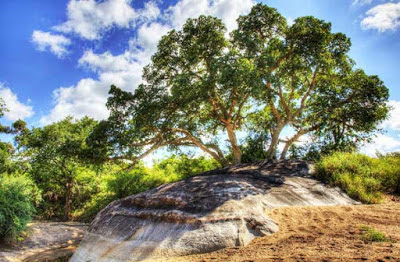 There are two accounts of Jesus "cursing" the fig tree in the Bible, although I would point out that Scripture says Jesus "spoke" to it, not cursed it. Somehow, I think our Church tradition has interpreted that what He spoke was a curse. So let's take a look at both accounts, and see if we can discern what is really going on.
The account in Matthew has a different context than this one in Mark.  Just as in Mark, the Matthew 21:18-22 version has Jesus declaring that the fig tree will not be productive for eating fruit ever again, and then it withers before Him.  But when asked by His disciples how the fig tree could wither so quickly, Jesus gives them a lesson on faith; that faith is an act of one's will with persistence and perseverance ... "If you have faith and do not doubt, you will not only do what has been done to the fig tree, but even if you say to this mountain, ‘Be taken up and thrown into the sea,’ it will happen".  He is showing them that faith is being steadfast (or unwavering) in doing something despite difficulty or delay in achieving success.
But here in Mark, the story of the fig tree has a different meaning.  Here Jesus sees a fig tree in the distance, and being hungry, He goes to see if He can find anything on it. But when He arrives at the tree, all He finds are leaves -- no fruit.  The Bible tells us it's because it is not the season for figs. And then Jesus speaks to the fig tree with a declaration that no one would ever eat fruit from it again.
So what's up with this fig tree?  And why did it's absence of fruit result in such condemnation from Jesus?  First of all, we need to take a look at the significance of figs and fig trees in the Bible.  Remember, God doesn't do anything without a purpose.  Figs are actually throughout Scripture, beginning in the Garden of Eden, where fig leaves covered the shame of Adam and Eve when they discovered they were naked.  Throughout the Bible, the plant becomes a symbol of prosperity, well-being, and security. Along with the vine, to sit under the plentiful shade of your own fig tree is the epitome of safety, peace and good fortune in many Biblical passages. Specifically, Micah 4:4 says, Each of them will sit under his vine, and under his fig tree, with no one to make them afraid, for the mouth of the Lord of hosts has spoken.
These plants don’t grow overnight, and it takes time to culture and nurture them – their maturity indicates that the gardener has been continuously and steadfastly there, tending to their growth over the years. And since Jesus states in John 15:1 that He is the True Vine, and my Father is the Vinedresser (Gardener), the point of these verses in Mark comes into focus.  Actually, I believe there is a dual significance to Jesus's word to the fig tree.
First of all, the fig tree points to the nation of Israel, which had been planted by God and nurtured for so long as His chosen people.  He had remained steadfastly beside them, tending to their growth down through the centuries.  The fact that this fig tree did not have any fruit on it at all, despite the fact that it wasn't the season for figs, showed Jesus's [and the Father's] disappointment and frustration.  After all the tender-loving care the Father had put into the nation of Israel, there should have been some evidence of fruit remaining on the tree.  Since Jesus only said or did what He heard from the Father, we can surmise that God was nearing the time when Israel would be blinded and ineffective in spreading the Gospel.
But there is a second aspect in view ... If we look at these verses from the context that the fig tree represents Believers, Jesus has the right to demand and expect fruit from us at all times -- both in and out of season.  And when we recall that there is actually a Fig Tree Generation spoken of in Revelation 6:13 -- that generation that is alive when the Sixth Seal is torn open and terror reigns on the earth -- it is important that we be bearing fruit in this season, regardless of whether it is time to harvest or not. We should be doing the miraculous works of Jesus at all times, not just when it is practical and in season.
To be honest, the meaning behind the "cursing" of the fig tree can only be surmised, and must be looked at through a supernatural lens. But there is much symbolism attached to the fig tree throughout Scripture, and anytime Jesus is looking at the fruit being produced, we know it has significance for us.  May we all seek to be fruitful and prosperous for the Kingdom, so that when our Lord measures what we have yielded for Him, we will not be found lacking, and be the cause of His disappointment.

Current Note: Much and too little has changed since I posted this in May, 2017. I am so pleased that I am seeing fellow Christians come alongside me and Mark to produce fruit for the Kingdom of God. At the same time, there are other Believers who cannot overcome their hesitancy to partake in the richness of the Kingdom, no matter how much we share our joy. And honestly, we are not responsible for their actions; we are only accountable for sharing the Good News of the works that Jesus did and to which He has called us. We've done our part and pray that their hearts will be made alive with the desire to please the Lord.