My husband and I will be traveling for the next couple of weeks, and it will be difficult for me to get an internet signal to upload new posts for you. So I have decided to take a look at several Scriptural passages that I have talked about before and present them to you again. I have chosen those I feel are the most relevant to us leading our lives in Spirit and Truth.
Repeating the Word is never a bad idea, and these particular passages are speaking to my spirit, even as I see them particularly appropriate for some issues my fellow Christians are dealing with today. So even though I may not be writing in a current time-frame, I think you will still find value in what the Bible speaks to us through these powerful words. So, if this is the first time you've read this post, or the second, I pray it will bless you.


Then Jesus said to them again, Peace to you; as the Father has sent Me, I also send you [as My representatives]. And when He said this, He breathed on them and said to them, Receive the Holy Spirit. If you forgive the sins of anyone they are forgiven [because of their faith]; if you retain the sins of anyone, they are retained [and remain unforgiven because of their unbelief]. 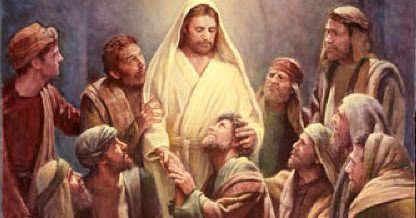 Current Note: This Scripture has particular significance to me today because my heart is broken for the number of marriages that I see the Enemy attacking. I truly believe this Scripture is telling us that forgiveness is the key to the restoration of relationships, and this is especially important when it comes to the restoration of a marriage. If you are unable to forgive your spouse, then I think it is important that you remit their sins to Christ -- hand them over [or release] the sins to Jesus and let Him deal with them. You have a choice -- forgiveness or remittance. Either way, unforgiveness will not be a stumbling block to you.