Why Did God Create Angels? 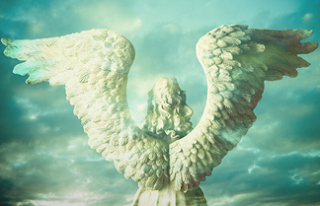 First of all, it is important to realize that angels exist and that they are an integral part of our Bible. Through a cursory examination of my own, I found at least 100 references to angels, and one source (Quora.com) reports that angels are mentioned 296 times throughout the Old and New Testaments.
And I want to make it very clear from the beginning of this post that just because I am looking into the subject of angels and how God sees them, DOES NOT mean that I am worshiping them! I also discern a form of legalism whenever a term is developed to describe a belief that more rigid Christians do not want to consider, and in this case the term is "angelology". I know that this is a very common concern among many Christians, but I assure you that there are many of us who have the maturity of faith to look at a theme within the Bible and not be deceived.
I also want to preface this post with the fact that I have recently attended a one-day conference with internationally recognized and ordained minister of the gospel, Joshua Mills. Joshua walks in the glory realm of God and his supernatural praise of God testifies of the unfathomable greatness of our Father in Heaven. This particular session was about angels and I was amazed at the information that is available to us in Scripture; information that is present to help us develop not only personal, but accurate and trustworthy beliefs about angels.
To begin with, I want to establish a few DON'TS we can all agree on: we are not to worship Angels. We worship God, who is the Creator of Angels. Scripture makes this very clear: Let no one defraud you of your prize [your freedom in Christ and your salvation] by insisting on mock humility and the worship of angels, going into detail about visions [he claims] he has seen [to justify his authority], puffed up [in conceit] by his unspiritual mind (Colossians 2:18). The point here is not to discount visions one might have, but to ignore any encouragement to worship angels.
We do not pray to the Angels. Revelation 8:3 tells us that Angels collect our prayers as they are directed to God and present them at the altar before His Throne: Then another angel with a gold incense burner came and stood at the altar. And a great amount of incense was given to him to mix with the prayers of God’s people as an offering on the gold altar before the throne. Again, we do not pray to Angels, but pray to God to release them to do the assignments He gives them to serve us. And before anyone disputes this statement, please read the next paragraph.
And lastly, we do not serve the Angels. They serve us as Hebrews 1:14 declares: What role then, do the angels have? The angels are spirit-messengers sent by God to serve those who are going to be saved. The Aramaic translates this verse as “The angels are spirit-winds-of-ministry sent to minister to those destined to receive salvation.” The angels are glad to minister to us, for they see us “in Christ.”
Hopefully, this will reduce any doubts that I am pushing an agenda to worship angels. But just as I have shown you what we are not to do, I would now like to show what Scripture tells us about how we can relate to Angels. First, it is important to note that Angels 1) obey God and 2) obey His Word ... Bless the Lord, you His angels, You mighty ones who do His commandments, Obeying the voice of His word! (Psalm 103:20). So that should tell us that not only do Angels obey God's voice when He commands them, but when our voices [in prayer] invoke the Word of God, and Jesus's name, God releases them to fulfill our petition. Remember, they are sent to minister to us, the heirs of salvation.
So read what Jesus says: I tell you the truth, everyone who acknowledges me publicly here on earth, the Son of Man will also acknowledge in the presence of God’s angels (Luke 12:8). If we declare Jesus as our Lord and Savior, He endorses us in the midst of Heaven's angels. And how many angels are there in Heaven? The prophet Daniel had a vision of a thousand thousands attending God, and ten thousand times ten thousand standing before Him (Daniel 7:10). That's over 100 million angels! John heard the voices of thousands and millions of angels around the Throne (Revelation 5:11). And Luke reports that a multitude of the heavenly host (an angelic army) appeared at Christ's birth (Luke 2:13-14). I think it's safe to say that we Believers are known to untold numbers of angels in Heaven! 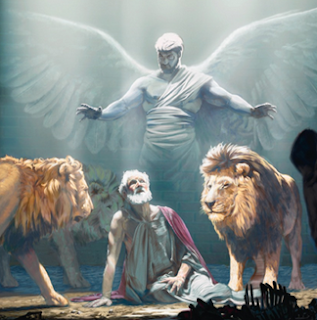 From just this small amount of information from Scripture, it should be clear that our prayers and our voicing the Word of God enable Angels to come to our assistance. Remember that our God is Immutable; He never changes His ways or character. He has set an order to His Creation, and the Angels are part of that orderly system. We only have to look at what the Angel told Daniel: "Since the first day that you set  your mind to gain understanding and to humble yourself before your God, your words were heard, and I have come in response to them." And that wasn't the only time Daniel's life was affected by an angel... He had a powerful testimony before King Darius: My God sent his angel to shut the lions’ mouths so that they would not hurt me, for I have been found innocent in His sight. And I have not wronged you, Your Majesty. The same holds true for us! Our prayers release Angels to do the assignments they were created for -- to serve us and protect us.
We must give voice to God's Word through prayer and declaration! Remember, Hebrews 1:14 says that Angels are spirits sent by God to minister to us -- and they are activated by our prayers and declarations, in the Name of Jesus. So in what spheres of our personal lives can we expect to engage with angels? Like any good father, our Father in Heaven desires to protect us; deliver us from harm; and give us joy, peace, and prosperity.  Psalm 91:11-12 tells us that God will command His angels to protect and defend and guard us in all our ways; rescuing us from Satan's traps so that we don't stumble. There is even a hint that we each have guardian angels... Jesus says, in Matthew 18:10, See that you do not despise one of these little ones. For I tell you that in heaven their angels always see the face of my Father who is in heaven.
My mother-in-law praises God for saving my husband when he was a child. She was in a car line to pick him up from kindergarten and she saw Mark running towards her, excited to show her a paper in his hand. But the wind blew it out of his hand as he stepped behind a car, and he bent down to retrieve it.  The next thing she saw was the rear back-up lights of that vehicle, whose driver was unable to see Mark bent over. She said she screamed but nothing came out of her mouth, and she began to cry and pray because she knew he didn't have time to get out of the way. But through her tears, she said she saw something miraculous. It was like an invisible force lifted him up and placed him on the curb, out of harm's way. To this day, the only explanation that makes sense to her is that an angel protected him.
Then there is the case of the Angels assigned to the various churches in the Book of Revelation. It is clear in Revelation, Chapters 2 and 3, that each church and ministry is assigned Angelic helpers to labor in their end-time work for God's Kingdom. I have heard some teachings that "angels of the churches" is referring to Pastors, but every translation I have read explains "angel" to mean "messenger/divine messenger". It makes perfect sense to me that God would assign His Angels as support-workers and helpers to accomplish His inspired visions and goals for a church. And we even see God sending an Angel to give holy revelations and directions, as when He sent an Angel to the evangelist, Philip. Instead of returning to Jerusalem with Peter and John, the Angel told Philip, Get up and go south to the road that runs from Jerusalem down to Gaza, where God had arranged for him to meet with the Ethiopian eunuch and preach Jesus.
I know this is a short and imprecise expository on the existence of angels and the roles they play in our lives. So, if I had to summarize this concept it would read like this: God loves us so much that He has commanded His created beings, the Angels, to minister to us; to protect us, to guide us, to comfort us -- to meet our every need according to what the Word says God desires for us. The sole duty of Angels is to follow the commands of God, and God loves to answer our prayers. They are an important part of His creative order and are valuable in the lives of God's children.
And remember the verse where Jesus stated that the little children had angels that protected them? Well in the parable of the rich man and the poor man, Lazarus, in Luke 16, it gives me great comfort to read that when Lazarus dies, it is angels that carry his spirit to Abraham's bosom (Paradise). So, it appears to me that angels attend to us throughout our lives here on earth. And, yes, we do not worship them, but instead worship our Father who has appointed them to minister to us.
The truth is, we modern Christians don't really know much about the spiritual realm where Angels reside. Because they are spirits rather than physical beings, we may well be unaware of their presence. But Scripture makes it very clear that they are real and they exist to serve us at the command of the Father. Our challenge is to learn how to activate their ministries through our prayers. Our faith in the Word of God -- spoken and declared -- can actively release the Angelic realm into our lives. All we have to do is believe what the Bible tells us. They are just waiting to minister to us!

Email ThisBlogThis!Share to TwitterShare to FacebookShare to Pinterest
Labels: Angels