The Reckless Love Of God


Do you ever have those days where it seems God brings things together and you get that fleeting glimpse of the reality of Heaven on earth? For me, it was the convergence of several things that touched my heart and with which I was familiar, but they all came together in a flood of spirit consciousness of God's Goodness. I know that probably doesn't make much sense, but I honestly don't have the words to give this awareness its due. So let me just tell you how my day went.... 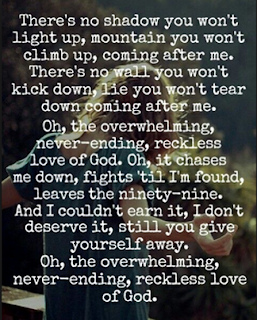 It began with a Sabbath morning of worship. I am able to stream worship music from Bethel and Hillsong on my TV, so I spent the morning cleaning my house (and my soul) to the sounds of worship changing the atmosphere in my home and my heart. And I'm sure most of you are familiar with the award winning song, "The Reckless Love of God" by Cory Asbury. I heard it that morning, and the lyrics washed over me .... Oh, the overwhelming, never-ending, reckless love of God. Oh, it chases me down, fights til I'm found, leaves the ninety-nine...
For some reason, the tears that always come with that song were even more heart-rending than usual. Why, I wondered? As the day unfolded, it would become apparent. Mark and I were to spend the day with his parents, sister, and our niece -- always something we look forward to. And Mark had it on his heart to share the 2014 Darren Wilson film "Holy Ghost" with our niece, Kaylee, who has such a heart for Jesus (and is even writing her own blog about what faith looks like for a Millennial).
As we suspected, she was unfamiliar with this innovative -- and let's face it -- risky film. It's not exactly the kind of message that mainstream Christian churches embrace or even seek. Directed by film-maker Darren Wilson, the purpose of the film is unashamedly provocative: to prove the presence of God is real. And we hear Darren proclaim at the beginning of the film, "I wanna take the greatest risk possible as a filmmaker, to make a movie that is completely led by the Holy Spirit… just show up wherever he leads me, find the adventure, and make God famous".
So, we got our chance to suggest that we sit down, as a family, and watch one segment of the film, hoping to open up a discussion of God's immense ability to love. If you are unfamiliar with the film, there is a portion that focuses on the heavy metal band, Korn, and two of its members, Brian "Head" Welch and Reginald "Fieldy" Arvizu. They give their testimonies of years of drugs and anti-God living, and their "lostness". But then they tell of how Jesus chased them down, and changed them forever. The film then goes on to show them accompanying radical evangelist Todd White (a former atheist and 22-year drug abuser, himself) among the crowds of fans to share a simple Gospel message of Jesus loving them and wanting to heal them, both physically and spiritually.
And here's where we had the opportunity to have a discussion with our family. How did they feel about these band members continuing to sing in the band Korn; singing lyrics that are obviously offensive and vulgar by society's standards? How does it coincide with their faith in Jesus? Can the two exist simultaneously? It was Kaylee's understanding I was most interested in, because she is the next generation to carry the Kingdom message forward. Would she get it?
She did! She saw that this particular segment of the population needed to hear about Jesus, see the miracles He had done in the lives of the band members, and be presented with a new way to live. Even my seventy-something in-laws recognized that the tattooed, heavy-metal crowd would never be willing to hear about Jesus from us. But, those band members could reach them with the life-giving message of Jesus and they would listen! As I told them, "Do I wish they would change their music, get rid of the f-word and other offensive language, and sing more wholesome songs"? Of course! But then they would lose their influence over the people who come to see them and like that form of music. 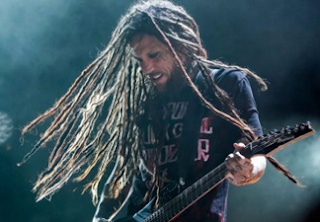 And here's an interesting fact: in 2005, Korn's management announced that after almost 12 years with the band, Brian Welch had left Korn, citing that he had "...chosen the Lord Jesus Christ as his Savior, and will be dedicating his musical pursuits to that end." In addition, as a single father he did not want to raise his daughter in an environment filled with drugs, sex, and explicit language.  But after nearly eight years apart from the band, Welch says God told him to reunite with the band; he had a mission field he could sow into. He resisted, not wanting to return to the environment that fueled his depraved life. But he knew his victory was in Christ and there was no doubt that this mission field abounded with opportunities to bring lost sheep into the fold.
The bottom line is this: Does this style of the Gospel Message of the Kingdom offend mainstream Christianity? You bet it does! But isn't this picture similar to the reaction of the Pharisees, who objected to Jesus's style and message because it didn't align with their image of what religion was supposed to look like? Wasn't Jesus's method of showing the Father to the masses just as radical as using a heavy-metal band to present Him to those who would otherwise never hear of Him? Remember, the Bible tells us we are not to judge a Believer's heart, but we can judge their fruit for the Kingdom. And those band members are producing fruit among those fans that you and I could never reach.
So, remember how my day started, with the emotion of the song "The Reckless Love of God"? Well, those lyrics haunted me all day, and I found myself singing them over and over in my mind... Oh, the overwhelming, never-ending, reckless love of God. Oh, it chases me down, fights til I'm found, leaves the ninety-nine... Just like the Parable of the Lost Lamb in Luke 15, aren't these heavy metal lovers just like the lost lamb that Jesus would leave the ninety-nine Church-goers to chase down and fight for?
But let me let Cory Asbury, the writer of "The Reckless Love of God" explain it better than me. In his own words he wrote, "When I used the phrase, 'the reckless love of God,' when we say it, we're not saying that God Himself is reckless, He's not crazy. We are, however, saying that the way He loves, is in many regards, quite so. But what I mean is this: He's utterly unconcerned with the consequences of His own actions with regard to His own safety, comfort and well-being. ... He doesn't wonder what He'll gain or lose by putting Himself on the line, He simply puts Himself out there on the off-chance that you and I might look back at Him and give Him that love in return. His love leaves the ninety nine to find the one every time, and to many practical adults that's a foolish concept. Well, what if He loses the ninety nine in finding the one, right? What if, finding that one lost sheep is and always will be supremely important"? 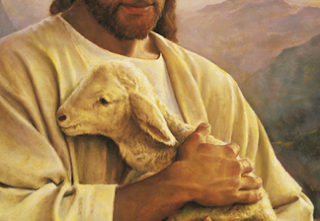 Now, let's let Jesus express Himself: “There once was a shepherd with a hundred lambs, but one of his lambs wandered away and was lost. So the shepherd left the ninety-nine lambs out in the open field and searched in the wilderness for that one lost lamb. He didn’t stop until he finally found it. With exuberant joy he raised it up and placed it on his shoulders, carrying it back with cheerful delight! Returning home, he called all his friends and neighbors together and said, ‘Let’s have a party! Come and celebrate with me the return of my lost lamb. It wandered away, but I found it and brought it home.’”
Jesus continued, “In the same way, there will be a glorious celebration in heaven over the rescue of one lost sinner who repents, comes back home, and returns to the fold—more so than for all the righteous people who never strayed away.”
Can you see Him celebrating each and every heavy metal fan that turns from the dark side of that music genre to run to His arms? Have they wandered away? Yes. Does He want to work with us to find them and bring them home? Absolutely! And He has a willing partner with Brian Welch. Praise Him for not abandoning them and for sending Welch into their midst. Let us rejoice, for there is a glorious celebration in heaven!
So, there it is.... God speaking to me in a day that started with a song, which led to a movie, which led me back to Scripture, which ended up back at the song ... Oh, the overwhelming, never-ending, reckless love of God. Oh, it chases me down, fights til I'm found, leaves the ninety-nine... A perfect circle of His love. He never stops pursuing the one who is lost.
Father, may I never judge the methods and the ways You use to reach the lost lambs of this world. Instead let me lift up those in the Body of Christ who are reaching souls I could never influence, and may we learn to love our differences as we praise You for bringing us to unity in our shared faith. You've created us to walk in different lanes and paths, but all with the shared goal to reach the world for You. You paid it all for each and every one of us. Was that reckless in that You had no concern for what it would cost You, but were only devoted to what we would gain? Yes! And on behalf of all the "one lambs" You came after, I bow before You!

James 5:19-20   Finally, as members of God’s beloved family, we must go after the one who wanders from the truth and bring him back. For the one who restores the sinning believer back to God from the error of his way, gives back to his soul life from the dead, and covers over countless sins by their demonstration of love!