There are some days that I just have to devote to shouting the praises of Jesus! Today is such a day. As I am becoming more and more aware of the demarcation line between me and Christians who do not perceive Kingdom living the same as Mark and I, the greater measure of the Presence of God I find in my life.
I want to make it clear that I do not see myself as elevated in stature above my fellow believers, by any means! I am being trained to become a co-heir with Christ and I have a lot of carnal issues I need to conquer. And God is making sure I am aware of these areas of the flesh that must be subdued and surrendered, because He is bringing them front and center every day. But with this awareness comes repentance and forgiveness as I discern that I am being prepared to reign with Christ!
As a Daughter-of-the-King-in-training, I find my daily living becoming more about serving God in the ways of Jesus, than about what makes a successful life in this world. Mark and I are spending less time in meeting the cares of this life, and finding ourselves involved in Kingdom responsibilities. And let me tell you, Kingdom is way more rewarding than the natural world. We find ourselves laughing these days, because it doesn't do any good for us to plan our week around our business or social life, because it is increasingly becoming monopolized by meeting the demands of the Kingdom. And we couldn't be happier or more fulfilled! 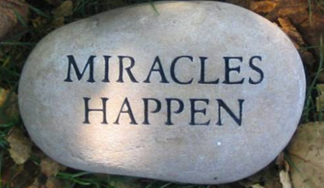 Psalm 77:14    You are the [awesome] God who works [powerful] wonders; You have demonstrated Your power among the people.

Email ThisBlogThis!Share to TwitterShare to FacebookShare to Pinterest
Labels: Miracles, The Kingdom of God