The Power of Intercessory Prayer

Yesterday, Mark and I drove three hours to lead a teaching on the Power and Authority of the Believer and how that intersects with Kingdom living. But it quickly became clear to us that the focus of our day was going to be on intercessory prayer. During that three hour drive, we received three different phone calls in which we heard impassioned pleas for counsel and prayer over situations that are dominating the lives of good and faithful people. As I look back on those conversations, my spirit recognizes what a privilege it is to be able to come together to pray with people who trust our hearts to go with them before God, pleading their case and asking for justice and mercy.
Each of these three calls were unique and separate in their needs, but all dealt with life-changing circumstances that the Enemy is using to keep these people in states of fear, anger, resentment, and confusion... all spiritual conditions that keep one from experiencing the joy and peace of their relationship with the Lord. And all this took place before we met with the group we were teaching! They also had needs to be prayed for -- a serious health condition for a grandchild; a life-long battle over a child's salvation; pending neck surgery; and a failed business opportunity.  At the end of the day, it was apparent how important intercessory prayer is in the Body of Christ. 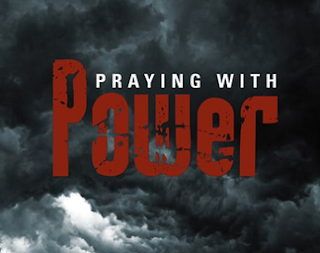 But what is intercessory prayer and what should it look like? Timothy 2:1-2 (in the Amplified Version) urges that "petitions (specific requests), prayers, intercessions (prayers for others) and thanksgivings be offered on behalf of all people ... so that we may live a peaceful and quiet life in all godliness and dignity." For myself, I prefer the Passion Translation of this same verse: "Most of all, I’m writing to encourage you to pray with gratitude to God. Pray for all men with all forms of prayers and requests as you intercede with intense passion... so that we would be able to live tranquil, undisturbed lives, as we worship the awe-inspiring God with pure hearts".  Furthermore, both versions make it very clear that it pleases God when we pray for each other, because it brings us into a relationship with Jesus, and an understanding of Him as our mediator; our intercessor.  And since we are to follow His example, and to "grow up in every way into Him", this truth should direct us to become powerful intercessors.
I like that picture of praying with passion, which to me, indicates the release of emotion and energy; an outburst of intense desire. But when you combine prayer with passion, can you conceive a release of God's power into whatever situation you are praying about? That's how I see it, but I have to tell you that I have a dilemma when it comes to how we Christians pray in intercession for others.
Will God release His power (the Holy Spirit) into our circumstances if we don't believe that we have the right [as co-heirs with Christ] to ask for the power? Not Can God, but Will God release His power? And how effective are our intercessory prayers if we don't recognize that His power is in us to see His good, and perfect, and acceptable will done in the situation? Are we praying from a position of power and boldness, or are we imploring God to solve our problems for us?
I can't help but look back to the Church in the Book of Acts. It was small by today's standards, but look at the power of their prayers! The body of Christians that formed that early Church was feeling the persecution by their own religious leaders, and Peter and John had been arrested and warned not to preach in the name of Jesus again. But that body of believers joined in intercessory prayer for the fledgling Church, that it might grow in faith and influence.
So, how did they pray? Firstly, they prayed as one, in unity. Then they prayed boldly, asking God to "empower" them as His servants, to speak His Word freely and courageously. They also asked God to "stretch out His hand of power through them to heal, and to move in signs and wonders by the name of His Holy Son, Jesus"! They didn't ask God to do it for them. They prayed that He would empower them so they could be courageous enough to declare His will, and to use His power flowing through them to move in miracles, effectively shining His Light into the world's darkness.
What was the effect of this powerful intercessory prayer? Acts 4:31 says, At that moment the earth shook beneath them, causing the building they were in to tremble. Each one of them was filled with the Holy Spirit, and they proclaimed the word of God with unrestrained boldness.  Do we see the same kind of response when we pray as intercessors? Do our prayers cause earthquakes? Shouldn't they?
Remember, the established Church is new at this point in history and although I couldn't find exact numbers, membership of the entire Church would be in the range of 5,000 or so. And this event could be just a small segment of believers gathering in a building. My point is that whatever the numbers were, it is only a fraction of the number of believers in the Body of Christ in America today. Imagine what it would be like if we all prayed in harmony and unity for God to let His power flow through us to effect change in our communities; in our nation; in the world? There would be no abortion; no drug or sex trafficking; no child molestation; no murder; no poverty; no hunger --- the list goes on.
But guess what? It isn't really about the numbers game, either. You or me, praying from our lone position of power and authority, partnering with God, can cause buildings to tremble and the ground to shake. THAT's called spiritual warfare! It can be the source of spiritual breakthrough in any situation. Because God will act -- whether one person, or tens of thousands are praying; He just needs us to pray from our heart [where the Holy Spirit is guiding our prayer] and to pray persistently, with faith that knows the power comes from God and that He loves the people we are praying for.
The bottom line is that I believe God wants us to join with each other in prayer AND join with Jesus and the Holy Spirit, as they intercede for us. We need to join our spirits together in persistent prayer until, like the persistent friend who shows up at midnight in Luke 11, asking for food, we finally get what we are asking for. Or be like the persistent widow who keeps asking the unjust judge for justice until he finally grants her demand. But we don't face that same kind of opposition. We are grateful that we serve a loving and merciful God with a Character that desires to give His beloved what they persistently ask for. That is the principle at the heart of intercessory prayer. Let us shake this earth with passionate prayer that sees the power of God unfold before our eyes! May the Spirit of the Church in the Book of Acts invade the Body of Christ once again!

Ephesians 6:18     "Pray passionately in the Spirit, as you constantly intercede with every form of prayer at all times. Pray the blessings of God upon all His believers".

Email ThisBlogThis!Share to TwitterShare to FacebookShare to Pinterest
Labels: Prayer