It is extremely exciting for me to see more and more Christians celebrating the Passover Feast. That wasn't the case when my heart was first awakened to the seven appointed feasts of the Lord over five years ago.
It was then that Mark and I decided to begin a deep study on how Scripture said they applied to us, as Christians. When speaking of the Feasts, the Lord said, "Now this day will be a memorial to you, and you shall keep it as a feast to the Lord; throughout your generations you are to celebrate it as an ordinance forever". It quickly became apparent that all of the seven feasts pointed not only to the historical experiences of the nation of Israel, but to those who called themselves "the children of Abraham". Since Abraham is the father of our faith, too, then these Feasts of the Lord must also have great significance for us.
As we approach the first of the Feasts, I would like to share a basic understanding of Passover and why it has such special meaning to both the Jewish and Christian faiths. In Leviticus 23, God commands Moses to tell the children of Israel, "The feasts of the Lord, which you shall proclaim to be holy convocations, these are My feasts... to be proclaimed at their appointed times... and to be followed by all generations."  Since we have been adopted and grafted into His chosen people, we are also the children of Israel.  I am encouraged that so many Christians are now seeing the picture that these feasts show us of our Lord and Savior, Jesus Christ, and are agreeing to approach these sacred times as humble seekers of God's revelations.

We know that this approaching Passover "season" and the feasts of Pesach, Unleavened Bread and First Fruits have all been incorporated into the celebration of Passover, and reference to Passover means all three of these feasts.  In 2018, Passover will be celebrated from sundown Friday, March 30th, to sundown on Saturday, April 7th. If you are celebrating as a church or a small gathering, I pray that God will recognize your desire to please Him in this effort and that He will bless your assembly. 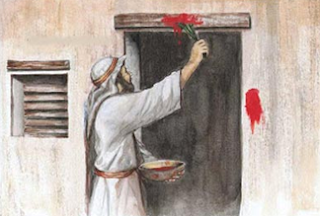 We all know the Passover story from the Sixth chapter of Exodus.  We know the story of the Lord sending Moses to lead the children of Israel from Egypt to the Promised Land, and we know that Pharaoh refused to let them go.  After sending the nine plagues that did not touch Pharaoh’s heart, the Lord said the firstborn males of every house would die unless the door frame of that house was covered with the blood of a perfect lamb.  That night the Lord “passed over” those homes that were covered with the blood of the lamb, and Pharaoh, losing his own son, let the people of Israel go.  Passover was to be a lasting ordinance (and memorial) for generations to come.

The Passover Seder meal commemorates the Israelite’s deliverance from slavery in Egypt nearly 3500 years ago..  Jesus honored the Passover while on earth, and I believe that it was at this Seder meal that He spoke the words in today's closing verse.  But what significance does it have for us?  First, we have to understand the significance of what was served at this Seder and why Jesus wanted to experience this meal with His disciples.
First, there must be served a perfect lamb, without blemish.  It must be sacrificed and served in remembrance of the blood of the lamb that allowed them to leave Egypt.  You may be aware that Egypt has always symbolized bondage and slavery to sin.   During this very Seder meal, Jesus reveals that He is the Sacrificial Lamb that delivers us from the bondage of sin.
The only type of bread eaten during the eight days of Passover was unleavened bread or Matzah.  It was made with flour and water only, no leaven or yeast, in remembrance of their hasty departure from Egypt.  They had to have a form of sustenance that would last and not spoil.  They were specifically instructed that the bread was to be striped and pierced during baking.  This is a picture that should remind us that Jesus was striped (scourged) and pierced for us; and that He is the "living bread from Heaven."
Also, in the Jewish Seder, there is a ritual in which the matzah or unleavened bread is broken, hidden, found, bought for a price, and then eaten to end the meal.  This is not only a picture of the Jewish experience during their captivity in Egypt and their Exodus ... read the actions again that are taken with the bread ... but Jesus is also telling His disciples (and us), "I was broken, hidden, found, bought for a price."  When he breaks the unleavened bread in Luke 22:19, and says, "“This is My body which is given for you; do this in remembrance of Me", He is saying "I did that for you, and I am the only sustenance you need." 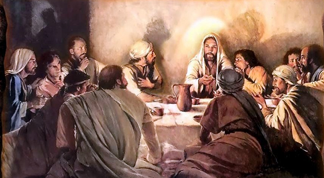 The Passover meal also included bitter herbs, so that the Jews would remember the harshness and bitterness of slavery, so that their freedom (symbolically, from sin) would taste sweeter.  Jesus wished His disciples (and us) to see that our freedom from sin is sweeter, too.  We no longer have to taste the bitterness of sin because of what He did for us on the cross.  But the presence of the bitter herbs at the Passover meal should be a reminder of the temptation of sin.  It is real and distasteful.
Finally, the Passover meal always included wine, four cups to be exact, in remembrance of the redemption from Egypt (Exodus 6:6-8) in which God told the Israelites, ""I will lead you forth... I will deliver you... I will ransom you... I will take you to Me....".

In this particular Passover Seder, Luke 22:20 reveals that "Likewise He also took the cup after supper (The Third Cup), saying, “This cup is the new covenant in My blood, which is shed for you."  This cup of wine was to be drunk in remembrance of that third part of the covenant God made with them when He brought them out of Israel ... I will ransom you.   Jesus is showing them (and us) that yes, God ransomed them from Egypt and the Pharaoh; but now He, Jesus, is the new covenant that ransoms. His blood ransoms us, and He says it right there in the Scripture!
So the Passover Seder, which had been observed for nearly a century and a half, and religiously observed by Jesus, who was a Jew, is a picture of the Lord's Supper that night in the upper room before His crucifixion, burial, and resurrection a few days later.  The celebration of the Feast of First Fruits completes the picture.
The Lord instructed the Israelites on how to conduct the Feast of First Fruits: the people offered the first ripe sheaf (their first fruit) of barley to the Lord as an act of dedicating the harvest to Him.  On Passover, a marked sheaf of grain was bundled and left standing in the field.  On the next day, the first day of Unleavened Bread, the sheaf was cut and prepared for the offering on the third day.

On this third day, which was the actual Feast day, the priest waved the sheaf before the Lord.  They then began counting 50 days until Pentecost, which is the next feast to be celebrated.
It is easy to see the picture of Jesus in the Feast of First Fruits.  It is a picture of Jesus’s resurrection, which Christians celebrate as Easter, (with all of its Constantine influences).  His resurrection is the first fruit of God’s redemption of mankind …. and we see a picture of “things to come” … the harvest and promise of the future resurrection of believers.
So we now have the historical significance of the Passover Seder.  We have the meaning behind Pesach and the Exodus; we know the significance of the unleavened bread and the first fruits of the harvest.  We see the picture of what God did for the Israelites, and what Christ has done for us, in the Seder Meal and what is eaten.  And we see the picture of His death and resurrection in that somber assembly at the Last (Passover) Supper.  And most importantly, I hope we see that we are called to observe these Feasts by our Lord, in remembrance of what He has done for those He calls His own, both Jewish and Christian.   Jesus may have instituted the Lord's Supper from rituals of the Passover Seder, but neither negates the other.  I believe that it pleases the Lord for us to be obedient to His command to observe the Feasts; to see that they point to Christ; and to worship His Son's death, burial and resurrection as the fulfillment of the promises of these Feasts.
In the spirit of praise and worship, I say "Pesach Same'ach (Happy Passover), and I hope you will be blessed by observing the first of the Lord's ordained Feasts!

Luke 22:14-16      When Jesus arrived at the upper room, He took His place at the table along with all the apostles. Then He told them, “I have longed with passion and desire to eat this Passover lamb with you before I endure my sufferings.  I promise you that the next time we eat this, we will be together in the banquet of God’s kingdom realm.”