Why We Must Bear Witness Of The Power Of God

I am increasingly aware of the importance of bearing witness of the power of God in my life -- to both the Unbeliever and the Believer.  All we have to do is look around us to see the effects of Unbelief on our culture and the world.  It seems that nearly every TV show or movie includes ungodly relationships or the occult. Even a Doritos commercial blatantly displays the symbols of Freemasonry!
It should be obvious why we need to bear witness of God's power to the Unbelieving world... it is through our witness [both in our word testimonies and our actions] that the dying world is able to see the power of God on display and His nature is revealed. Right now, they are predominantly seeing the supernatural displayed through the Dark Side -- witchcraft and the occult boldly make their presence known. But the supernatural is God's natural realm and His power is always on display there.  When we partner with Him to bring that power into this realm, it cannot be ignored. The Unbelieving world has a decision to make -- either accept or reject the reality of God and His power. 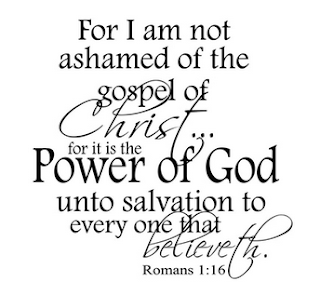 They will either respond as Pharoah and the Pharisees did -- hardening their hearts and resisting His power because it threatens their own power and the desires of their hearts of stone -- OR their hearts are changed when that supernatural power is displayed [through me] when I lay hands on them and heal a sore neck or knee; or work with Jesus to heal an emotional wound; and yes, even when, in the Name of Jesus, the spirit of fear or anger is cast at the foot of the Cross.  Either way, these actions testify of God's love for them by invading this earth with His power, and it demands a decision: belief or unbelief; acceptance or rejection.
And God always has a foundational purpose in my witness of His power: to change a person's heart and bring them into relationship with Him, resulting in their true repentance and His forgiveness. But it is also so that they see His power exhibited, hear the "Good News" that the Kingdom of God has invaded the earth, and this power is available to them to bring others into relationship with Him. But I find that it is not only the Unbelievers that can benefit from my witness, but Believers, too.
The believing Body of Christ is just as guilty of denying God's power in this realm as the unbelieving world.  Why? Because they do not have their own testimonies. They have access to the power and authority of the Living Christ, but do not acknowledge it or exercise it. They are just like the sons of Ephraim in Psalm 78: Though they were all equipped warriors, each with weapons, when the battle began they retreated and ran away in fear. They didn’t really believe the promises of God; they refused to trust Him and move forward in faith. They forgot His wonderful works and the miracles of the past...

Because the modern Church has abandoned the prophetic promise Jesus made in Matthew 11, they don't have testimonies to lean on. What promise was that? In Matthew 11:20-24, Jesus gives a prophetic promise and warning:
Then Jesus began to openly denounce the cities where he had done most of his mighty miracles, because the people failed to turn away from sin and return to God. He said, “How tragic it will be for the city of Chorazin! And how horrible for the city of Bethsaida! For if the powerful miracles that I performed in Chorazin and Bethsaida had been done in Tyre and Sidon, they would have humbled themselves and repented, and turned from their sins. Tyre and Sidon will be better off on judgment day than you.  And Capernaum—do you really think you’ll be exalted because of the great miracles I have done there? No! You’ll be brought down to the depths of hell because of your rejection of me. For if the miracles I worked in your streets were done in Sodom, it would still be standing today! But I tell you, it will be more bearable for the region of Sodom in the day of judgment than it will be for you.”
Jesus declares that the cities of Chorazin and Bethsaida and Capernaum saw more signs and wonders and miracles than all the rest combined. Jesus was limited with what He could do in Nazareth because of their unbelief (Matthew 13:58), but these were cities that must have responded to His power and had a measure of faith because He demonstrated God’s power so many times through countless miracles there. He even says that Capernaum is exalted to Heaven because miracles were done and they believed it was the power of God. They had testimonies -- but they did not act on them!
The result? Jesus says to these cities who had seen and believed in the miracles, You’ll be brought down to the depths of hell because of your rejection of me. Why the scathing judgment? They believed in the power they had seen, right? They believed in the miracles, but they did not repent. They had seen His power and believed, but it did not change the perspective on their lives – their belief did not make His activities (healing, casting out demons, etc) the focus and ambition of their lives. When we see that kind of power and the revelation that Jesus wants us to continue His work – and we believe, but don’t act upon it – then it’s just religion and we never really change ourselves -- or others.
I have personally seen this myself. Years ago, Mark and I were members of a large congregation who had a successful ministry called Mobile Loaves and Fishes. We would load up vans with food, clothing, and necessities and deliver them to the homeless throughout our big metropolitan city. The Church, and those who volunteered to serve the homeless, were sincere in