Understanding Satan's Role In The World

Mark and I recently had the opportunity to visit with a Christian couple whom we dearly love, and with whom we identify as faithful Believers. We don't get to see them very often so when we get together, and after we have caught up on the superficial affairs of our lives, we always end up spending most of our time in deep discussion about the theological premises that guide our faith. We don't agree on everything and that is okay. We recognize that each other loves the Lord and all of our hearts are focused on relationship with Jesus.
That being said, our foundation of Kingdom living is a new concept for most Christians we come in contact with. The truth that the dominion God gave man over the earth was given away to Satan [by Adam and Eve in the Garden] -- and the consequences of that fatal mistake -- often go unrecognized by modern-day Christians. Understandably, in this fast-paced world we live in, with all of its distractions, the ramifications of that long-ago sin often get lost in the faith identity we construct for ourselves. We Christians tend to identify more with God's nature of love, mercy, grace, and peace. But there is more to His nature, and we should be aware of how we are called to walk in a greater identity. 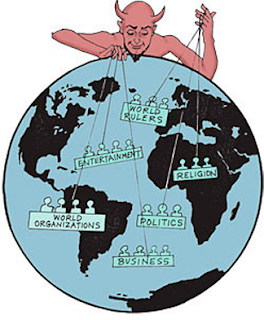 For instance, during our discussion with this couple, the wife was clearly disturbed when I made the comment that because our dominion was sacrificed for the fruit of the tree of knowledge of good and evil, "Satan is god of this world".  Her response was, "How can you say that?" (clearly feeling as if I was demoting God. I could tell my statement was offensive to her). My response was, "Because the Bible tells us so". Our discussion continued with the citation of Scripture that pointed out this truth (2 Corinthians 4:4) and the additional one that calls him "the ruler of this world" (John 12:31). It was important that she understood these titles were in reference to unbelievers. Those who believe in Jesus Christ as their Savior recognize the One True God. BUT, it is important for Christians to recognize the fact that the devil is the god of this world, and it made me question how many Christians don't recognize the major influence that he has in the everyday lives of the world's population?
His influence can be see in political opinions and policies (abortion; gay marriage; government-instituted welfare); education (teaching of ungodly sexual lifestyles; prayer in schools banned; acceptance of other religions while limiting Christian values); our goals and ideals (getting rich and living like Hollywood/Rock stars versus seeking to live a righteous life according to God's standards) ... everything from our thoughts to our entertainment to what we value as human beings are influenced by the devil's lies and deception.  He rules over what is presented and promoted in this world, and it is up to each human being if they wish to follow him, or accept the invitation of their Creator.
But there is an extra component to the devil's ability to rule that we need to contemplate.  Satan may be "the god of this world; the ruler of this world, and the prince of the power of the air", but he does not completely rule the world.  There is the factor of God's sovereignty.  And this is another concept in which I probably differ from most Christians. God's "sovereignty" is His dominion, His rule over what He has created.  I do not believe that it means He controls everything He has created.
God is a god of order, and He has set rules and boundaries for His creation. And remember God created Satan, too. So within His Sovereignty and Dominion, He allows Satan to operate in this world within the boundaries He has set. If it makes it easier to understand, then picture, if you can, that God has Satan on a leash; there are boundaries beyond which he cannot act. And those boundaries extend only to unbelievers in Satan's Kingdom of Darkness on earth. But when, as inhabitants of this earth, we accept Christ, we are given a new nature; are seated with Him in the heavenly realms; and we now operate under the rules of God's Kingdom of Light, which Jesus inaugurated and brought with Him when He walked this earth. We are no longer under the rule of Satan, but until Jesus returns and defeats evil, Satan still rules the rest of the world and we are behind enemy lines.
This does not mean that we concede God's authority to Satan while we still live here. But it does mean that as sons and daughters of God and representatives of His Kingdom on earth, it is our responsibility to spread the truth of that Kingdom and work with the Holy Spirit [in us] to help set captives free from this domain of darkness and take back dominion of the earth for God. This dominion cannot and will not be completely restored until Jesus comes back to defeat the Enemy once and for all. But we must come to the conclusion that there is more to our duties as Christians than to speak only of God's Love and Grace.  YES, they are part of His nature and we are to extend that to all people.  Jesus showed us that!  But He showed us so much more in this battle we are engaged in with the god of this world. 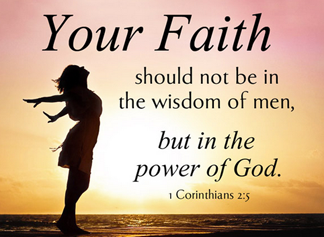 He showed us that disease, deceptive and demonic spirits, and death are all weapons of our adversary. And He showed us that with our new nature [empowered by the Holy Spirit] we can defeat the Enemy [just like He did] by using that Heaven-sent power to heal those the devil has afflicted; bind the deceptive voices of demons and cast them at the foot of the Cross for Jesus to deal with; and, as impossible as it sounds, even bring someone back to life whom the devil has conquered through death.  It is all part of God's sovereign rule that He transfers the same power He gave to Jesus to us, so that He can continue His battle plan to restore dominion of the earth to His Kingdom.
God wanted to work with Adam and Eve to establish His Kingdom here on earth when He handed over all that He had created to them.  And He wants to work with us [who have pledged our allegiance to Him] to reclaim that dominion and once again establish His Kingdom "on earth as it is in Heaven". Until Jesus returns it is important for us Christians to take our blinders off and see this world as it truly is ... under the rule of Satan, the earth's king of Darkness. And we must see the role we are to play, beyond telling others of God's amazing Love, Mercy and Grace. That's a start -- showing unbelievers Who it is that we serve and obey.
But we have another role, too, and that is as warriors. There is a spiritual battle to be won, and we must see our role as God sees it -- to begin to use the power He has given us to defeat the wiles of the devil (sickness, demons, death).  Until we can do that, there are too many people still suffering and in captivity to these very schemes that keep them in darkness. Why not go that extra step? After telling someone about how much God and Jesus love them, why not show them the power of that love by healing them, or setting them free from the spirit of fear or anger? That's what Jesus did -- and because He did, we now believe.
It was the testimony of those He healed and set free, and the testimonies of those His followers healed and set free, that brought freedom to people around the world, and Christianity flourished. I just don't understand how we, as 21st-Century Christians, can say we believe the Bible and believe those accounts, but because we haven't been taught them or practice them, they no longer have any validity.  How can we say we know better than the Early Church disciples [who learned directly from Jesus]? It just seems to me this is another lie and deception from Satan, and it serves his purposes. As long as we deny our power and that role, he will continue to keep people in bondage -- even Christians.  We must step into our true and complete identity. We are to be images of Christ; ALL that He was -- a representative of God's Love as well as Satan's major opponent in the battle for men's souls. Love and Conquer is our motto!

2 Corinthians 10:3-4   For although we live in the natural realm, we don't wage a military campaign employing human weapons. Instead, our [spiritual] weapons are energized with divine power to effectively dismantle [demonic] strongholds.