I recall so many New Year's sermons from the pulpit titled "You Can Begin Again", all preaching the truth that we serve a God of new beginnings.  And I don't want to repeat this message in a trite manner but rather, the purpose of this post is to exhort us all to step into new identities in 2018.
As Bill Johnson says, the new year is really "the nature of the Christian life.  We are born again; given a new beginning". We are all familiar with God's nature of Grace, giving us second chances when we repent and turn towards Him. But how many of us are stuck in our pasts and can't move forward into that new beginning and new identity?
That is what I hope to address today.  Because, you see, the one thing that I really want you to understand is the truth of Lamentations 3:22-23, which says,  It is because of the Lord’s lovingkindnesses [mercies] that we are not consumed, because His [tender] compassions never fail. They are new every morning; Great and beyond measure is Your faithfulness. This is the word of God telling us that each morning is a new day with Him; a new start and a new beginning to make progress towards a life that abides wholly in Him.
It is important for us to understand that "abiding in God" gives us, not only a promise of restoration from captivity by the Enemy, but of remaining in the presence of God, Himself.  That means that we must stop looking back at past failures and past disappointments. We must have faith that God can help us develop new attitudes, new goals, and new hearts. But that means we must believe it is possible to begin again, and become a new person in Christ. 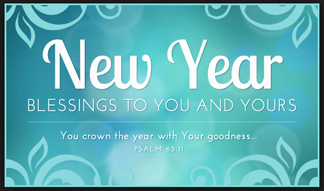 I know that there are many people who are beginning 2018 with a lot of pain.  Whether it be failing health, failing marriages, or failing hope, it just seems that others [or God] have let them down. And there are those of you who are disappointed in yourselves, thinking that there is no future or way to move forward in your goals, including your relationship with God.  But that is NOT what the Word says!
The Bible says in Lamentations that we have access to the Lord's mercy and compassion and faithfulness towards us. Whose fault is it if we don't take advantage of that, or walk in faith towards that truth?  I will admit that we fight a spiritual battle against an enemy that seeks to steal, kill, or destroy our hope, joy, and faith. But we have been given spiritual armor to effectively fight that battle. And as I've heard more than one pastor point out, there's not a piece of that armor that is positioned on our back -- it is all for our forward progress!  Looking back at our past mistakes and failures only serves to keep us from the new beginning and identity God wants to give us!
The Reverend Tony Cooke writes on his website about historical men who serve as our example for moving forward from past mistakes and failures.  Let me share a few...
Abraham Lincoln's mother died when he was nine years of age. At 23, he invested in a small store. Three years later his business partner died, leaving him in debt for years to come. At 37, on his third try, he was finally elected to Congress. He ran again two years later but wasn’t re-elected. Two years later he was rejected for Land Officer. At 45, he ran for Senate and lost. Two years later, he lost the nomination for vice president. At 49, he ran for Senate again…and lost again. At 51 he was finally elected president of the United States, but with only 40 percent of the popular vote. Yet I believe God used him to keep our nation from destroying itself.
Moses' initial try to convince his brethren that God would deliver them from Egyptian bondage failed, and he spent 40 years in exile before he believed more in God's new offer of mercy [and guidance] than in his own past mistakes. He was willing to believe that God's compassion for the Israelites would never fail, and that a new day of freedom was available and waiting for them.
There is no one in the Bible that I can think of who had more reason to regret his past mistakes than Peter.  He professed his eternal allegiance to Jesus, yet rejected Him three times in His hour of need.  But we must not forget that Jesus knew Peter would fail Him, but He loved Peter; saved him; and called him to His service anyway.  Do you not think that He will do the same for you?
These are only a few examples of men who rose above their past mistakes to walk in new beginnings. They didn't let their failures in life keep them stuck in place, or focused on the past, or hinder them from walking into a new identity.  Abraham Lincoln could have embraced an identify of failed businessman and politician. Moses could have hidden out in Midian, having lost his exalted title and position in Egypt, and never have been heard from again. Peter could have spent the rest of his years in disgrace and shame and guilt for having abandoned his Master.  But each of these men answered a call upon their lives and were renewed, restored, and regenerated.  They were each given a new and higher spiritual nature and identity.
That is what God wants for you!  I urge you to look upon this new year with expectation and a desire for a new and greater identity. Stop listening to the lies that the Enemy is telling you, and start this new year by declaring that you are a new creation; that God is doing a new thing in you; that you have a renewed spirit, mind, and heart; that you are forgetting what lies behind and straining forward to what lies ahead, pressing on toward the goal for the prize of the upward call of God in Christ Jesus... and finally, that our God is a god of Creation, not of destruction or disappointment. This new year is full of opportunities for you! Reach for them, accept them, and walk in them. And trust in God's faithfulness to grow you! Happy New Year!

Ephesians 4:20-24    "But that is not the way you learned Christ!— assuming that you have heard about Him and were taught in Him, as the truth is in Jesus, to put off your old self, which belongs to your former manner of life and is corrupt through deceitful desires, and to be renewed in the spirit of your minds, and to put on the new self, created after the likeness of God in true righteousness and holiness".