I was going to continue yesterday's blog on Prayer with a post on how the Holy Spirit has recently moved in my life. But a text message from a concerned Christian friend has me taking a slight detour. I will continue with my testimony on Friday, but I wanted to address this question, because it is of primary consideration over the next few weeks.  So, here is the question: Is "trunk or treat" a God-honoring alternative to Halloween? Here is my answer and some important facts you need to know...

One can go online to search out whether Halloween is an acceptable holiday for Christians, or if it is really an evil day, celebrated by Satanists and occultists.  For each site you visit, I suspect you will find a different answer.

There will be those sites who declare it to be a benign evening of "tricks and treats" for the youngsters, while others will warn of its demonic undertones.  There will be attempts to "Christianize" the holiday by offering Trunk-or-Treat events (popular among churches) to bring Halloween to parking lots where kids go from car to car and get candy.  There will be countless Fall Festivals innocently celebrated, and there will be people who simply don't care, accurately saying that all holidays have pagan roots and it is what you make of it today that matters.
And that's exactly why we should care about this controversial holiday.  Whether a devout Christian or a non-religious secularist, most people believe that Halloween is a night of candy and costumes and autumn celebrations/festivals that ALL people can share.  But what about the satanists and witches?  Shouldn't we care what it is to them?
Known as "Samhein" to this latter group, Halloween is a transitional time, and an initial stage of a process in which the veil between life and death grows thin.  I found a Christian website (Logos Resource Pages) that featured an article by Pastor David Phillips that seemed to offer some straightforward information on the holiday.  Consider what the following self-declared witches had to say about the holiday... "Halloween is one of the four Great Sabbats of the witches that everyone has heard about. To witches, Halloween is a serious occasion, however merrily celebrated. It is the old Celtic Eve of Samhain. With the coming of Christianity, the Church tried to Christianize the old festival by naming November 1st as All Saints Day, or All Hallows as the old term was. Thus Samhain Eve became All Hallows Eve, or Halloween. But attempts to discourage the pagan celebrations were so unavailing that the festival was eventually banned from the Church calendar. It was not until 1928 that the Church of England formally restored All Hallows to its calendar, on the assumption that the old pagan associations of Halloween were at last really dead and forgotten; a supposition that was certainly premature." 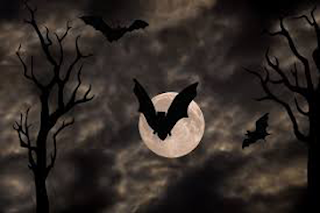 Another witch's testimony:  "All the Great Festivals of Paganism, wherever they may be found, correspond in common with the Solstices, Equinoxes, and other natural annual cycles of life. Most of these remain with us today, in more or less disguised form, as the so-called Christian holidays of Christmas (Yule), Easter (Ostara), May Day (Beltane), Thanksgiving (Harvest Home), Halloween (Samhain) and even Groundhogs day (Oimelc)."
Still, another confirmation of Halloween's importance to occultists:  "Salem (Massachusetts) is a mecca, especially around Samhain. It is our holiday, our new year, and a lot of witches come here from all over the world".
And if that's not enough confirmation for you that everyone should avoid the celebration of Halloween, let me give you the cold hard facts of their official "holy days":
December 21st (Yule, or the Winter Solstice);
February 1st (Candlemas, also Groundhog's Day; a Illuminati Human Sacrifice night);
March 21st (homage to goddess Ostara; Human Sacrifice Night);
May 1st (Beltaine Festival, also called Walpurgis Night. This is the highest day on the Druidic Witch's Calendar. May 1st is the Illuminati's second most sacred holiday. Human sacrifice is required);
June 21st (Summer Solstice; Litha is one of the Illuminati's Human Sacrifice Nights);
August 1st (Lughnasa, Great Sabbat Festival; One of the Illuminati's Human Sacrifice Nights); September 24th (Autumn Equinox); and
October 31st, which is the highest and holiest night of sacrifice for the secret society of the Illuminati.
For the discerning Christian, it should be easy to see the connection between ancient paganism and the modern customs and costumes of Halloween. Perhaps the most relevant is the goddess Hecate, the Titan Earth mother of the wizards and witches, who illustrates perhaps better than any other ancient goddess the connection between Wicca, the Celtic Halloween traditions, and the realm of evil supernaturalism. 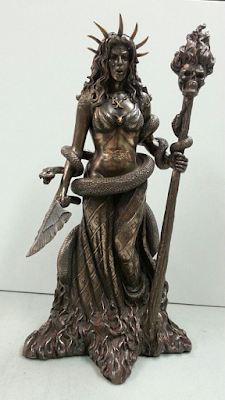 Hecate's followers sincerely believed in and feared her magic, and her presence was legendary. This was primarily due to her role as the sorceress of the afterlife.  But true believers also feared Hecate's ability to afflict the mind with madness, as well as her influence over night creatures. She was thought to govern haunted places where evil or murderous activity had occurred. Such areas where violence or lechery had a history were believed to be magnets of malevolent spirits, something like "haunted houses," and if one wanted to get along with the resident apparitions they needed to make oblations to the ruler of the darkness—Hecate.
But here's what we need to know: the Hecatian myths adopted by Celtic occultists continue in today's pop culture, symbolism and tradition in the following ways:
•  People visiting neighborhood homes on Halloween night represent the dead in search of food (the treat).
•  Masks of devils and hobgoblins represent evil spirits seeking mischief (the trick).
•  Those who pass out candy represent the homes visited by the dead, or may also represent worried individuals seeking to appease Hecate and other nighttime terrors.
•  The Jack-O-Lantern (will-o-the-wisp, fox fire, fairy fire, etc.) is, according to some histories, a wandering soul stuck between heaven and hell. Others claim the Druids left Jack-O-Lanterns on doorsteps to ward off evil spirits. Another legend concerns a drunk named Jack who made a deal with the devil. Each claims to be the true origin of the Jack-O-Lantern myth.
And in case you think this is all just a bunch of harmless folklore, I want you to consider this .... not long ago some 300 exorcists flocked to Poland for a week-long congress to examine the current fashion for Halloween-themed monsters like werewolves and vampires the world-over, and the apparent connection between this fascination and a surge in demonic possession. Is it possible that  the world is experiencing an explosion of ancient occultism combined with wicked fascination for ghosts and all things paranormal?  Those who monitor social trends now say that Halloween is the second most popular holiday, surpassed only by Christmas; itself full of pagan symbolism.
I know there are some secularists, and even Christians within the Church who will dismiss all this information as an imagination run wild.  But it is imperative that we understand that the Mass Media, including the Internet, television, film, radio, and other communications systems, have traded Bela-Lugosi-like vampires of former years and silly Abbott and Costello's Frankensteins and Mummies, (which could be vanquished with Christian symbols), for monsters of profound demonic character depicted as impervious to Christ's power. As a result, today's youth have exchanged yesterday's pigtails and pop-guns for pentagrams and blood covenants aligned with forces far stronger than former generations could have imagined.... and forces that they are ill-informed to withstand.
I think it is dangerous to dismiss these warnings that I've presented. I think that we do that at the risk of our children.  The celebration of Halloween can be an effective tool to lure them into the occult and/or to become victims of satanic rituals.  Current headlines have certainly shown us that evil and wickedness are on the rise; with more and more lurid stories of bizarre and sadistic rituals happening almost every day.  It will be interesting to see what the headlines reveal in the coming days, as to the unholy celebrations that will be taking place at the end of this month.
Obviously, it is up to you to decide what you think about this commonly accepted holiday.  But for me, I know the power that the Enemy wishes to use against us, and I will not only be on guard tonight, but will be praying for protection and authority to thwart his attacks against innocent children.  Let me leave you with these frightening words from a high priestess of the Church of Satan:  "As a child drawn to darker passions from birth, I always delighted in the fear and fantasies of Halloween. It gives even the most mundane people the opportunity to taste wickedness for one night. They have a chance to dance with the Devil, either stumbling, tittering and nervous in the arms of the Black Prince, or boldly, ravenously sharing in the sensual excesses and fright of others on this magical, unholy night. Now, birth and death have, for me, become inextricably interwoven into this day."  Parents beware!

2 Thessalonians 2:10-12   "And with all wicked deception for those who are perishing, because they refused to love the truth and so be saved. Therefore God sends them a strong delusion, so that they may believe what is false, in order that all may be condemned who did not believe the truth but had pleasure in unrighteousness."

Email ThisBlogThis!Share to TwitterShare to FacebookShare to Pinterest
Labels: Halloween, Satan's Dominion, The Occult and Witchcraft