Is It Time for Judgment of the Household of God?

Certainly, God lets us know throughout the Bible that Judgment is part of His character.  The Book of Psalms is full of descriptors of His Judgment:  It is true; it is in all the earth; He has established His throne for Judgment; and He will most assuredly execute His Judgment.
But there is another topic that surrounds this theme of "Judgment", and it can be found in both the Old and New Testaments.  In Ezekiel, Chapter 9, God shows the prophet a vision of an effectual slaughter of the people of Israel for the abominations they have committed against Him.  Ezekiel sees God commanding an angel to put a mark on the foreheads of those who mourned over the sinfulness and kept themselves apart from it.  Then come the devastating words of the Lord: Utterly slay old men, young men, maidens, little children, and women, but do not touch any man on whom is the mark; and you shall start from My sanctuary. It is quite apparent that God's Judgment is swift and terrible, and His Judgment begins with His sanctuary. 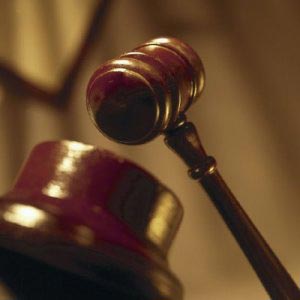 Again, in 1 Peter 4:17, the Apostle warns Believers that the time is coming when there will be Judgment on the Household of God. Many commentaries suggest that this references persecution coming against Christians.  I believe that this is a definite aspect of the Judgment, but I think it goes beyond that.  I believe that just as in Ezekiel, God will use an instrument of Judgment [on His behalf] against those who have not been obedient to Him... both Believers and Unbelievers.  But just as in Ezekiel, there will be a fiery test of the quality of one's faith.  In other words, there will be a process of judgment that leads to a decision [by God], resulting from His investigation.  Those who are sealed with the mark of true faith on their foreheads will be exempt from the Judgment.
But let me ask you a question ... are you willing to say, let it begin with me? Can you examine yourself, and know for certain, that you have been walking the narrow road, instead of the broad one?   Will Jesus recognize you when you stand before Him at the Judgment seat, or will He say He never knew you?  I must admit that I am deeply concerned for the people of our nation who call themselves Christians.  They have access to the wisdom and the knowledge of ancient Scripture, and the very words of God Himself at their fingertips -- but do they bother to take the time to get to truly know the God they say they worship?
I'm afraid that too many rely on their Pastors and Sunday School Teachers to interpret the Bible for them, and far too often those sermons and lessons are formulated from a subscription to an online clearinghouse of Bible resources.  How many congregations today are receiving the WHOLE counsel of God from pastors and teachers who not afraid to offend one or two for the sake of revealing God's Truth? It grieves me that so many churches are receiving only a small part of God, and people are ignorant of the fullness of His character and commandments.
As Mark and I dig deeper into God's Word and share the Bibles's Truths with our fellow Believers, I can't tell you how many people cry out [as we did], "Why haven't we been taught this?!? Why hasn't the Church shown us our Power and Authority? There are so many people in physical pain and spiritual torment! Why aren't we laying hands on people, and delivering people from demonic oppression and bondage???  This is what Jesus told us to do, and yet we are totally unaware we are supposed to be doing it!"
All I can say is that Satan has been working a very effective plan for hundreds of years and we are seeing the demonstration of his masterful scheme to keep us from our destiny of authority and power. When you think about it, the devil has played his hand very cunningly. By introducing false doctrine through false prophets, and infiltrating our churches with flawed theology, the Enemy has been able to keep us in ignorance of our calling as sons and daughters of the Kingdom.  And after generations of this lack of Biblical knowledge, well ... the Body of Christ is suffering and perishing.
As Dr. Charles Kraft has explained, when he attended seminary in the 1940s, his professor told the students they could skip the very short chapter on spiritual warfare since they would not ever encounter it.  Thank the Lord, that He showed Dr. Kraft that evil spirits were just as relevant today as they were when Jesus walked the earth.  And thanks to Dr. Kraft (and many other devoted men and women) for making it their life's work to help teach Christians how to walk in victory and freedom.  Because as Rob Pue writes in an article for Barbwire.com, "The writer of Hebrews tells us what REAL MEN OF GOD accomplished for their Lord, and what they endured throughout the Scriptures — and what REAL CHRISTIANS should EXPECT to endure even today: “they conquered kingdoms, administered justice, and gained what was promised; they shut the mouths of lions, quenched the fury of the flames, and escaped the edge of the sword; whose weakness was turned to strength, and who became powerful in battle and routed foreign armies…. Others were tortured, refusing to be released so that they might gain an even better resurrection. Some faced jeers and flogging, and even chains and imprisonment. They were put to death by stoning, they were sawed in two, they were killed by the sword. They went about in sheepskins and goatskins, destitute, persecuted and mistreated…”. 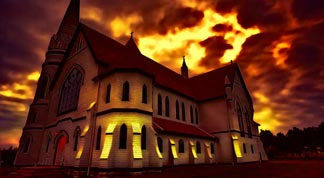 That describes the commitment that the faithful in the early Household of God exemplified.  Does it describe the Church today?  Even the "True Church", as some call those with a higher quality of faith? Because the very next question I have to ask is a pretty tough one... God is the same today as He was then, and as He will be into eternity.  Are we due any less of His Judgment than those He called His own in Ezekiel Chapter 9? It seems to me that the Israelites that Ezekiel saw in his vision were comfortable in indulging their sins and remained unrepentant and flagrantly disobedient.  Who are we, who call ourselves the Household of God today?  Are we maintaining the Holiness of His House and Sanctuary?  Or do we invite everyone in and try to make them feel comfortable and accepted in their sin, hoping that they will "get the message" one day?  After all, who are we to cast stones or judge another, right?
And why aren't we warned, as Peter warned the First Century Church, that we can expect a fiery ordeal to test us, and we can expect to suffer as Christ did. Don't you think God will judge us for dispensing only the "feel good" message with all its promises of ease and comfort and peace if we will just "turn to Jesus"?
As saddened as I am about the Judgment that I sense is going to come on the Household of God, I am tremendously encouraged at the remnant that I see rising out of the delusion and deception being heaped upon the Church. I am hearing it and seeing it across this land; faithful followers of Christ who have ears to hear and eyes to see through the dirty veil that Satan has thrown over the Church-at-large. Believers are discovering the Truths of what Jesus commanded and being consistently obedient to do the works that He did.  They are diligently learning how to heal and to minister to their fellow Christians who are tormented and oppressed by demons.  They are not afraid to exert their power and authority through the Holy Spirit to reach an unsaved person, and to set them free by the Blood of the Lamb. They are preaching a Gospel of the Kingdom message and taking back territory from the Enemy.  They are shining Jesus's Light into the Darkness of this world and into the shadows that surround the Body of Christ.
This is what revival looks like and the Lord knows we need it!  Because I don't believe it will be long before we hear an angel shout in a loud voice,  Fear God, and give Him glory, because the hour of His judgment has come. It will be swift and it will be mighty.  But I praise Him for all those seeking to come out of their ignorance and indifference.  I praise Him for the remnant that is standing up to the lies and deception that Satan has propagated upon the Church.  And I praise Him for revealing His unmitigated and pure Truth to those of us who have been wanting more of Him. I pray that more of God's Household will awaken from their slumber before that fateful day.  Because I know this for sure:  Jesus died that all might know Him and glorify the Father; that all might receive the gift of eternal life and in the Kingdom of God -- and He doesn't wish to lose a single one of them!

Email ThisBlogThis!Share to TwitterShare to FacebookShare to Pinterest
Labels: Judgment of God