As I wrote this post, AT&T cell coverage for nearly the entire state of Texas and major cities on the East Coast (including New York City and Washington, D.C.), the middle of the country (Cleveland, Detroit, rural Missouri), Southeast (Atlanta), and West Coast (San Francisco), was nonexistent for about 5 hours.  Not only were cell phones useless, but banks were unable to conduct business; grocery stores could not sell their goods; and businesses, in general, came to a grinding halt.  Those people and companies who rely on wireless cell coverage for their internet access were suddenly left unconnected with the worldwide web. I heard rumors that other major wireless carriers were also encountering problems. 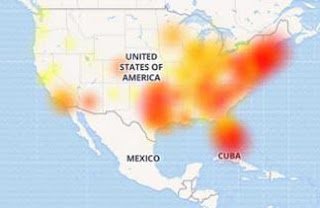 Fortunately for me, my internet access comes from a local cooperative, and I was able to write this post and see what was going on across the world. When checking AT&T's website, there were over 16,000 comments reporting that outages were either occurring now, or in some cases, had been reported for over 3 days. Funny thing is, there was no media outlet reporting this phenomenon! No crawlers running across news station feeds; no reports on major social media sites; not even a mention on the conspiracy sites.  On top of that, the Stock Market took a pretty steep dive (supposedly because of doubts that the Congressional House will pass a new health care bill) -- but was that the real reason? Regardless of all that, in interacting with people in my local area, there was a sense of underlying alarm ... what did this mean?  I witnessed people withdrawing money from their banks (those transactions being done the old-fashioned way, by hand; and gassing up their cars). I will admit that I took those same precautions; primarily because I needed to fill up my car anyway and didn't want to get in a long gas line (I still remember those of the 1980's).
Without appearing to be a fearmonger, it was not out of the question to suggest that this could be a nefarious act -- someone (or nation) attempting to disrupt the business and/or economy of this nation; or at the very least, causing confusion, an interruption in day-to-day activities, and an unsettling sense of anxiety.  So, now comes the crux of what I want to say in this post ... how secure would all this make you feel?  Are your first thoughts for your physical safety, or like me, would you have a calmness in your spirit, knowing that you are not of this world? That no matter what chaos ensues, I am secure in my spiritual safety.  I seek the shelter of Almighty God and picture myself running into a strong tower where I am protected from the disorder and pandemonium swirling outside. 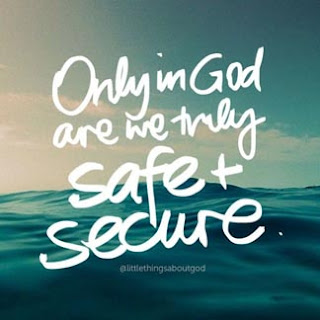 I ask these questions because we are living in an increasingly unsafe world.  Terrorism, nuclear weapons, and radical ideologies are the modern weapons of this world; weapons that man is far too familiar with.  But there is a growing wickedness and evil that are dangerous spiritual weapons against us, too.  Believe me, I am seeing that in the people God is bringing to us through our ministry.  And I will tell you that ten years ago, I never would have believed that I would be hearing from people who have experienced demons trying to convince them to end their lives; or demons identifying themselves as Lucifer during a healing/deliverance session; or heard the soul-searing pain that so many have suffered in their childhoods.
But I have also witnessed women who have seen Jesus, in their spirits, change their filthy rags into a gown of white. And I have witnessed the Holy Spirit help a hurting heart forgive the one who transgressed against them so long ago, and experienced with them, the joy of a life-long weight being lifted from their soul. I have seen soul ties broken; oaths meant to keep generations in bondage be renounced; and childhood experiences integrated into the identity of the adult, all under the compassionate authority and guardianship of Jesus.
And that is why I can approach the uncertain and unknown [that is a reality in our world today] with complete confidence and with peace in my spirit. I am aware of the dangers in this world -- those that are possible, and those that are inevitable. I read my Bible and Jesus makes it clear that if we follow Him, we will not leave this life unscathed. But if the gates of hell were opened tomorrow, I know that He is the rock upon which I would stand, making my steps secure.  My spirit will find rest in Him, knowing my faith in Him is my shield, behind which I can abide in total confidence and trust. And I feel safe, knowing His faithfulness [to me] will protect me from the fiery darts of the Enemy. His Word promises that He will fight for me, because I am precious to Him; bought with His blood! What in this world can offer any greater security?
So, the "wireless crisis" passed after several hours, with no apparent explanation. And I do not doubt that when the "time of difficulty" comes upon the earth, the chaos will cause widespread panic and fear.  That is the time that we Christians need to know where our real security lies. We need to know the Authority and the Power we will have to wield over the forces of evil, while being prepared to lay down our lives for our friends. The coming destruction will be sudden, and that's why we need to be settled in our spirits this very moment. Know that if Jesus is your Savior, you are not condemned to God's Wrath on the Day of the Lord. Jesus is your Rock, your Fortress, and your Deliverer. There is no need to fear because His Arms are everlasting, and He is a refuge and strength, and abundantly available to help in times of trouble. Any security that this world has to offer is inadequate and insufficient.

Psalm 16:8   "I have set the Lord always before me; because He is at my right hand, I shall not be shaken".