Since my focus over the past few posts has been on Divine Healing, I cannot leave the subject without considering the one question that is always at the forefront ... How are we to think about Paul's "Thorn"?  This question came up in our Home Church meeting on Healing, and continues to be a source of debate between my faithful friends.  What do we understand the thorn to be, and why wasn't Paul healed of it, are at the center of our discussion.
First, we need to take a look at the Scripture which has drawn our attention:

2 Corinthians 12:7-10
7 So to keep me from becoming conceited because of the surpassing greatness of the revelations, a thorn was given me in the flesh, a messenger of Satan to harass me, to keep me from becoming conceited.
8 Three times I pleaded with the Lord about this, that it should leave me.
9 But He said to me, “My grace is sufficient for you, for My power is made perfect in weakness.” Therefore I will boast all the more gladly of my weaknesses, so that the power of Christ may rest upon me.
10 For the sake of Christ, then, I am content with weaknesses, insults, hardships, persecutions, and calamities. For when I am weak, then I am strong. 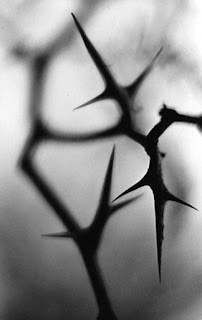 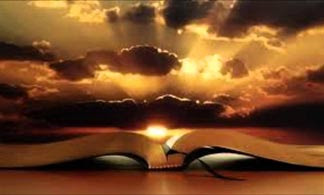 But let me give you an alternative view. What if your view of God is that He is not in control of everything?  What if you look at this passage in the context of the Authority and Power given to us by God?  What if God is saying that each us has a choice [through our free will].  We can accept the attacks (thorns) of Satan and endure them for the sake of our testimony that it has strengthened our faith that Christ has the power to uphold us during our suffering ... in that case His Grace will be sufficient and enough to get us through those events.
OR, might we have another choice? I present to you [for your consideration] the Greek translation of 2 Corinthians 12:9-10 ... And He said to me, and His declaration still stands, My grace is enough for you, for power is moment by moment, coming to its full energy and complete operation in the sphere of weakness.  Therefore, most gladly will I rather boast in my weaknesses in order that the power of the Christ [like the Shekinah Glory in the Holy of Holies of the Tent of Meeting] may take up its residence in me [working within me and giving me help].  Therefore I am well content in weaknesses, in insults, in necessities, in persecutions, and in circumstances under which I am subject to extreme pressure on behalf of Christ. for when I am weak, then I am filled with ability and power.
In full disclosure, my view of God has changed and grown exponentially through the ministry He has called me and husband to do on behalf of His Kingdom.  But I am not saying that my view of this passage is the correct one.  I am merely sharing what my spirit is telling me is a possible interpretation.  Since I definitely believe that we have been given Authority by Christ to use His Power [that comes from God] to heal the afflicted, that authority and power also extends to healing ourselves.  This is where my view of God comes into play.
What if God is saying this: Paul, you have been given free will to deal with this thorn yourself.  You don't need to keep asking me to remove it for you.  You can endure it for your testimony of the power of Christ to strengthen you through your ordeal.  In that case My grace and mercy will be enough for you.  But, you don't really need to keep asking me to heal you [you've asked three times, and there's a reason I haven't responded] ... I want you to know that you have been given the Authority and Power to command your own healing. I have given you the very power that I showed in the Holy of Holies! And that power is available to you moment by moment, having taken up residence in you, and you can call on it whenever you need it.  So, Paul, when you're feeling harassed, insulted, persecuted or oppressed by the forces of the Enemy -- when you're feeling weak, stop and realize you are filled with ability and power.
Can you see the difference in the more modern translations of this passage and the translation from the original Greek language?  I am not saying that any of them are the right interpretation or the wrong interpretation.  And we must ALL be careful not to fit Scripture to our theology [and personal view of God].  Instead, we should endeavor to fit our theology [and view of God] to Scripture. But when it is not clear -- when we do not know exactly what the thorn is, and God does not make it clear why He did not heal Paul -- we are left with these mysteries and opportunities for the Enemy to corrupt our understanding -- and it is hard to come to a definitive understanding.
I am not trying to convince you either way, but I think it is important that we take note of all the interpretations and pray for revelation from God -- seek the mind and counsel of God to strip away our man-made doctrines, our traditions, and our sacred cows so that we might know His Truth in this matter.
In the end, perhaps this old adage will sum up your conclusion:  A man convinced against his will, is of the same opinion still.  But, at the very least, I hope this discussion will encourage you to do a deep study of the Word.  I think it is no accident that God made this passage somewhat vague and difficult to understand.  Those with a heart willing to be transformed by the supernatural power of God, will hunger to seek more of Him.  We can agree to disagree, and we can debate in love.  In the end, we are seeking Him, and His Kingdom will be blessed.

Ephesians 3:20-21   "Now to Him who is able to do far more abundantly beyond all that we ask or think, according to the power that works within us, to Him be the Glory in His Church, in Yeshua, and throughout all the generations to come".

Email ThisBlogThis!Share to TwitterShare to FacebookShare to Pinterest
Labels: Our Theology, The Bible