The Politics of Fear ... And How To Overcome It

I know that today will be an important day for the future of our nation.  Today is the day that each state's electors will cast their votes in the Electoral College that will legally elect the next President of the United States. In our modern history, the casting of electoral votes has been a purely ceremonial event in which the results from voting on Election Day have been rubber-stamped. Not this year!
The political and spiritual forces have aligned to try to prohibit the legitimization of the Trump Presidency. I am not here to make a case in favor of, or against, Mr. Trump. Whether or not you are happy about his election, it should concern us that our rule of law and political foundation are being threatened.  As is so often noted, "there are consequences in elections; there is a winner and a loser".  But during this election cycle, electors are being lobbied -- and sometimes, intimidated -- to "go rogue" and defy the voters' preferences in their home states, and to vote "their conscience".  And perhaps, surprisingly, the primary stimulus to make that happen has been FEAR.  Everything from women losing their rights, to deportation of immigrants, to selling out to Russia and the Communists, is being used to encourage electors to defect. But this should not surprise us. Fear is one of the primary spiritual weapons that the Enemy uses to control the destiny of mankind.
We only have to look back at the Biblical story of Joshua and Caleb, who were part of the contingent of 12 spies sent into the Promised Land to determine if it could be conquered. But ten of the spies came back and reported that they were defeated before they ever began. They were filled with fear and let that fear completely vanquish them.  But it was Caleb who said, "But my brothers who went up with me made the heart of the people melt; yet I wholly followed the Lord my God". 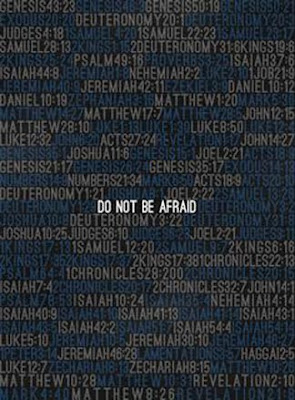 That is what we're seeing today. Those who are unhappy with the direction in which our nation is moving (whether you believe God has a hand in it, or not) are instilling their fears in the general population. But, you see, Caleb was free from fear, and he used his trust in God to try to help the people of Israel overcome their fears. And those of us who are like Caleb, and surrender to the will of God, have something to say to people who are afraid.  Our surrender to God is the only answer to the problem of fear.
I know it will be difficult to minister and serve others who do not have the same faith we do in YHWH. And it is a disservice to all people to pretend that there will be no difficulties; we cannot and should not persuade others to escape reality.  BUT, we can listen to their fears, remain calm, report the facts, and look for ways to encourage them.  After all, Caleb did not pretend that the giants did not exist. But he was different from most of the men who returned from the Promised Land spreading their fear. He tried to report the good things, too.
I know this may sound too simplistic or optimistic. There are haters who will never be convinced that any good can exist after January 20, 2017.  But the entire nation would be well-served to remember Caleb's words. He said, "We are well able". This does not mean that he had confidence only in himself. Nor did he put undue emphasis on the military strength of Israel, either. No. He was emphasizing where their power really came from. It came from firm confidence in God’s power.
Sadly, I think that those who have jumped on the "fear bandwagon" after this election, believe only in the power of men.  And if their man, or woman, isn't declared the winner, then the spirit of defeat joins forces with the spirits of fear, anger, and bitterness to keep them from seeing any possibility of success. But, We are well able! We are able to overcome our differences and work together for the good of the country.  We have incredible resources to help the next generation(s) reach new heights of prosperity. But we must teach them a robust work ethic and the fearlessness to take advantage of the opportunities put before them.  We must also give them a sound and solid moral foundation by which to live their lives; fundamentals by which they will lives that are pleasing to God, as they seek to serve others.  All this is available to every American -- regardless of whether your candidate is declared the victor today or not.
Fear dealt a severe blow to the progress of the Israelites over 3500 years ago. Their growth and progress was stunted, and fear was to blame. Nothing has changed over the centuries. We must not allow fear to take root in our land and diminish the blessings and potential for our future generations. Stay the course ... trust in the Lord ... and know in your spirit that our giants can be defeated!

Numbers 13:30    But Caleb quieted the people before Moses and said, "Let us go up at once and occupy it, for we are well able to overcome it."