Ruling The Tribes of Israel: Democracy or Representative Republic? 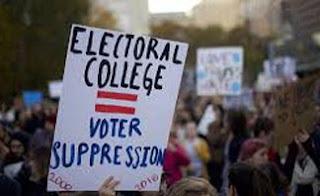 In this season of political malcontents, we are seeing a deliberate attempt to disqualify our Presidential election results.  We hear complaints that the voice of the multitudes should be the deciding factor, since Hillary Clinton won the popular vote.  "We are a Democracy, and democratic rules should apply", they scream. Others are shouting, "No, we are a representative republic!"  Which is it?
Here's what everyone needs to understand:  Terminology is very important. A common definition of “republic” is, to quote the American Heritage Dictionary, “A political order in which the supreme power lies in a body of citizens who are entitled to vote for officers and representatives responsible to them” — we are that. A common definition of “democracy” is, “Government by the people, exercised either directly or through elected representatives” — we are that, too.
The United States is not a direct democracy, in the sense of a country in which laws (and other government decisions) are made predominantly by majority vote. But we are a representative democracy, which is a form of democracy. But we are also a constitutional democracy, in which courts restrain, in some measure, the democratic will. And the United States is therefore also a constitutional republic. Indeed, the United States might be labeled a constitutional federal representative democracy.
Our problem in understanding our form of government is inherently a problem in education.  I'm afraid our schools do not teach the truth about the founding of our form of government, and they certainly do not teach the Biblical foundation upon which our government was structured.  That's right! We can look to the Bible to see how God structured governing rules for the Tribes of Israel. And then we can decide if that was the model our Founding Fathers had in mind.
The republican form of government, as we know it, is representative (not democratic) so that a selected group of leaders make national decisions. Those leaders may be selected by popular consent, but decisions about specific laws are not voted on by everyone. Thus, in a republic, it is not a single king or ruler who decides policy, nor is it a vote of every man, rather it is the vote of representatives of the people who make decisions for the nation. 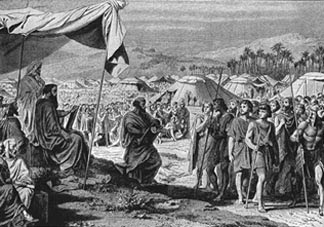 And we can see that model in God's revealed plan for human government through the Hebrew republic founded under Moses and Joshua in the Old Testament. For instance, when Joshua presided over the division of Israel (described in Joshua 18:4-5), where seven tribes had yet to receive their tribal lands, the people were to select three men from each tribe. But Joshua was to “send them”, words which seem to indicate a consecration, a sending, as the men went forth to represent their respective tribes. The governmental work of dividing up the land was not done by Joshua alone, and it was not done by democratic vote. It was accomplished through representatives under the authority of an executive (Joshua) and the election of the people. This is an example of their republic in action.
There are many other references to the chiefs of the people, or of the princes, and how they interacted on behalf of the people. All of these were a model for American thought during our founding period, helping to keep us from the despotism of a too strong central authority, or from the mob-rule of a democracy.
Ancient Israel also provided the original example of ‘We the People’ through their covenantal oaths at the outset of their national experiment. Though they were twelve tribes, God treated them as a single nation traveling together in a single cause in a united land.  We the People, is a term used to describe that uniting of individual free states under a Godly, covenantal structure.
We the People who established the nation or exercised its highest powers. Those pagan nations were never able to maintain an advantageous combination of representative government with an executive head. The citizens forever found themselves caught between the oppressions of violent, lawless monarchs or the tyranny of anarchy. 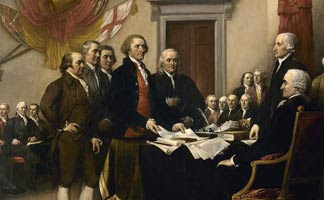 I'm pretty sure that when our Founding Fathers were writing the Constitution, they did not have the Roman or Greek Empires in mind.  In those governments it was not
No, it was the Hebrew republic that defined and gave an example for a righteous civil government. Just read the opening lines of our Constitution:  We the People, of the United States, in Order to form a more perfect Union, establish Justice, insure domestic Tranquility, provide for the common defence, promote the general Welfare, and secure the Blessings of Liberty to ourselves and our Posterity, do ordain and establish this Constitution for the United States of America. Can you see the example that the Hebrew covenant with their God and their fellow tribesmen provided?
During the founding era of our nation the broadly accepted law commentary was Blackstone’s.  These were Commentaries on the Laws of England, an influential 18th-century treatise on the common law of England by Sir William Blackstone, originally published by the Clarendon Press at Oxford, 1765–1769.  Sir Blackstone assumed everywhere in his commentary that the law of Moses was entirely valid and still the only right basis for any nation. God’s law was assumed as the foundation for common law rulings. It was the law of the people and the law of our land in the early years. As we became more atheistic and godless we traded God’s law, the law of the Hebrew republic, for man-made statute law. Now we are oppressed by an unending myriad of statutes that bind us hand and foot while they wind their way through Washington.
So, it's time to stop the rants and tirades, demanding that we need to abide by our "democratic" principles of government.  That is not the basis for our form of government. We must recognize that God's precepts for government, civil authority, justice, and liberty are the foundation of this nation.  And as I view the ridiculous demands for endless recounts and demolishing the Electoral College, I would remind all that the Hebrew republic was united under a single system of unchanging law. We would do well to look to God's model for government, trusting it, and remaining in it. Nations come and go, but God's form of government never changes.  Let us not veer from His path.

Thank you to Don Schanzenbach for his article, "Biblical Plan for Representative Government".

Deuteronomy 16:18-20  "You shall appoint judges and officers in all your towns that the Lord your God is giving you, according to your tribes, and they shall judge the people with righteous judgment. You shall not pervert justice. You shall not show partiality, and you shall not accept a bribe, for a bribe blinds the eyes of the wise and subverts the cause of the righteous. Justice, and only justice, you shall follow, that you may live and inherit the land that the Lord your God is giving you."
Posted by Pam Kohler at 7:00 AM

Email ThisBlogThis!Share to TwitterShare to FacebookShare to Pinterest
Labels: Constitution, Politics, The Bible