Facing Darkness: A Story For The Ages

Like my review on the new movie, Hacksaw Ridge, I feel compelled to point you to another inspiring true story... this one more recent.  And again, it is being portrayed on film, and is worthy of our attention; especially considering the largely perverted and exploitative entertainment industry. I will continue to praise and encourage the efforts of film-makers who accurately, and appropriately, promote our faith.

Even though Americans are now focused on the upcoming holidays, the news around the world reminds us that we are still in a physical and spiritual battle.  Fires rage in Israel; the Middle East is still in turmoil; mass graves are uncovered in Mexico; earthquakes in Japan and Central America remind us that the earth "trembles"; and our nation remains divided, as tens of thousands take to the street in protest. But even in the midst of these disheartening headlines, there is a story that will lift you up and inspire you.  While it is another story ripped from the headlines, it speaks to all of mankind through history. 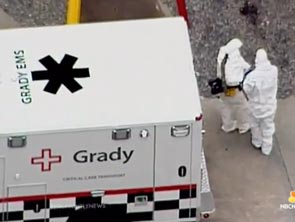 I'm sure none of you have forgotten the fear that struck the world in late summer of 2014 when the Ebola virus broke out in West Africa.  And I'm sure you still recall the image of Dr. Kent Brantley -- the first person infected with the deadly virus on U.S. soil -- being walked into Emory University Hospital in Atlanta, after being flown from Africa in a desperate move to save his life.
His story, and that of his wife Amber, is a moving tribute to their faith in God while in the heart of darkness.  And now, there is a gripping documentary, titled Facing Darkness, from Franklin Graham and Samaritan's Purse.  The film has not only won the Accolade Global Film Competition’s Award of Excellence, but has also received the Best Feature Documentary Premiere Award at the 2016 Heartland Film Festival.  The film festival celebrated its 25th anniversary this year and featured more than 130 independent films out of 250 entrants. It is not affiliated with Christian nor conservative organizations, and is an independent nonprofit arts organization, with a mission to "inspire filmmakers and audiences through the transformative power of film." Heartland selects films that "inspire and uplift, educate and inform, or have the ability to shift audience's perspectives on the world."
And with its powerful message of faith, we can only hope that Facing Darkness will have such an impact upon the world audience.  In a statement to the press, the festival's director of programming and marketing said the film was "a testament to the resilience of the human spirit and the power of conviction and hope in the face of despair."  Isn't that the real story of the human race?  Aren't we all in a battle to find hope in a world that is doomed to judgment and destruction unless we surrender to the power that is faith in Jesus? And isn't our mission here on earth to serve others in the likeness of our Savior; even to the point of death, if that's where it leads?
That is the story of Dr. Kent Brantley and hygienist, Nancy Writebol, both missionaries working for Samaritan's Purse, an evangelical Christian humanitarian aid organization that provides aid to people in physical need as a key part of Christian missionary work.  The organization is run by Dr. Franklin Graham, who serves as President and CEO.
The film was shot in Liberia and the U.S. where the events took place. The story highlights the lives of heroes who risked their own health and life in an effort to stop one of the deadliest epidemics this century. Ebola infected more than 28,000 people in Liberia, Guinea and Sierra Leone, and 11,000 lives succumbed to the disease. Think how easy it would have been for Dr. Brantley, and the others who worked with him, to simply ask to be evacuated, leaving the problem of Ebola to the people and authorities in Africa.  But that's not who they were. They put others before themselves, in a true example of Christian concern for the sufferings of others.  "Samaritan's Purse workers were holding the last line of defense in a crisis the world was largely ignoring," said Graham. "Hundreds were dying and it was only growing worse. When the disease struck Kent and Nancy, we knew we had to get them home for treatment. It was their only chance, yet it was something no one had ever done."

But the film is about more than the advances in science and medicine that made their eventual cure possible.  It is about facing the fear and the darkness of despair and the absence of hope.  "Faith is not something that makes you safe," Dr. Brantly is quoted as saying when describing his decision to stay in the country and fight the disease. "You had to face death in the eye and decide, 'Who am I going to be today?'" And when you think about it, that is a decision we each have to make -- every minute of every day. But do we make that decision consciously and deliberately, or do we go about our day only responding to those things that affect us? Are we aware of who or what image we are displaying to the world? Do we act like Christ lives in us, or do we react from our own fleshly desires?  Those may sound like pointless and existential questions, but isn't that precisely what God asks of us?
Dr. Kent Brantley took those questions seriously.  And his testimony is a reminder to us, that if we proclaim to be a Christian, we have a responsibility to the One who saved us: "Even when I was facing death, I remained full of faith. I did not want to be faithful to God all the way up to serving in Liberia for ten months, only to give up at the end because I was sick... We have to choose compassion over fear. We cannot let fear be the motivating force for the decisions we make in life, for the way we treat other people," he said. "There are a lot of big things going on in our world right now and in our country. I think this story can help us navigate those other experiences as well, as we wrestle with the challenge of choosing compassion over fear, and treating other people out of a sense of respect and love, and not out of a sense of fear and self-preservation". Sounds a lot like how Christ lived His life, doesn't it?
To further emphasize this point, Franklin Graham says, "I think when there's a crisis, God wants us to be there. He doesn't want us to run away. God put us there [in Liberia] for a reason, and He expected us to do something about it." This is the same story of Jesus's three years as God in the flesh. The existence of God's chosen people, the Jews, had come to a crisis. And God wanted to be there, in the flesh, to convict them and to cause a change in how they viewed Him. God chose to do something about the state of those He had chosen, and ultimately, all whom He has created. So He came in the flesh, as His Son, Jesus; fully man.  And as that man, He did not run away.  He did not ask to be "evacuated", even though, like Dr. Brantley, He could have asked to be rescued from His impending death. Instead, He stayed and served. 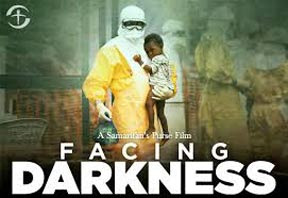 There are other similarities between Kent Brantley's story and our commission to serve as Jesus did.  Brantly’s decision to stay was particularly heroic, especially considering the fact that escalating native opposition added to his perils. “Complicating the situation – after years of civil war – the people of Liberia deeply distrusted any authority and went so far as to blame the aid workers for spreading the disease,” the documentary’s release explained. “Hospitals and people were attacked. Yet the Samaritan's Purse team continued to serve.” In His day, Jesus's message was controversial, too, and eventually, those He came to serve began to blame Him for the increasing pressure from their own Jewish officials and the Roman authorities.  Yet He continued to offer hope and to attend to those He came to serve.
So this inspirational story brings me to this conclusion:  What is the crisis in your life -- whether large or small -- the crossroads where you get to choose how you are going to act towards another person? Do you automatically weigh how your decision will affect you -- or do you selflessly consider only how you can make another person's life better? Dr. Brantley faced true darkness ... despair in the face of an agonizing death.  Like our Savior, He was willing to sacrifice himself, in the desire to show compassion to another human being, while offering the possibility to save a life.  While Kent Brantley only offered life in this world, Jesus offers it for eternity.  And all He asks is that we love our God with all our heart, and our neighbor as ourself ... whether that neighbor is next door, or a world away. And no matter how big or small our neighbor's crisis may be... that we simply answer the call and choose compassion over fear in service to others. In doing so, we will be facing our own darkness, and triumphing in the spirit of Christ!

Facing Darkness will be released on March 30, 2017 in select theaters around the country.  You can watch the trailer here.  Thanks to The Christian Post and One News Now websites for their reporting on this inspirational story.

Isaiah 41:10   ‘Do not fear [anything], for I am with you; Do not be afraid, for I am your God. I will strengthen you, be assured I will help you; I will certainly take hold of you with My righteous right hand [a hand of justice, of power, of victory, of salvation].’

Email ThisBlogThis!Share to TwitterShare to FacebookShare to Pinterest
Labels: Christianity, Faith, The Kingdom of God