Are You Ready To Talk About "Portals"?

Now, there is a topic that will send many Christians screaming for the hills!  Just the very word, portal, makes you think of scary, science-fiction phenomenon, doesn't it?  Or, perhaps, it is reminiscent of something that you might see on an old re-run of "The X-Files", right?  Certainly, it has nothing to do with the Bible ... or does it?  Actually, the word portal is nothing more than an opening, or a doorway, or a gate, between dimensions.  And the Bible is full of instances where portals are in evidence.
I can hear the skeptics among you, murmuring, "I need a little more information".  Okay, let's look at it this way... Portals are points of access, which are unobstructed by demonic interference, in which angels travel from heaven and back again in which God's provision and revelation are given to man.  Consider the angel who appeared before Daniel in answer to his prayer in Chapter 10.  In Daniel 10:10-16 this angel has a conversation with the prophet Daniel, in which he mentions several times that "I have now been sent to you"; "Your words were heard, and I have come in response to your words"; and "Now I have come to make you understand"....  So, let me ask you a simple question.  How do you think that angel was able to appear before Daniel?  Do you accept the rather obscure explanation of "He just appeared"?  Or can you comprehend that he came through a portal -- an opening between either the second or third heaven and our physical dimension here on earth. 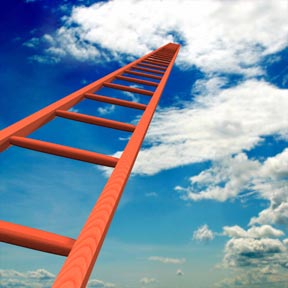 Then there is the Biblical account of Jacob's ladder.  In the book of Genesis, chapter 28, verses 10-17, the story of Jacob’s dream is recorded. “He had a dream, and behold, a ladder was set on the earth with its top reaching to heaven; and behold, the angels of God were ascending and descending on it” (Genesis 28:12).  Again, I ask the question... If the ladder extended from the earth until it reached heaven, how were the angels able to leave heaven to descend to earth?
And again, in 1 Kings, Chapter 19, Elijah was instructed to leave from sitting under a juniper tree to Mt. Horeb to see and hear what God had to show him.  Scripture tells us that God said, "Go forth and stand on the mountain before the LORD.  And behold, the LORD was passing by! And a great and strong wind was rending the mountains and breaking in pieces the rocks before the LORD; {but} the LORD {was} not in the wind. And after the wind an earthquake, {but} the LORD {was} not in the earthquake.”
Can you see that in each of these instances, God and His angels used an opening, or a doorway, or a gate to act inter-dimensionally?  Does it help to know that Proverbs 8:34 teaches that a man will be blessed who sits, and waits, and listens at the Lord’s gate?  Or that Psalm 24:7 reads, "“Lift up your heads, O gates, And be lifted up O ancient doors, That the King of glory may come in"?
I've always loved this verse in Psalms ... "Though He had commanded the clouds from above, and opened the doors of heaven, and had rained down manna upon them to eat, and had given them of the corn of heaven, man did eat angels’ food: He sent them meat to the full.”  That's a pretty clear picture ... the doors of heaven were opened.  They were fed manna from heaven through a portal!  Are you starting to get the picture?
And perhaps some of my favorite pictures of Biblical portals are found in the Book of Revelation.  "And they heard a loud voice from heaven saying to them, ‘Come up here.’ Then they went up into heaven in the cloud, and their enemies watched them.” (Rev. 11:12 ).  "And I saw heaven opened, and behold, a white horse, and He who sat on it [is] called Faithful and True, and in righteousness He judges and wages war."  (Rev. 19:11).  I think we can all agree that the Apostle John saw openings, or portals, in Heaven that inspired these verses.
But one of the primary verses that has relevance for us Christians is Hebrews 4:16... "Therefore let us approach the throne of grace with boldness, so that we may receive mercy and find grace to help us at the proper time."  It is my opinion that this verse is to be taken literally.  I truly believe that since we are spirit, made in the image of God, that our spirits can approach His throne of grace and receive His mercy.
But here is something that Christians also need to realize:  The dark side is also trying to gain access to earth from the second heaven.  The evil angels are just as able to come through portals or openings as the good ones.  My husband believes his first experience with a spiritual attack took him through an opening between our physical dimension and into the spiritual dimension, or second heaven, if you will.  He fought and struggled against an entity that he felt was smothering him.  He said he literally thrashed and flailed until he was able to get the name "Jesus" out, when the entity vanished.  During his entire fierce struggle, he said he watched me sleeping; I continued to sleep soundly and never moved.  And I'm a light sleeper!  He is of the opinion that somehow his spirit entered this battle through a portal.
And I have heard testimonies of others who have described their experiences in similar language to Paul, who said in 2 Corinthians 12:3:  "And I know that such a man—whether in the body or out of the body I do not know, [only] God knows—".  They will tell me, "I don't know if I was in my body, or my spirit had left my body and that was what I was seeing".  I think I need to go no further to defend the idea that portals are Biblical. 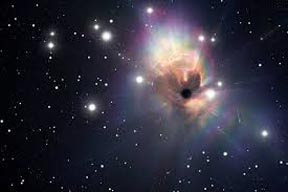 And I have to admit that my belief that portals are real has naturally led to the UFO conspiracy, and the like.  Add to that the never-ending desire of the human race for more "other-worldly" knowledge and I cannot dismiss the thought that the ungodly Elite might be seeking to open up portals to gain access to the supernatural in a bid to out-God God, Himself.  Re-read my 2014 post on Tesla, or my 2015 one on CERN, and see if the idea of portals doesn't gain some traction.
All I'm saying with this unorthodox post is that spiritual activity is on the increase.  More people are revealing "dream-type experiences" in which they are battling spiritual phenomenon that they have never encountered in the past.  And it is no secret that men of science have attempted to add to our understanding of dimensions and sought to explore them and how they interact.  But are we in danger of these scientists inadvertently opening a portal or a door not to another dimension, but into the spiritual realm, perhaps even to the Bottomless Pit or the Abyss itself?  I, for one, cannot discount this theory.
In the end, I do not see anything good coming from man's obsession with the universe, whether it be from the aspect of obtaining ancient knowledge, or reaching for new supernatural frontiers.  Just look at our entertainment industry.  Movies, music, and TV all have a fixation on exploring the spiritual realms.  There is a problem with that though, and it is this:  We are becoming so desensitized to it, that we don't realize how dangerous it can be.  God created the veils between the heavens for a reason.  He has instituted his Cosmic Law of separation and who are we to violate that?  He is a God of order and I am convinced that any attempt to interfere with His Creation will not be tolerated.
So, I think that we can see that portals are real, and God has used them to communicate with us in the earthly realm, by sending His messengers through dimensions.  But Lucifer and his angels will take advantage of those points of access to harass and attack us.  Add mankind's selfish compulsion to  rip open the veil separating this world from other worlds or dimensions, and you get the ridiculous statement by CERN's own Director General and its Director of Research, Rolf Heuer:  "…When we open the door, something might come through it into our reality! Or, we might send something through it into their reality!"  Be careful, General Heuer.  You just might get what you wish for.

Proverbs 8:1-5    "Does not wisdom call? Does not understanding raise her voice? On the heights beside the way, at the crossroads she takes her stand; beside the gates in front of the town, at the entrance of the portals she cries aloud: “To you, O men, I call, and my cry is to the children of man. O simple ones, learn prudence; O fools, learn sense. ..."

Email ThisBlogThis!Share to TwitterShare to FacebookShare to Pinterest
Labels: Heaven, The Supernatural