Can God Heal Our Land?

The first and obvious answer is, Yes, He is able to.  He is God.  But what I'm really asking is, what are the requirements for Him to do so?  What is our part?  I know that my God is full of Mercy, but He is also a God of Judgment and Righteousness.  Are we justified in reciting 2 Chronicles 7:14, if my people, who are called by My Name, will humble themselves and pray and seek My face and turn from their wicked ways, then I will hear from heaven, and I will forgive their sin and will heal their land?  Do we even stop to realize that we are quoting Scripture in the middle of a sentence; or that we should take the whole context of this passage into account?
As Christians, we know that the Bible is a living document, written to speak to all generations.  But we have to be very careful to not cherry-pick portions to soothe our sinful souls.  Is our nation in extreme need of healing?  The answer is obvious as my heart aches over the growing racial divide in our cities; the sins of our past (slavery and the Civil War); the murder of millions upon millions of God's babies; and the moral corruption in every facet of our nation.
But can our restoration be as simple as every Christian praying that the United States "return" to God and pray, and then He will be glad to forgive all of our national sins and "heal" the land?  Shouldn't we first recognize that the bigger context within which this one small verse is pulled out?  We should be mindful that the "My people, who are called by My Name" is not specifying American Christians., or the United States.  God is talking to the nation of Israel, and is responding to a prayer that Solomon had spoken at the dedication of the recently completed Temple.  In that prayer, Solomon reminded God that He had promised his father, David, that He would not fail to have a man sit on the throne of Israel, provided the nation was careful to walk in His law as David had walked before Him. 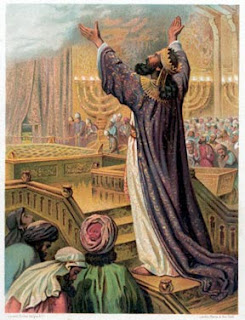 Solomon then continued his prayer, asking God to hear the prayers of the people, as they prayed towards the Temple, and forgive them their sins.  He mentions the ramifications of their sins:  being required to take an oath before the altar for sinning against a neighbor; being defeated in battle because they have sinned against the Lord; drought, famine, and pestilence because of their sins.  Time and time again, throughout the lengthy prayer, Solomon asks God to hear from heaven, from Your dwelling place, their prayer and requests, and maintain their cause and do justice and forgive Your people who have sinned against You.
God's response?  It is within the context of Solomon's Dedication Prayer, and the complete sentence He delivers is this:   If I shut up the heavens so that no rain falls, or if I command locusts to devour the land, or if I send pestilence and plague among My people, and My people, who are called by My Name, humble themselves, and pray and seek (crave, require as a necessity) My face and turn from their wicked ways, then I will hear [them] from heaven, and forgive their sin and heal their land.
So, the first thing we need to realize is that this is a specific response to a specific prayer, and it pertains to the nation of Israel.  NOW, does this mean that God, in His Sovereignty and His Mercy will not extend the same offer to us, those who have accepted the invitation of His Son?  One of the greatest truths of Scripture is that God loves us.  We are His creation and His people — those whom He will take with Himself into eternal glory!
But God is also a Righteous God, and He requires repentance for forgiveness.  We are to pray to the Spirit so that Jesus will be worshipped and known throughout the world. We obey the Spirit so that we can have intimacy and communion with God. But we don't pray because we believe that doing so will fix our country or provide us with some sort of special national blessing, and return us to a land of prosperity and power.
And it's not enough to ask for forgiveness of our sins if we don't change our sinful ways.  God will not hear us praying 2 Chronicles 7:14 if we continue to hate, based on the color of our skin.  He will not hear our prayers if we continue to take advantage of the downtrodden to secure a political vote.  He will not hear our prayers if we continue to worship pluralism and relativism.  There is only one Authority and one Absolute God, and that is YHWH.  He will not hear our prayers if we numb our hearts and minds to the needs of others in our desperate need to fulfill ourselves.  And, it is not enough to deplore and pray against the abhorrent practice of abortion if we allow it to continue to exist. 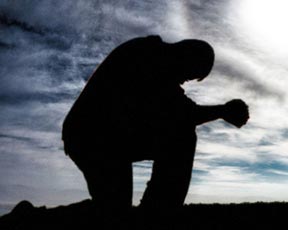 I do not doubt that millions of Christians are praying across this land, and asking God to heal our nation.  But until we truly repent and change our lives -- seek His face and turn from our wicked ways -- then I do not believe He will answer.  We cannot expect God to change our circumstances as long as our government rules in darkness; crime and violence dominate our cities; we wage war across the globe; and we violate His moral statues.
Furthermore, we tend to assume the words of 2 Chronicles 7:14 refer to Christian believers, to the elect.  But if all true believers were to do all that the verse requires, God would hear from heaven, forgive our sin, but still not heal our land.  Why?  Because if God healed the land today, it would be defiled tomorrow by the blood of the innocents flowing seven days a week from the abortion mills.
Yet, we know that by Jesus's stripes we are healed.  He died for our sins and transgressions.  But it requires effort on our part.  It requires national repentance; that turning in a new direction.  And it requires genuine humility; a fasting of the heart and calling on God in thanksgiving, supplication and intercession; knowing we can only be healed by Him.  Until we do the necessary work of changing our sinful ways, fall on our face in humility, and putting ourselves under His Authority, I'm afraid that God cannot and will not heal our land.  He cannot act in opposition to His own Character and Righteousness.  So, Can God heal our land? Yes!  Will He?  That depends on how we respond to Him.  I believe that He wants nothing more than to heal this nation, but it's up to us to show Him we are the people He desires us to be.  Right now, we're not even close...

Hosea 10:12      Sow with a view to righteousness [that righteousness, like seed, may germinate]; Reap in accordance with mercy and lovingkindness. Break up your uncultivated ground, For it is time to seek and search diligently for the Lord [and to long for His blessing] Until He comes to rain righteousness and His gift of salvation on you.
Posted by Pam Kohler at 7:00 AM