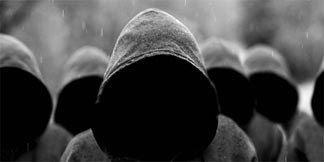 You see, there's our challenge as Christians ... he stated it right out in the open!  We, as Christians,  must deal psychologically with the evidence of evil in our midst -- we must be able to consciously perceive the spiritual battle, or we will have repercussions.  This is satan's realm and he is showing us exactly how he intends to rule.  And he is unleashing his demonic followers to bring as many as he can under his domination and control -- either by violence and bloodshed, as in the case of Austin Harrouff; or by crafty and compelling persuasion, as he accomplished with Adam Daniels, who is as evil and perverted as they come.  In an article on ABCNews.com, he clearly states he is using "charged items" in his church, and is seeking "creation through destruction".   Satan couldn't say it any better himself.  And do not dismiss him as some kind of crazy devil worshipper who has no influence.  Satan is freely using him and working his plan, without any seeming resistance by Christians.  The devil is publicly displaying his power and authority; why isn't he seeing ours?
Bottom line ... here is what we need to realize:  These two cases are sensational and read like some horror film.  But, because of modern technology, the whole world is able to see and read about these demonic displays.  They are becoming more numerous and out in the open.  The problem is that they are so 'in your face' that few actually ‘see’ it. There is such a technological saturation of evil – from entertainment mediums to virtual fantasy porn – that a ‘normalcy bias’ kicks in and most people (even Christians) don't see it as the Biblically prophesied increase in wickedness, murder, crime, and belief in the occult.  It’s kind of like in the days of Noah.  Everyone just "ate and drank", even though their judgment was staring them in the face.  And just as  Jesus warned, we are going about our business, not knowing or understanding, and it will soon be too late.  In the events of our day, the Lion of Judah is roaring His prophecy. I wonder if anyone actually hears it?

Micah 2:1    "Woe to those who devise wickedness and work evil on their beds! When the morning dawns, they perform it, because it is in the power of their hand."