Another Move In The Cosmic Chess Match!

If you are like most Americans, you may be a little confused by all the media coverage of "Brexit", and what, if anything, it has to do with us.  In case, you're not quite sure what that is, let me put it in simple terms... Brexit stands for the British exit from the European Union, and this move comes with lots of implications, both from a current worldview and from a Biblical perspective.  Follow my train of thought ...
You may remember that, in the past, I have referred to a cosmic chess match between God and satan.  If you can, I want you to picture it like this:  On one side is the Most High God and His army of angels, led by the archangel Michael, "the great Prince".  On the other side is Lucifer, or the devil, and his army of rulers, powers, and spiritual forces of wickedness.  And they battle in the spiritual realm, resulting in consequences in this earthly realm. 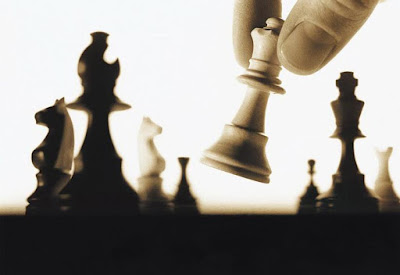 Focusing in on this cosmic chess match a little closer, and we see two armies, if you will; one led by Michael, identified as an angel (messenger), and whose name means "who is like God".  I contend that there is a good argument that the title "Michael the archangel" can be translated as "The greatest messenger who is God", or Jesus.  The other army is led by an angel once known as Lucifer, the anointed cherub who was the guardian of God's throne.  But pride, which caused him to seek to overthrow God, resulted in him being cast away from God and out of Heaven, where he is still seeking to dethrone God by working from the spiritual realm through men on earth.
So what does this have to do with Brexit, and why should we, as Christians, find any meaning in it?  The most recognizable Scripture that embodies the premise of this cosmic chess match is found in Genesis 11, and the story of the Tower of Babel.  You will remember that at the beginning of this story, the Bible tells us that "the whole earth spoke one language and used the same words".  According to the story, a united humanity of all the generations following the Great Flood, speaking a single language and migrating from the east, came to the land of Shinar.  There, in their arrogance and self-glorification, they agreed to build a city and a tower "tall enough to reach heaven"; seeing this, God confounded their speech so that they could no longer understand each other and scattered them around the world.
In Hebrew and Christian tradition, Nimrod is considered the leader of those who built the Tower of Babel in the land of Shinar, though the Bible never actually states this.  But Nimrod's kingdom included the city of Babel in Shinar, and it was likely under his direction that the building of Babel and its tower began.  But remember the part of Scripture that relates that Nimrod "began to be mighty in the earth"?  It is my belief that after God cleansed the earth with the Flood (a bold move on the cosmic chess board), satan began to plot his strategy.  The name Nimrod, in Hebrew, means "rebel", and I think satan revived his own spirit of rebellion in Nimrod, and used him to build a tower from which satanically influenced men could assault heaven itself.  God's next move was to scatter the people into separate nations, speaking different languages, so they could not form a unified coalition again.
Throughout history, satan has attempted to infiltrate this earthly realm and influence, or revive, his rebellious spirit in men who would further his cause to defy God.  Every time satan used an Antiochus Epiphanes or a Hitler to spread his evil on the earth and separate men from God's will to reconcile with them, God would counter his move and put an end to the wickedness.
And now, through the spiritual eyes of men much smarter than me, I am beginning to see another set of moves on the cosmic chess board.  On his website, shoebat.com, Walid Shoebat contends that the European Union was a move by satan to, once again, build a coalition to establish his earthly authority, from which he could institute a global (or one-world) government to control the earth and destroy God's people.  If he can't have Heaven, then he'll take the earth for his throne.
By moving towards a common currency and governing body for all of Europe, satan saw his chance to thwart God's long-ago move to scatter the people at the Tower of Babel and create independent nations.  With an encroaching one-world government and global currency system, it would set up satan's future plan that no one can buy or sell without complying with his currency system, the mark of the beast.  And his move was a good one!  The nations of Europe were subject to the governing rules of the EU, and were losing their autonomy and ability to self-rule.  And perhaps satan's greatest evil intentions came through the forced acceptance of Muslim refugees among the EU countries, and the influx of jihadist ideology. 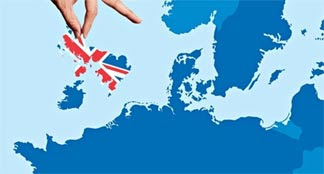 But does the exit of Britain signal God's next chess move?  Could He be setting the stage for a break-up of the European Union, and the re-establishment of His independent and sovereign nations that He began at the Tower of Babel?  Certainly, Britain's exit has stirred similar thoughts among the governments of Scotland, France, and Spain.
Walid Shoebat, in his article, takes it a step further, stating:  We are beginning to see the signs of a future split in Europe, even states within states, separating between sheep and goat nations where France, parts of Italy, Spain and Portugal will be destined as sheep nations, while Germany, the Netherlands, Finland and the Baltic states or major parts of these will remain liberal and anti-God; to be destined as goat nations. Austria could go sheep or goat, we do not know.
Interesting concept, isn't it?  Please take the time to read his entire article, it is fascinating and not without Scriptural support.  Is it accurate?  Only God knows.  But I am certain that Brexit is an indication of a major shift in the cosmic war in the spiritual realm.  In the coming days, you will hear the media discuss the worldly implications -- effects on the world economy, global trade, immigration, etc. -- but I am more interested in the spiritual ramifications.  How will it affect the spiritual foundations of the nations, and on whose side will they align themselves?  Will there be a renewed interest in seeking God, or will secularism and jihadism continue their march across the globe?
A case can be made for Shoebat's assertion that Brexit is the beginning of a move by God.  Consider his statement: "If a one world government is to take place or a European Union is to control the entire continent, how then will God “divide the nations”? How then will “nation war against nation, kingdom against kingdom” and how will God “divide the nations” “sheep from goats”?  Whether this is just an isolated set of circumstances, or we see the entire dismantlement of the EU, and nations sliding toward the end-times prophecies remains to be seen.  But of this, I am certain:  the cosmic chess match will continue; with God countering every move that satan makes until His complete plan for His reconciliation with man is accomplished.  Then it will be checkmate with the return of Jesus!  For now, all I need to know is that there is a battle plan in the spiritual realm to rule the earth, and I know which side I'm on.

1 John 3:8        "He who sins is of the devil, for the devil has sinned from the beginning.  For this purpose the Son of God was manifested, that He might destroy the works of the devil."