I have been wanting to comment on this topic for the last few days, but honestly, did not feel that I could speak on behalf of Black Americans because I felt it would be presumptuous of me to say that I could identify with their objections.  So, I was happy to hear that the president of the Coalition of African-American Pastors (CAAP) say that it is "a gross insult" to suggest that "gender-confused" individuals are being discriminated against in much the same way that Black Americans have been discriminated against in the United States.  In fact,  The Reverend Bill Owens suggested that the homosexual and transgender community is attempting to co-opt the legacy of Dr. Martin Luther King and all those who "faced fire hoses and hatred"  in their very real struggle for equal and civil rights. 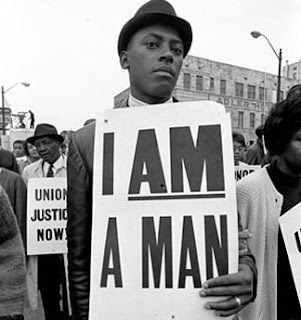 Now, that Rev. Owens has spoken out, I can take a position of whole-heartedly agreeing with him. To compare a difference in skin color (and the suffering and injustice that was perpetuated against Black Americans) to a difference in sexual behavior and anatomy (that has resulted in which bathroom transgenders can use) is obviously dissimilar and ill-matched.
It is simply untrue that a person who is confused about their sexual identity has suffered the same injustices or lack of rights that Black Americans have.  As far as I know, transgender Americans have never been horribly enslaved, endured forced separation of families, or been denied the ability to drink out of a water fountain, eat at a lunch counter, or attend the school of their choice.  Sadly, it took this nation until the 1950s and 60s to begin to right these wrongs.  To give a quick summary, the Civil Rights Act of 1964 banned segregation in schools, at work, and in public places. The Voting Rights Act of 1965 guaranteed citizens of all races and ethnic backgrounds the right to vote.
And now, the LGBT community wishes to equate their struggle with the Black community and suggests the idea that "Transgender is the new Black."  The current Administration is backing that idea by supporting HR 3185, which is legislation that would amend the Civil Rights Act to prohibit discrimination on the basis of sex, sexual orientation, or gender identity.  In fact, Attorney General Loretta Lynch argues that “gender identity is innate,” in the same way that skin color is innate.
How is it, then, that the American Psychological Association (which generally supports transgenderism) says, "Sex is assigned at birth, [and] refers to one’s biological status as either male or female, and is associated primarily with physical attributes such as chromosomes, hormone prevalence, and external and internal anatomy. Gender refers to the socially constructed roles, behaviors, activities, and attributes that a given society considers appropriate for boys and men or girls and women. These influence the ways that people act, interact, and feel about themselves. While aspects of biological sex are similar across different cultures, aspects of gender may differ." 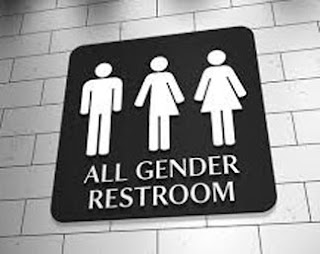 In other words, "sex" and "race" appear to be equivalent, since both are assigned at birth; while "sex" and "gender" are not the same, since aspects of gender can be different, depending on roles that are "constructed" or developed.  Therefore, for the government to tell us that the amendment to the Civil Rights Act insinuates that gender identity is equal to a person's sex (or the color of their skin) is flawed logic.
Now let's carry the erroneous legal argument one step further.  The Civil Rights Act was intended to stop separation of the races on a moral and rational level.  Likewise, separate bathrooms for men and women is a moral and rational idea, but separate bathrooms for blacks and whites is not. … A black man’s nature and physiology is not different from that of a white man, an Asian man, or an Hispanic man. The same is not true of sex differences.  Males and females are inherently different from one another. Their physiology is different and their body parts function differently.  For thousands of years, those differences have been respected in performing the most private of bodily tasks.
Now, to try to equate bathroom privileges to blatant discrimination against the Black race is not only demeaning and dishonoring the struggle of Black Americans, but an obvious attempt to hijack Black history in order to give a false interpretation of the transgender issue.  As Reverend Owens stated, “Transgendered persons are not asking for equal rights—they are asking for special rights that violate the privacy of women and simple common sense.”  I agree!  Let's not exaggerate and make their agenda something it's not.   And you need to know that this amendment to the Civil Rights Act is not the only legislation being expropriated.  Title IX of the Education Amendments of 1972 is also being upheld as legislation that applies to the transgender issue.  It is a comprehensive federal law that prohibits discrimination on the basis of sex in any federally funded education program or activity.
As the National Review reported on Friday, "This morning the Department of Justice and Department of Education released a joint statement of extraordinary breadth and scope. Under the guise of offering “guidance,” the Obama administration put every single public and private educational institution receiving federal funds on notice that it intends to interpret and enforce Title IX — a statute, written in 1972, that by its explicit terms only prohibits sex discrimination — as also prohibiting discrimination on the basis of “gender identity, including discrimination based on a student’s transgender status.” If a boy claims he is a girl, then, according to the Obama administration, he is a girl and must be treated as such by the educational institution."  In other words, if an individual wishes to embrace a different sexual identity, then the federal government is going to try to coerce everyone else to embrace their choice, too, and our daughter''s school locker rooms, showers, and bathrooms will no longer be "for women only".
You can see where all this is leading. Any attempt to maintain traditional distinctions between the sexes is being declared illegitimate, bigoted, and illegal by our culture, our society, and now our government.  And this radical opinion is being sold by hijacking the injustices done to Black citizens.  Bigotry was a huge aspect of the Civil Rights movement and it was right to declare it illegal, based on race.  But to equate the transgender bathroom debate on par with the struggle for racial equality is contrived, unconvincing, and insulting to every Black American.
I have sympathy for those who are confused about their sexual identity, I really do.  I can't imagine what it must be like to not know how God sees you, or how He made you, and to be led by false messages meant to confuse you, confound you, and lead you astray.  But to equate the fraudulent transgender argument with the immoral practice of slavery and discrimination is both disgraceful and offensive.  It's just another sign of how far the Enemy will go to spread his lies and deception.

Luke 16:15    And He said to them, "You are those who justify yourselves before men, but God knows your hearts. For what is exalted among men is an abomination in the sight of God."

Email ThisBlogThis!Share to TwitterShare to FacebookShare to Pinterest
Labels: Constitution, Our Culture.