"The All-Seeing Eye": Searching For The Light & Immortality -- Part 1

As I grow older, I am amazed at the unfolding of knowledge that God is granting me.  As my husband, PLW (Peace-Loving Warrior) likes to tell me, "It's like the layers of an onion... God peels back one layer at a time, revealing what we need to know for that season.  But we are always aware that there is another layer, just waiting to be peeled back, and giving us fuller knowledge of Him."  There are times I mourn that I didn't seek Him earlier in my life; I sometimes think I will run out of time before I know all I want to.
That's why I am in awe of the younger generation who is on fire for God, and who is able to use the technology of this age to reach out to the youth and young adults with the Gospel Message.  But they inspire me far beyond fulfilling the commission we are all called to.  They are more bold and adventurous in seeking out the "fringe" topics that older, more mature Christians shy away from.
They are unafraid to speak about demons, and the supernatural, and spiritual warfare -- all within a Scriptural context, mind you.  They seem to see things more clearly than those of us who have been influenced by church doctrine and "religion".  They are more pure in their willingness to believe God -- not just believe IN Him.  By that, I mean that they believe that Scripture means exactly what it says; not the contaminated and diluted interpretations that our various denominations have succeeded in convincing us is God's Truth.  They believe the Word is Truth, and are unafraid of accepting its veracity -- even if it points us to unconventional understandings of God's Power that is beyond scientific understanding or the laws of nature.  They have no trouble in believing that we serve a BIG God!
That's why one of my favorite podcasts to listen to is The Fourth Watch with Justen Faull.  Justen is part of that younger generation, and he is not only strong in his faith, but continues to edify and instruct me on topics that are Biblically sound and relevant to the craziness that we are witnessing in the world.  But, perhaps most importantly, he is able to speak God into his generation, and in a way that captures their attention, while telling them of His Truth.
Recently, I listened to a podcast on a subject that not only fascinated me, but appalled me.  It centered around a popular conspiracy theory about "The All-Seeing Eye".  Justen and his guest speaker, Ark of DestinyLabs.com,  conversed on the resurgence of ancient shamanistic practices that involve the Pineal Gland in our brain.
Before I go into the shocking information that was revealed on the podcast, we should understand why there is so much fuss over the Pineal Gland.  A simple definition of this gland is that it is "a pea-sized conical mass of tissue behind the third ventricle of the brain, secreting a hormonelike substance in some mammals."  Medical websites refer to it as "a nearly mysterious gland"; located deep in the center of the brain; shaped like a pine cone and involved with sleep/wake patterns.  Doctors tell us that the pineal gland secretes a single hormone—melatonin (not to be confused with the pigment melanin). This simple hormone is special because its secretion is dictated by light. Researchers have determined that melatonin has two primary functions in humans—to help control your circadian (or biological) rhythm and regulate certain reproductive hormones.  They also say it was once known as "the third eye".  I have news for them -- it still is!
After listening to the Justen Faull podcast, I began to do some research on the Pineal Gland, and it led me down some fascinating and frightening trails.  I wanted to know why it's designation as "the third eye" would have significance to us as human beings, and as Christians.  Today, in Part I on this topic, I want to give you some information on the history and symbolism that surrounds the Pineal Gland.  And then, in Part II, on Friday, I will take you down the disturbing paths that this research led me.  I am by no means telling you things that you could not easily discover yourself; and these are not my original ideas.  But I found this entire topic compelling as I began to connect the dots. 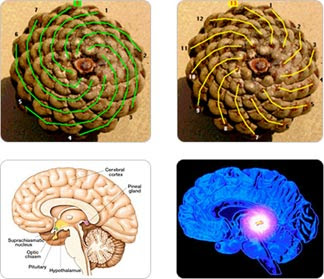 John 1:9    "There was the true Light which, coming into the world, enlightens every man."