Where Are The Feminists?

In our current political season, a favorite rallying cry is that there is "a war on women".  It is usually lodged against the Republican Party to describe their policies and legislation as a wide-scale effort to restrict women's rights, especially reproductive rights.  As unmerited as this charge is, I realize that the so-called Feminists in our nation love to play the victim card, and are always on the look-out for causes or women who have been wronged. 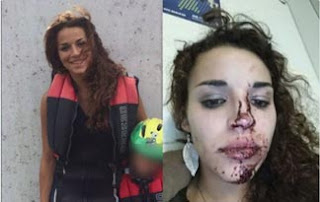 So, why are they so silent about the abuse being heaped upon the women of Europe by the Middle Eastern refugees?  They love to throw the word "misogynist" around, and what could be more representative of hatred or disrespect towards women than headlines like this at The Daily Mail:  "Migrant rape fears spread across Europe: Women told not to go out at night alone after assaults carried out in Sweden, Finland, Germany, Austria and Switzerland amid warnings gangs are co-ordinating attacks."
I mean, Donald Trump is loudly and vociferously castigated across the airwaves for his admittedly crude remarks, while not one of those feminist political strategists makes a peep about young women being fondled, raped, and being subjected to all manner of physical violations by gangs of Muslim men.
The warnings in Europe come as reports emerged that Austrian and German police tried to cover-up the issue over fears of reprisal attacks on asylum seekers and damage to the countries' tourist trade.  Where is the uproar over the last part of that statement?  Putting money ahead of the safety of their young women?  Where are all those radical feminists who scream about gender equality, racial justice, the silencing of women?
Where is the outrage over the chilling police report (about the attacks in Cologne, Germany) which describes women being forced to run through a 'gauntlet' of drunken men while officers themselves were mobbed by victims claiming they had been sexually assaulted.  Where are the champions of a woman named Jenny, who suffered serious burns when a firework was shoved into the hood she was wearing? "I heard a sizzling sound in my hood," she said. "I somehow tried to get the firecracker out of the hood. Then it fell into my jacket and burned everything. The scars will be permanent. I was lucky that it didn't explode."
In Sweden, a gang formed a ring around girls and started molesting them. A police spokesman said, "They grabbed their breasts and genitals. In some cases they tried to drag girls into a waiting car, but those girls escaped, luckily."
Perhaps the most chilling report is that which comes from German police, who have confirmed what they found on one man they have arrested from the gang of Arab and North African men who attacked women in Cologne.  Written on pieces of paper, police discovered lurid phrases in Arabic translated into German for him to use against women victims.
Among the threatening messages was: "I'll kill you."  The notes also had the phrase for "nice breasts" and "I want to have sex with you."  The suspects arrested from the Cologne sex attacks reportedly included 9 Algerians, 8 Moroccans, 4 Syrians, 5 Iranians, 2 Germans and one each from Iraq, Serbia and the USA. 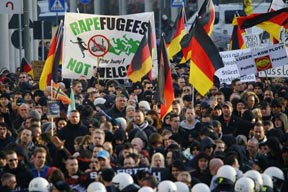 So, once again, I ask, Where is the outcry by American feminists?  Why are they not marching in the streets, as are the German protestors who question just how their government is prepared to react to this outrage, and frankly, the danger it presents their women?  Is it that they fear it will contribute to another of their cause célébres, "Islamophobia"?  It is true that the people of Europe are trying to determine how the flood of refugees is going to affect their countries.  And after the New Year's Eve attacks in Cologne, it has inflamed a debate over Germany's ability to integrate the 1.1 million asylum seekers it took in last year alone.
The facts remain... there is a clash between cultures.  Middle Eastern refugees see Western women in skimpy clothing and hugging and kissing in public.  In their culture, that equates to prostitution.  Does that necessarily lead to the flagrant rape and molestation that Europe is experiencing?  Or is there something more sinister at foot?  Regardless, there is a cancer spreading in Europe, and the growing crimes against women threaten to release an explosive reaction upon an already nervous and anxious European population.
So, are we prepared to deal with similar ramifications from our own refugee policies?  Will the feminist politicians speak out for the potential victims, or will they remain silent, so as not to offend those of a different religion?  Do not think that we will remain unscathed in this nation.  I pray that our communities and cities, and those who are elected to protect us, become aware of this potential problem before it happens here, and prevent the horrendous experience of European women.  American feminists, this is your challenge.  What are you going to do about it?

2 Corinthians 5:11    "Therefore, knowing the fear of the Lord, we persuade others. But what we are is known to God, and I hope it is known also to your conscience."