The Tale Of Two Extremes

The following news item comes to us from Rudaw, a Kurdish media network, whose aim it is to impart news and information about Kurdistan and the Middle East.  Nadia Murad, a 21-year-old Yezidi woman who escaped the clutches of Islamic State (ISIS) militants and went on to highlight the plight of women kidnapped and enslaved by the group, was officially nominated by Iraq on Tuesday for the Nobel Peace Prize. 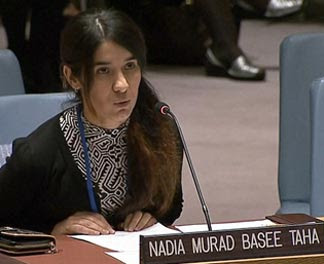 The Iraqi government said, in a statement announcing the nomination, "“She is the symbol of women’s struggle against the dark forces aiming to degrade women. Nadia talked about the plight of Yezidi women abducted by ISIS, and she asked the international community to rescue a record number of 3,400 Yezidi girls and women from the hands of ISIS."  Murad was kidnapped by ISIS along with thousands of other girls and women, when the predominantly Yezidi city of Shingal fell to ISIS in August 2014. She has traveled around the world to shed light on ISIS atrocities against the Yezidi religious minority, and told her personal story before the UN Security Council this last December.
The U.K.'s Mirror, related her testimony before the UN:  "Rape was used to destroy women and girls and to guarantee that these women could never lead a normal life again," she told them.
Nadia described her horrific ordeal, saying how she was taken by bus to a building in the ISIS stronghold of Mosul, where thousands of Yazidi women and children were exchanged by militants as gifts.  A few days after she was taken by a man, she said: "He forced me to get dressed and put my makeup on and then that terrible night, he did it. He forced me to serve as part of his military faction, he humiliated me every day."  When she tried to flee, she was stopped by a guard.  "That night he beat me. He asked me to take my clothes off. He put me in a room with the guards and then they proceeded to commit their crime until I fainted," she said.  She sobbed as she begged the Security Council: "I implore you, get rid of Daesh (Islamic State) completely.
But Nadia is not the only victim of the deterioration of the Middle East.  We, here in the U.S., have struggled to understand the civil war in Syria.  Who are the good guys?  Who are the bad? Why have we chosen the rebel's side?  While I believe that we are intentionally kept in the dark, there is no escaping the human toll in that war-torn country.
BBC News reports that civilians are under siege, and Opposition activists in Syria have told the BBC that people are dying of starvation in the government-besieged town of Madaya, near Damascus. Reports say residents have resorted to eating grass in two Shia villages further north, Foua and Kefraya, which have been blockaded by rebel forces for even longer.  The World Food Programme and the International Red Cross describe conditions in some areas as "extremely dire", after nearly five years of civil war.
The U.N. has released figures of nearly 400,000 besieged citizens throughout the country of Syria, and the meager supplies that have reached them is clearly disturbing:  "In September, some 7,800 people were reached with water, sanitation and hygiene assistance in one besieged location. In October, 10,500 people in besieged locations were provided with food, health and basic relief assistance and some 16,700 people were provided with water, sanitation and hygiene assistance. In November, 1,077 children received textbooks and 50 children were provided with winter clothes," the  UN report states.  "No other assistance reached the besieged areas in November." 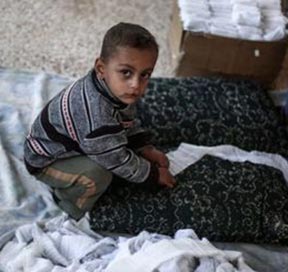 That leaves the civilians trapped inside areas under siege depending on black market supplies at inflated prices.  The UN Human Rights Council found that "Trapped without basic necessities and under constant fear of deadly snipers or bombardment, [Syrians are suffering] severe psychological trauma, and desperation characterizes the besieged communities", resulting in people, particularly the vulnerable, dying of malnutrition and lack of access to medicines and electricity.  A resident of the town of Madaya, Abdel Wahab Ahmed, told the BBC, "People here have started eating earth because there's nothing left to eat," he said. "Grass and leaves have died because of the mounting snow." He described the lack of medical facilities for the sick and vulnerable as "terrifying".  He continued, "Citizens are dying. They're eating stuff off the ground. They're eating cats and dogs."
A spokesman for the International Committee of the Red Cross, reported that people had begged him for baby milk when he travelled to Madaya in October (the last time aid reached the town). Mothers were so malnourished they were not producing milk, and there was no way to feed newborns and young babies, he was told.  A local official in Madaya told the Associated Press that the cost of goods had recently soared, with wheat costing about $250 for a kilogram and powdered milk more than $300.  (Is anyone else thinking of Revelation 6:5-8?).

Perhaps the saddest aspect of this siege is that out of the 400,000 encircled citizens, only 460 people were evacuated under the auspices of the UN and Red Cross by means of a local agreement covering the four besieged towns of Zabadani, Madaya, Foua and Kefraya.  That leaves hundreds of thousands still in danger of dying from malnutrition, disease, and lack of basic human comforts.
While half-way around the world, Millennials here in the U.S. revealed through one of the never-ending surveys that our culture is fond of, that they expect to retire early, with 15 % of them believing that winning the lottery is a viable retirement strategy, while 11% expect to be "gifted" money for retirement.  I'm assuming that they think that somehow the government is going to come up with a new entitlement program for them, just because they will need it.  Sadly, their concepts of what it takes to survive the current economic market, as well as their understanding of how current and world events will affect them is based on faulty assumptions. 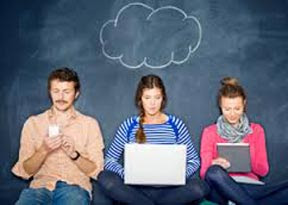 The problem is that they have educated themselves through their phone devices and the internet, and do not understand that, in reality, they have just been programmed by the Beast System.  They believe what is furnished them on their news feeds, and rarely do their own research.  In fact, the education system they have grown up in has discouraged critical thinking and urged them to embrace "group think" and the collective mindset.
That being said, I am not ready to disparage the entire Millennial Generation.  I personally know several that give me hope; young men and women with curious minds that seek to add to their knowledge, rather than accept what they are spoon-fed.  They are the hope for the future.  But are there enough of them to change the course of the world?  Will they turn to the Creator and away from the Beast?  And I fear this widening chasm among the world's population.  I'm afraid that what I have disclosed about the experiences of the youth in the Middle East will not be detained to that region.  In these two scenarios, we are seeing the extremes of constant war and relative safety; famine and waste; poverty and wealth... and I do not know if the Riders of the Apocalypse have begun their foray or not, but I'm not ready to discount them, either.
It seems as if we are barreling towards the End Times and no one is putting the brakes on.  I know that our God is Sovereign and in control; and I know there is a purpose for each of us in His plan.  I just don't want the youth of this country to be ignorant that they have a part to play -- and it is not the part that this world system would assign them.  Please, Lord, help those of us who understand what time it is to guide them to You; to help them to throw off the beguiling veil through which they see the world; and to help them engage their minds and spirits for a greater purpose.  I'm feeling it stronger every day --- this is the generation that must stand; and we can help that happen, with Your Grace, Mercy, and Power.