Our Complicity With Evil

I often work alongside my husband in his studio, taking care of our business needs and tying up loose ends that come with being self-employed.  He has the luxury of being able to listen to podcasts while he works, and I am amazed at the God-fearing men and women who commit their time and talent to bringing new revelations from our Lord to "those who have ears to hear".
Just the other day I heard Russ Dizdar of SHATTER THE DARKNESS.net referring to a popular radio host and author of a few years back, Stan Monteith.  A retired orthopedic surgeon, Dr. Monteith was kind of a precursor to those of us who speak out against the popular consensus of the day.  Many of the issues that Monteith addressed had to do with globalization and the New World Order.  He was also highly active in warning people about the dangers of fluoride.
But the significance of Dizdar's mention of Monteith had to do with a statement that the late radio host quoted from an unknown author ... "We become accomplices to those evils we fail to expose."  Now, normally, I am usually in my own little world as I work in the studio, and the podcasts that my husband listens to are often background noise; I drift in and out of awareness of what is being said.  But I heard that quote loud and clear, and it was like the Holy Spirit used a loud speaker to shout it into my brain ...  "We become accomplices to those evils we fail to expose."
My spirit was struck as if I had been physically knocked down.  It was all so clear.  We have been accomplices in all the sins of our culture and society!  How many of us inherently know that human trafficking is rampant in our country?  How many times have we watched the nightly news (especially here in Texas and the other border states) and viewed reports of the young women and children who are smuggled into this country to be unwilling participants in the sex trade?  We drive along our freeways and see the neon signs for sleazy strip clubs, but we look away, or we avoid thinking about who is forced to work there, and who is supporting such immoral behavior. 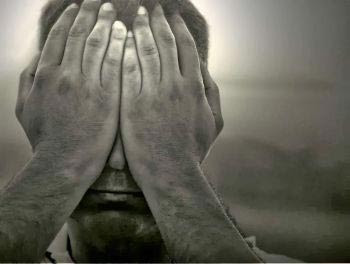 We watch the suggestive advertising on TV which uses young girls and boys to sell merchandise, and we ignore the fact that there is an ugly underbelly that sells them to the highest bidder, or that there are tens of thousands (or more) of children who are exploited by child pornography rings.
We turn our heads whenever our leaders are involved in sex scandals, unscrupulous business dealings, or cover-ups of illegal activities.  Our Christian brethren are forced out of business because they stand for Biblical principals.  Our military veterans are refused benefits or care because of misappropriation of funds or downright neglect.  We see the bruises and silent screams of the abused, yet we turn a blind eye and don't want to get involved.  Votes come before our legislatures to stop the funding of abortion factories, and we sit quietly on the sidelines, hoping they will do the right thing.  We remain tight-lipped when we know that our neighbors are cheating on their spouses ... that is their business.  We send our kids off to college with permission to take birth control, and we hope for the best.  And when they come home spouting anti-God rhetoric, we have no answers for them.  It just all seems so overwhelming ... and need I say more?
But why do we stay quiet?  Most likely because we feel that nothing we do will change anything.  Or it will just end up in an argument, and that gets you nowhere.  But can we see that by doing nothing ... by saying nothing ... and by taking no action, that we are actually accomplices in allowing these sins to continue?  If we fail to expose them; if we fail to shine His Light into the Darkness, then whose side are we on?  Who are we allied with?  I guess we really do need to ask the question, "Will it make any difference"?  At the stage that the world is in now, and with the power that the Prince of this world now enjoys, the answer is "Maybe not."
But I recognize this ... I do not want to stand before my Lord and tell Him I was aware of all this and I never asked, in His Name, for His power to come against this evil; or that I never spoke up for someone, in His Name; or I never stood in defiance against the darkness of this world.  If we refuse to condemn Evil, then by our very silence, we are accepting and allowing sinful behavior to continue.  And one day we will be held accountable for our complicity.  No more excuses ....

Habakkuk 1:13   "You who are of purer eyes than to see evil and cannot look at wrong, why do you idly look at traitors and remain silent when the wicked swallows up the man more righteous than he?"