The Legacy of Pearl Harbor

Seventy-four years ago this morning, at 7:55 a.m., the first modern attack against our nation took place.  As President Franklin Delano Roosevelt said, the Japanese attack on the naval base at Pearl Harbor, Hawaii would "live in infamy."  There are very few survivors left, but their memories of that frightening day are being kept alive by their children; themselves on the far side of middle age.  "What happened was so unfathomable — and not to downplay anything that goes on today — but can you imagine seeing the pilots' eyes and everyone running around to grab their rifles, man their guns and fight back?" said James Laud Sr., Indiana chairman of the Sons and Daughters of Pearl Harbor Survivors. 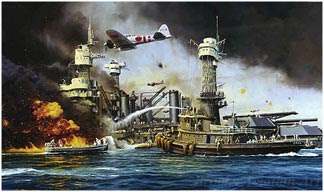 That attack resulted in 2,400 deaths and 1,000 wounded at the Hawaii base, and pushed the United States into World War II.  The survivors of the local Indiana chapter have all died, said Laud, but they have left it to their children to carry forward their message of "Remember Pearl Harbor — Keep America Alert."  That was the legacy that they wanted to leave their children and succeeding generations -- so that this nation would never again be caught unawares of an impending attack, or suffer such devastating losses.
We were able to do that for almost 60 years -- until September 11, 2001.  That was 14 years ago, and the number of Pearl Harbor survivors was far greater than it is today.  In fact, my father, a WW11 veteran was 76 years old on 9/11 and I know how that horrific day affected him.  But for those who actually experienced the sight of the red circles (on the Japanese planes) and the dropping of bombs, it was a particularly distressing day.
One of the youngest survivors of the attack, Machinist Mate 2nd Class Raymond Joseph Crane, enlisted in the Navy at the age of 15, after convincing his mother to sign his enlistment papers.  The dentist who examined him saw he didn't even have his molars yet!
Crane was stationed aboard the USS Maryland, and although the ship was present on Battleship Row that fateful day, it was only slightly damaged by the Japanese bombs, and Crane came home to the heartland to live his life and raise a family.  However, his daughter reports that he had a strong reaction to the attacks on 9/11.  "First of all, dad couldn't believe it happened. He couldn't believe the country failed to be on alert. He was very disturbed somebody was able to invade our country that way."
That became the central focus of the Pearl Harbor survivors, and now their children... to keep this nation alert and vigilant.  Both Pearl Harbor and 9/11 have defined us as a nation.  Both were unwarranted and surprise attacks that devastated our country and set us on the path to war.  And in both these acts of aggression, the primary goal was expansion .... for Japan, expansion of their imperial empire; for al Qaeda, an expansion of their holy war against those they saw as supporting attacks against Muslims. In the ensuing 14 years, that goal has grown to incorporate various jihadi groups across the globe; all intent on subjugating the infidels.  In recent weeks and days, we have seen increasingly brazen attacks across Europe, and now on our West Coast (although I will maintain that the attack on Fort Hood, the Washington Navy Yard shooting, the Boston Marathon bombing, and many others all fall under this heading).
From December 7, 1941 to December 2, 2015 all of our enemies have had one thing in common... the determination to weaken the resolve and the will of the American People.  It didn't happen.  We answered the call in 1941, and again after 9/11.  Sadly, like the Pearl Harbor survivors, I am concerned that efforts have been made to downplay those aspirations and lull us into passivity -- if not outright denial -- that we face a real enemy.
Seventy-four years ago, the patriots of this nation rose to the occasion and swore that they would educate succeeding generations to stay watchful and observant; to quickly notice potentially dangerous circumstances.  Now, we are being told that we are reactionaries, racists, or bigots; that we must be tolerant and accepting of foreign ideologies.  It's time to resist the false narrative and to be honest and unwavering in our vigilance.  It's time to reclaim our heritage.  And it's time to honor the legacy of those brave Pearl Harbor survivors.  May God bless their service to our nation!